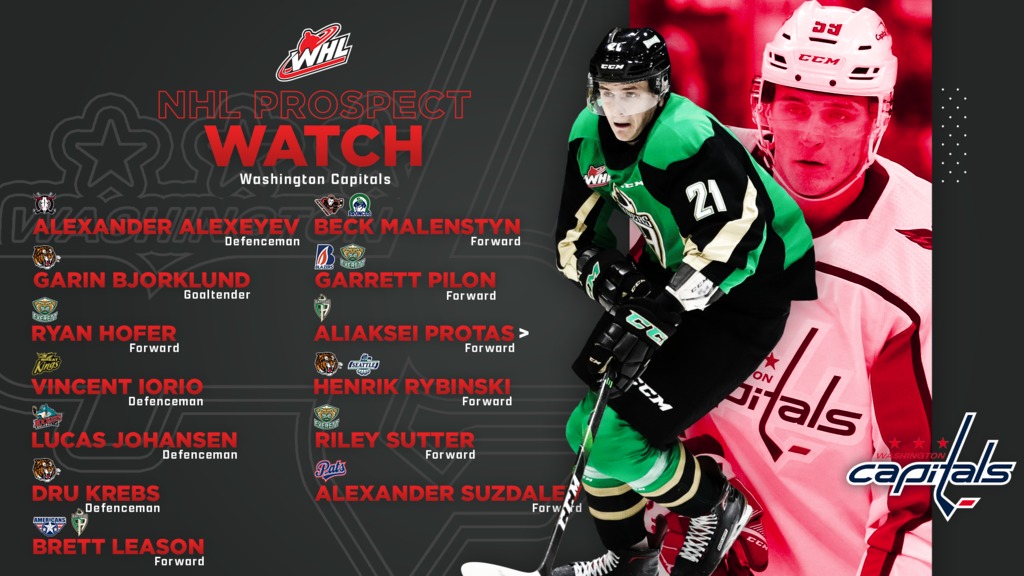 Our series continues with a look at the prospect pool of the Washington Capitals.

Alexander Alexeyev
Selected in the first round of the 2018 NHL Draft, defenceman Alexander Alexeyev made his NHL debut for the Washington Capitals December 29, 2021 against the Nashville Predators. The Russian rearguard appeared in 68 games last season at Hershey of the AHL, scoring once and accumulating 19 points. His three-year WHL career was spent entirely with the Red Deer Rebels, for whom he collected 10 goals and 43 points during the 2018-19 season.

"Think it was pretty good game for me. Play hard, play simple and nothing too crazy. I'm still happy, I think it's really good gift for me for Christmas."

Garin Bjorklund
Goaltender Garin Bjorklund signed a three-year, entry-level contract with the Washington Capitals earlier this year after being selected in the sixth round of the 2020 NHL Draft. The product of Grande Prairie, Alta. made a career-high 48 appearances in 2021-22 for the Medicine Hat Tigers, posting a shutout March 5 against the Swift Current Broncos. Bjorklund went 40-48-3-1 over four seasons in Medicine Hat, posting a career-best .921 save percentage over 18 games during the 2020-21 campaign.

Tigers standout netminder Garin Bjorklund has signed a 3-year ELC with the @Capitals!

Proof that hard work and determination pay off!

Ryan Hofer
Forward Ryan Hofer became the second member of his family to be selected at the NHL Draft when he heard his name called this past July by the Washington Capitals. The product of Winnipeg, Man. broke out in a big way for the Everett Silvertips during the 2021-22 season, scoring 25 times and totalling 58 points to go along with a +30 rating. Hofer scored his first goal of the 2022-23 season in his most recent outing for the Silvertips, a 4-0 victory versus Victoria on October 2.

With the 181st pick in the 2022 NHL Draft, the Washington Capitals are proud to select Ryan Hofer!#CapsDraft pic.twitter.com/ZK3XWtbVxt

Vincent Iorio
A second-round selection by the Capitals in the 2021 NHL Draft, defenceman Vincent Iorio signed an entry-level contract with Washington in October of last year. Iorio, who hails from Coquitlam, B.C., has spent the past four years with the Brandon Wheat Kings including an 11-goal, 44-point campaign in 2021-22. He was assigned to the AHL’s Hershey Bears this past weekend.

🎥HIGHLIGHT OF THE NIGHT🎥

Lucas Johansen
A first-round pick by the Washington Capitals in the 2016 NHL Draft, defenceman Lucas Johansen recorded an assist in his NHL debut December 31, 2021 at Detroit. Johansen, from Port Moody, B.C., was limited to 14 games at AHL Hershey over the course of the 2019-20 and 2020-21 seasons, but returned in style this past season, putting up 28 points from the Bears blueline in 62 games. Johansen won a WHL Championship in 2015, the first of his three WHL campaigns with the Kelowna Rockets.

CAPS TODAY: Rookie defenseman Lucas Johansen has recorded one assist and a +1 plus/minus rating in two games with the Capitals this preseason, including the primary assist on Washington’s opening goal at Detroit on Sept. 30. More info and #Caps clips at https://t.co/HecIC0ECg1 pic.twitter.com/wIBlFdoSg5

Dru Krebs
Like Ryan Hofer, Dru Krebs became the second member of his family to be selected at the NHL Draft when he was picked by Washington in 2021. Krebs, from Okotoks, Alta., set career marks in games played (66), goals (four), assists (15) and points (19), during the 2021-22 campaign for the Medicine Hat Tigers. The 6-foot-0, 178-pound blueliner is expected to again play a big role in Medicine Hat in this, his fourth WHL season.

Brett Leason
A WHL Champion with the Prince Albert Raiders in 2019, forward Brett Leason got into 37 regular season and games with the Washington Capitals during the 2021-22 NHL season. Leason’s first NHL goal came November 1, 2021 at Tampa Bay; he’d finish the campaign with six points at the NHL level while adding six goals and 13 points in 31 games with the AHL’s Hershey Bears. The product of Calgary, Alta. began his WHL career with the Tri-City Americans, playing 81 games south of the 49th parallel before moving to Prince ALbert midway through the 2017-18 season.

Beck Malenstyn
Forward Beck Malenstyn scored his first NHL goal this past season, lighting the lamp for the Washington Capitals November 30, 2021 in an away contest at Florida. A WHL Champion with the Swift Current Broncos in 2018, Malenstyn made 12 appearances at the NHL level in 2021-22, adding 10 goals and 16 points for the Hershey Bears over the course of the season. The product of Delta, B.C. spent the majority of his WHL career with the Calgary Hitmen, scoring 32 goals in 2016-17 before being acquired by Swift Current ahead of the Broncos’ 2018 Championship run.

Garrett Pilon
Former Kamloops Blazers and Everett Silvertips forward Garrett Pilon joined the First NHL Goal Club for the Washington Capitals November 16, 2021 at Anaheim. Pilon, who was born in New York state but calls Saskatoon, Sask. home, put up 17 goals and 42 points for the Hershey Bears in 2021-22 while also appearing in his second and third career NHL contests. As a WHLer, Pilon eclipsed the 15-goal mark in each of his two full seasons with the Kamloops Blazers, scoring 34 times in 2017-18 between the Blazers and Everett Silvertips, helping the Washington-based Club reach the WHL Championship series that spring.

Aliaksei Protas
A WHL Champion with the Prince Albert Raiders in 2019, Aliaksei Protas broke on to the NHL stage for the first time in 2021-22, recording nine points in 33 games. The Belarusian forward scored the first of his three NHL goals November 28, 2021 at Carolina, while adding 24 points in 42 games at the AHL level. Protas registered 120 points over two seasons in the WHL with Prince Albert including a 31-goal, 80-point campaign in 2019-20. He had 22 points in 23 games during the Raiders’ Championship run in the spring of 2019.

Aliaksei Protas is “working to make noise” with the Capitals

“One hundred percent, in games right now, I realize I got better and I got so much work left.” https://t.co/VJNrrf5QD2

Henrik Rybinski
Originally drafted by the Florida Panthers in 2019, forward Henrik Rybinski signed a free-agent contract with the Washington Capitals in March of 2022. The product of Vancouver, B.C. concluded his WHL career by recording 65 points in 47 games for the Seattle Thunderbirds this past season, adding 18 points in 19 games as Seattle captured the Western Conference Championship. Rybinski put up 207 regular season and playoff points over his WHL career, which began with the Medicine Hat Tigers before a move to the Thunderbirds in 2018-19.

Riley Sutter
Selected by Washington in the third round of the 2018 NHL Draft, forward Riley Sutter is embarking on his fourth professional season this winter. The Calgary, Alta. product collected eight points in 39 games with the Hershey Bears a season ago. Sutter spent four seasons with the Everett Silvertips, cracking the 20-goal mark twice and helping Everett win the Western Conference Championship in 2018.

2nd goal of the season for Riley Sutter (@TheHersheyBears) starts the scoring in #HERvsCLE. pic.twitter.com/RXKmsFsxQG

Alexander Suzdalev
A third-round pick by the Washington Capitals in the 2022 NHL Draft, Alexander Suzdalev is off to a strong start in his first season in North America with the Regina Pats. Suzdalev, who put up 51 points in 45 games at the U20 level in Sweden last season, scored twice Wednesday to up his season total to three in his first four games as a Pat. He helped Sweden win a gold medal earlier this year at the 2022 IIHF U18 World Championship.

Or Connor Bedard to Alexander SMOOTH-dalev?