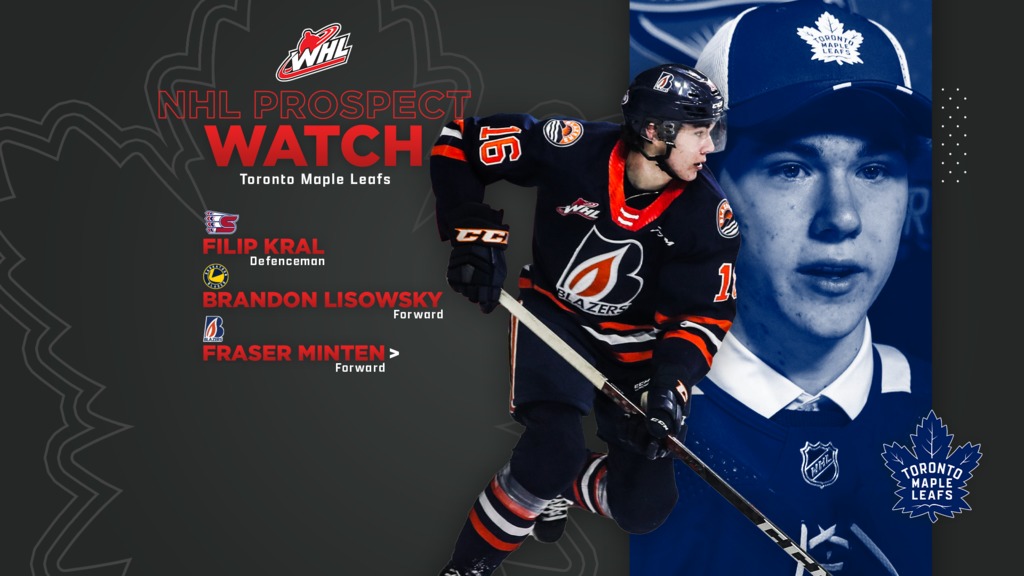 Our series continues with a look at the prospect pool of the Toronto Maple Leafs.

Filip Kral
Defenceman Filip Kral spent three seasons with the Spokane Chiefs and was selected by the Maple Leafs in the 2018 NHL Draft. The Czech blueliner helped Spokane reach the Western Conference Championship series in 2019, scoring at least nine goals and 35 points over each of his three seasons in Washington state. This past season, Kral made 58 appearances with the Toronto Marlies of the AHL, scoring three times and totalling 21 points in his first full AHL season.

What our AHL Player of the Week, Filip Král (@TorontoMarlies), was up to last week ⤵️ pic.twitter.com/Ua0B6SKZlF

Brandon Lisowsky
After finishing tied for second among Saskatoon Blades goal-scoring leaders with 33 during the 2021-22 WHL season, forward Brandon Lisowsky heard his name called by the Toronto Maple Leafs in the seventh round of the 2022 NHL Draft. The product of Port Coquitlam, B.C. is the Blades top returning point-getter from 2021-22, finishing last season with 58 points. Originally selected ninth-overall by Saskatoon in the 2019 WHL Draft, Lisowsky has started the new WHL campaign with four assists through the first three games of the regular season.

With our final pick, we select Brandon Lisowsky.

Fraser Minten
Forward Fraser Minten was selected by the Maple Leafs in the second round of the 2022 NHL Draft after helping the Kamloops Blazers reach the Western Conference Championship series this past spring. Minten, who hails from Vancouver, B.C., concluded the 2021-22 campaign with 20 goals and 55 points, with half of his regular season tallies coming on the power-play. Minten added 16 points in 17 playoff games for Kamloops in 2022.