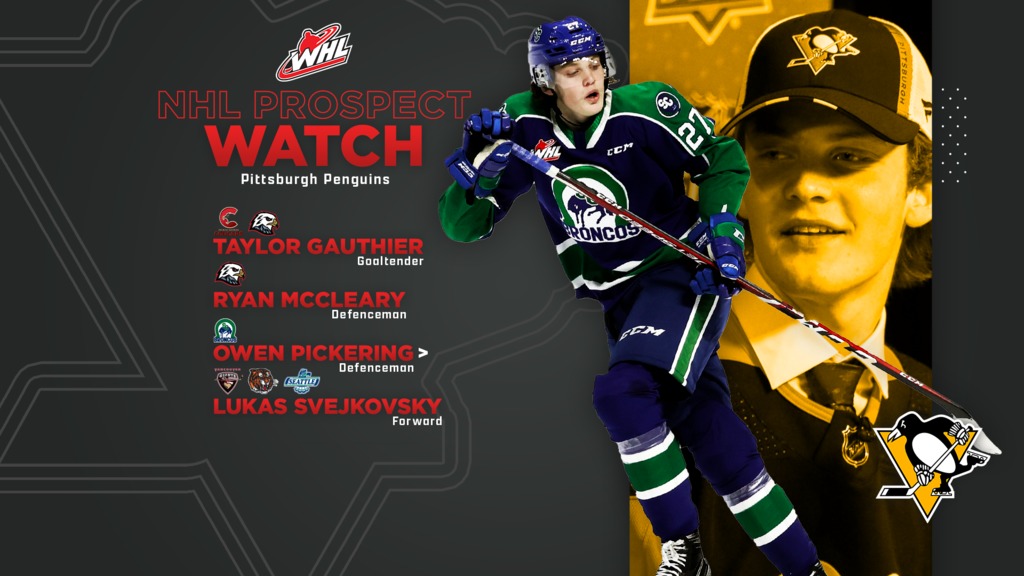 Our series continues with a look at the prospect pool of the Pittsburgh Penguins.

Taylor Gauthier
Goaltender Taylor Gauthier signed an entry-level contract with the Pittsburgh Penguins in March, and concluded his WHL career with 205 regular season and playoff appearances with the Prince George Cougars and Portland Winterhawks. Gauthier, who hails from Calgary, Alta., was selected 10th-overall by Prince George in the 2016 WHL Draft and spent four-and-a-half seasons in Northern B.C. before a move to the Rose City in December of 2021. As a Winterhawk, Gauthier thrived, setting the franchise shutout minutes streak and posting a .931 save percentage over 28 games played, leading the League with a .925 SV% over the course of the regular season. He embarked on his lone WHL Playoffs campaign in the spring of 2022, sweeping his former Cougars teammates and posting a 7-4 record over 11 starts.

The Penguins have signed undrafted free agent forward Jordan Frasca and goaltender Taylor Gauthier each to a three-year, entry-level contract.

Ryan McCleary
A seventh-round selection by the Pittsburgh Penguins in the 2021 NHL Draft, defenceman Ryan McCleary collected six goals and 30 points over the course of the 2021-22 WHL season. The product of Swift Current, Sask. was selected by Portland in the fifth round of the 2018 WHL Draft and in 92 career regular season and playoff games holds a cumulative +34 rating to go along with 37 points.

"You can’t live your life hoping something doesn’t happen."

Twenty-two years ago, hockey nearly took everything from Trent McCleary.

Today, it's given him everything in two children who play the sport, including Penguin prospect Ryan McCleary.https://t.co/AfUNGbEqjO

Owen Pickering
Hailing from St. Adolphe, Man., defenceman Owen Pickering hurtled up the NHL Draft rankings over the course of the 2021-22 season before being selected 21st-overall by the Penguins at the 2022 NHL Draft this past July. The Swift Current Broncos blueliner was one of five Broncos selected at this year’s Draft; he scored nine times and totalled 33 points over his first full WHL season, earning a nod on the Central Division Second All-Star Team for his efforts.

The newest member of the @penguins, Owen Pickering of the @SCBroncos, met the media after being selected 21st overall in the #NHLDraft. pic.twitter.com/vruMZPZfeF

Lukas Svejkovsky
A fourth-round pick by Pittsburgh in the 2020 NHL Draft, Lukas Svejkovsky concluded his WHL career in June by winning his second Western Conference Championship as a member of the Seattle Thunderbirds. From Point Roberts, Wash., Svejkovsky reached the WHL Championship series with the Vancouver Giants in 2019 as well, also spending time with the Medicine Hat Tigers over the course of his career. Svejkovsky was dealt from Medicine Hat to Seattle just after the holiday break in December; he scored 22 goals in 33 games as a Thunderbird before helping Seattle’s post-season run with 11 goals and 28 points over 24 games in the 2022 WHL Playoffs.

The Penguins have signed forward Lukas Svejkovsky to a three-year, entry-level contract.