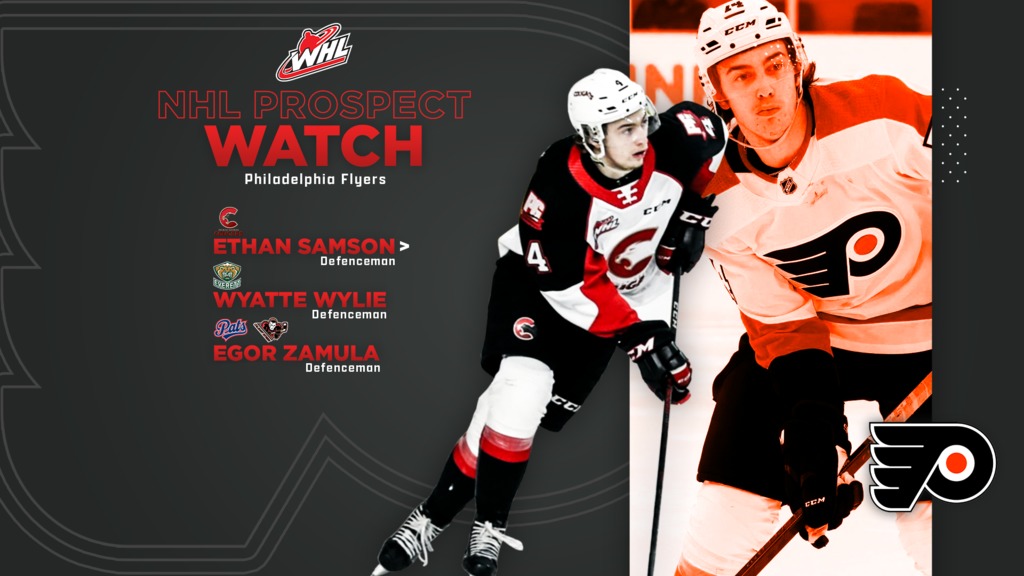 Our series continues with a look at the prospect pool of the Philadelphia Flyers.

Ethan Samson
Selected by the Flyers in the 2021 NHL Draft, defenceman Ethan Samson finished the 2021-22 campaign by leading all Prince George Cougars defencemen with 15 goals. The product of Delta, B.C. helped the Cougars return to the WHL Playoffs in 2022, finishing fourth in team scoring with 43 points. Samson is poised to again be one of the leaders on the Prince George blue line during the 2022-23 WHL season.

Wyatte Wylie
Defenceman Wyatte Wylie begins his third season in the Philadelphia Flyers organization after recording five goals and 18 points for the AHL’s Lehigh Valley Phantoms in 2021-22. Wylie patrolled the blueline for four seasons in the WHL with his hometown Everett Silvertips, twice collecting double-digits in goals and concluding his WHL career with a 64-point campaign in 2019-20. He was originally selected by Philadelphia in the fifth round of the 2018 NHL Draft.

Bringing it to Broad.

Egor Zamula
Defenceman Egor Zamula got into 10 NHL contests with the Flyers in 2021-22, upping his career NHL games played total to 12 through two professional seasons. In 58 games at AHL Lehigh Valley last season, Zamula totalled 29 points. Zamula spent three seasons in the WHL, splitting the 2017-18 campaign between the Regina Pats and Calgary Hitmen before recording 84 points over his final two WHL seasons in the Stampede City.

Egor Zamula calls it a “dream come true” to play alongside fellow-Russian Provy. “To me he’s the top-one or top-two Russian defenseman in the league,” he said later in the interview (not this one). #Flyers pic.twitter.com/A70j2bX4pA