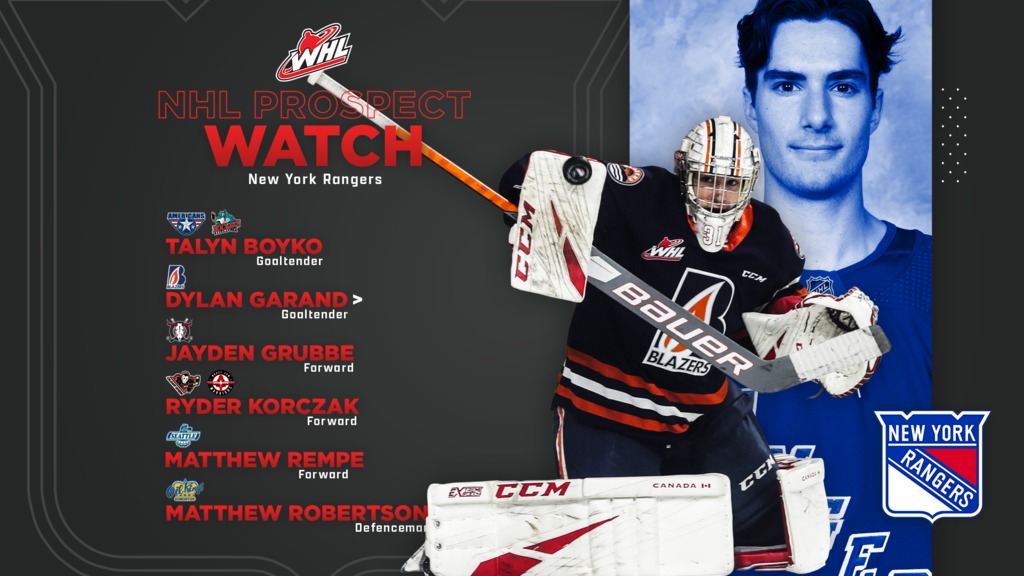 Our series continues with a look at the prospect pool of the New York Rangers.

Talyn Boyko
Selected in the fourth round of the 2021 NHL Draft, goaltender Talyn Boyko split the 2021-22 WHL season between the Tri-City Americans and Kelowna Rockets. With Kelowna, the product of Drumheller, Alta. posted a 28-12-1-3 record, 2.79 goals-against average and .913 save percentage, posting a pair of road shutouts against the Vancouver Giants and Prince George Cougars along the way. The 6-foot-7, 200-pound puck-stopper has appeared in 107 regular season and playoff games in the WHL since he was selected by Tri-City in the third round of the 2017 WHL Draft.

Dylan Garand
The reigning WHL and CHL Goaltender of the Year, Dylan Garand capped off his summer by back-stopping Canada to a gold medal at the 2022 IIHF World Junior Championship in Edmonton. Garand, who hails from Victoria, B.C., posted a 34-9-1-0 record with the Kamloops Blazers in 2021-22, finishing second among WHL goaltenders with a 2.16 goals-against average and .925 save percentage, upping those figures to 1.92 / .933 over the course of 17 games in the 2022 WHL Playoffs. Garand, who was named the WHL’s Scholastic Player of the Year in 2020, holds a career .919 save percentage over 136 regular season outings with the Blazers.

Jayden Grubbe
Red Deer Rebels captain Jayden Grubbe was a third-round pick by the New York Rangers in the 2021 NHL Draft. The Calgarian put up 35 points in 2021-22 for the Rebels, appearing in all 68 games after missing the bulk of the 2020-21 campaign due to injury. Grubbe added four points during the 2022 WHL Playoffs as Red Deer reached the Second Round for the first time in six years.

Ryder Korczak
A set-up man extraordinaire, Ryder Korczak finished second among Moose Jaw Warriors scoring leaders in 2021-22 with 54 assists and 79 points. His 54 helpers were good enough to lead the team for the third consecutive season, while Korczak’s 79 points were a career best. He’d go on to post 13 points in the post-season, too, as Moose Jaw reached the Second Round. From Yorkton, Sask., Korczak signed an entry-level contract with the Rangers this past May after being selected in the third round of the 2021 NHL Draft. In 200 WHL regular season games with the Warriors and Calgary Hitmen, he has put up 123 assists and 177 points.

Matthew Rempe
Forward Matthew Rempe brings size and skill to the New York Rangers prospect pool, and enters the 2022-23 season after helping the Seattle Thunderbirds reach the WHL Championship series. From Calgary, Alta., Rempe scored 17 times during the 2021-22 regular season for Seattle, adding eight goals and 12 points in 24 playoff games this past spring. The 6-foot-9, 240-pound forward was a sixth-round pick by the Rangers in the 2020 NHL Draft; he signed an entry-level contract last fall.

Matthew Robertson
Defenceman Matthew Robertson begins his second professional season this fall after making 65 appearances in 2021-22 with the Hartford Wolf Pack of the AHL. Robertson put up 11 points from the Wolf Pack blue line after spending parts of five seasons patrolling the back end for the Edmonton Oil Kings. During his time in Edmonton, Robertson was named to the Eastern Conference Second All-Star Team in 2020, and the Central Division Defenceman of the Year in 2021. 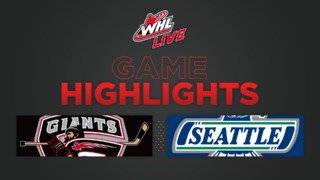