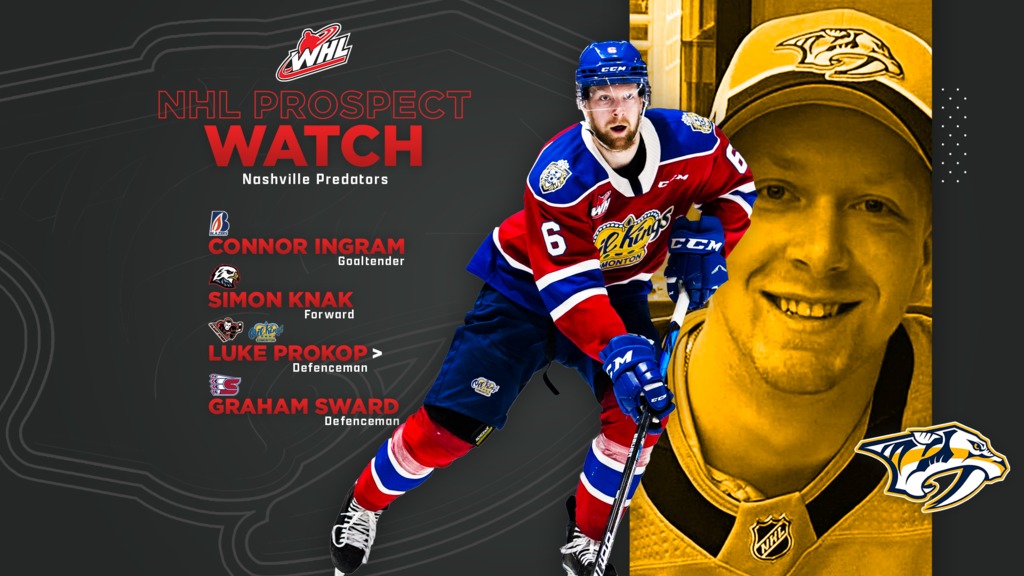 Our series continues with a look at the prospect pool of the Nashville Predators.

Connor Ingram
Former Kamloops Blazers goaltender Connor Ingram made his NHL debut October 24, 2021, making 35 saves in a 5-2 victory over the Minnesota Wild. Ingram, from Imperial, Sask., played in two further NHL contests over the course of the regular season before being called into action in the 2022 Stanley Cup Playoffs. Ingram posted a .913 save percentage over four post-season appearances, making 161 saves over 231 minutes of work in a four game series against the eventual Stanley Cup Champion Colorado Avalanche. As a Blazer, Ingram served as the number one goalie in Kamloops for three seasons, earning a pair of Western Conference Second All-Star Team nods in 2016 and 2017.

Simon Knak
Swiss forward Simon Knak spent two seasons in the WHL with the Portland Winterhawks, collecting 34 points in 2019-20 and then tallying 16 goals in 24 games during the shortened 2020-21 campaign. Knak was selected by the Predators in the sixth round of the 2021 NHL Draft, and spent the 2021-22 season with HC Davos in his home country, totalling 11 points in 42 games. Last month, Knak captained Switzerland’s entry at the 2022 IIHF World Junior Championship in Edmonton.

Simon Knak tips one home to tie the game early in the 1st period.#WorldJuniors pic.twitter.com/Rvf3awmxUO

Luke Prokop
Defenceman Luke Prokop made the most of an early-season trade to his hometown Edmonton Oil Kings last fall. The third-round selection of the Nashville Predators in the 2020 NHL Draft spent parts of five seasons with the Calgary Hitmen before the move, and in 55 games with the Oil Kings Prokop collected 33 points and a +38 rating. He added 16 points in 19 games during the 2022 WHL Playoffs as the Oil Kings captured the 2022 WHL Championship. Prokop’s influence has extended beyond the ice too; the 20-year-old was named the WHL and CHL Humanitarian of the Year earlier this year.

The winner of the CHL Humanitarian of the Year Award is Luke Prokop of @EdmOilKings!

The Award is presented to the player judged to have made the most notable contributions to his community along with success in school.#CHLAwards pic.twitter.com/0tac5OTFxd

Graham Sward
Spokane Chiefs blueliner Graham Sward heard his name called by Nashville in the fifth round of the 2022 NHL Draft. Sward, from Abbotsford, B.C., finished fourth in team scoring, and first among Chiefs defencemen in 2021-22 with 10 goals and 43 points, helping a young Spokane squad qualify for the 2022 WHL Playoffs. Sward was originally selected 17th-overall by the Chiefs in the 2018 WHL Draft.

Another pick is in! With the 146th overall pick in the 2022 #NHLDraft, the Nashville Predators have selected Graham Sward from the WHL's Spokane Chiefs pic.twitter.com/Rew6VAb3gI