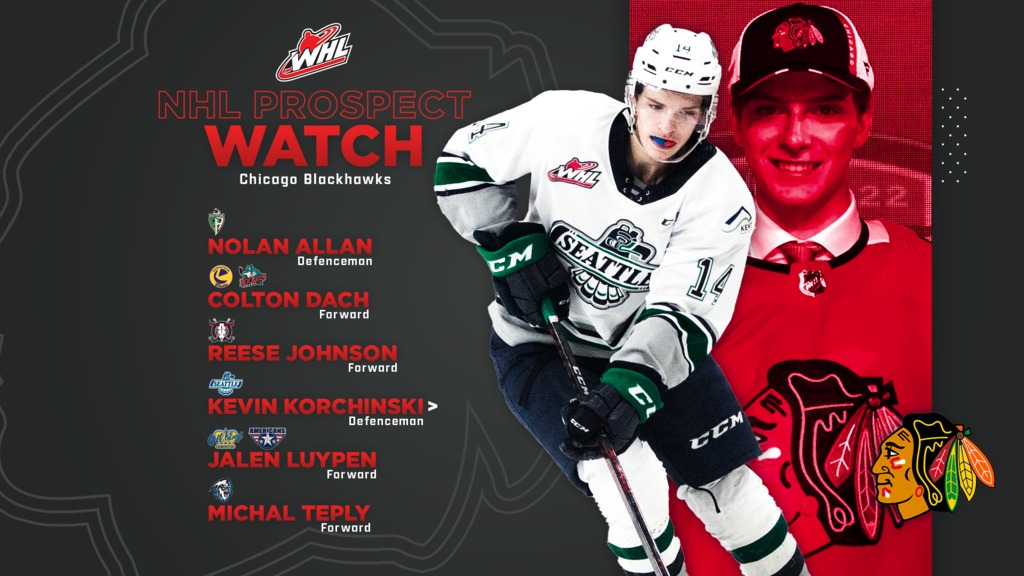 Our series continues with a look at the prospect pool of the Chicago Blackhawks.

Nolan Allan
A first-round selection by the Blackhawks in the 2021 NHL Draft, defenceman Nolan Allan enjoyed a career year with the Prince Albert Raiders in 2021-22. The product of Davidson, Sask. collected 41 points (7G-34A) over 65 games before making his WHL Playoffs debut with Prince Albert this past spring. Allan, who won a gold medal with Canada at the 2021 IIHF U18 World Championship, signed his entry-level contract with Chicago in September of 2021.

Colton Dach
Forward Colton Dach led the Kelowna Rockets in scoring with 79 points in his first WHL season in the Okanagan. The product of Fort Saskatchewan, Alta. was dealt to the Rockets shortly after being selected by the Chicago Blackhawks in the second round of the 2021 NHL Draft. Dach, who attempted more than 1,000 face-offs last season in Kelowna, has averaged a point per game or better in each of his last two WHL seasons.

📽️ HIGHLIGHT OF THE NIGHT 📽️

Reese Johnson
Former Red Deer Rebels captain Reese Johnson made 37 appearances with the Chicago Blackhawks in 2021-22, collecting a total of six points. The product of Regina, Sask. scored his first NHL goal November 23, 2021 at Calgary; he now has 42 NHL contests under his belt after three full seasons in the Blackhawks organization. Johnson spent his entire WHL career with the Rebels, completing his time in Central Alberta in 2018-29 with a 27-goal, 53-point season.

Kevin Korchinski
Defenceman Kevin Korchinski was the first WHL player selected in the 2022 NHL Draft, going seventh-overall to the Blackhawks this past July. Korchinski, from Saskatoon, Sask., helped the Seattle Thunderbirds reach the 2022 WHL Championship series after totalling 84 points over the 2021-22 regular season and playoffs. His 61 assists during the regular season led all WHL rookies and were second-most among WHL defencemen. Korchinski signed a three-year, entry-level contract with Chicago in August.

We begin our series by hearing from Seattle defenceman Kevin Korchinski, the seventh-overall pick in this year's NHL Draft!@NHLBlackhawks | @SeattleTbirds pic.twitter.com/OzjoESPloR

Jalen Luypen
A WHL Champion with the Edmonton Oil Kings this past season, forward Jalen Luypen signed a three-year, entry-level contract with the Chicago Blackhawks in August. Luypen, who was selected in the seventh round of the 2021 NHL Draft, set career bests with the Oil Kings in 2021-22 with 29 goals and 64 points. He added nine points during Edmonton’s playoff run, then chipped in with a goal and two assists during the 2022 Memorial Cup presented by Kia in Saint John, N.B. Luypen’s WHL rights were dealt by Edmonton to the Tri-City Americans last month.

Everyone say hello to Jalen 👋 pic.twitter.com/LtFExThTBE

Michal Teply
Czech forward Michal Teply spent one season in the WHL, posting 29 goals and 63 points in 2019-20 with the Winnipeg ICE; his point totals led all WHL first-year players. A fourth-round selection by the Chicago Blackhawks in the 2019 NHL Draft, Teply collected 13 goals and 31 points for the Rockford IceHogs of the AHL in 2021-22, adding an assist in five post-season outings.

Michal Teply with the finish to give the @goicehogs a 4-3 win in the shootout. pic.twitter.com/WdGXGPjsrt