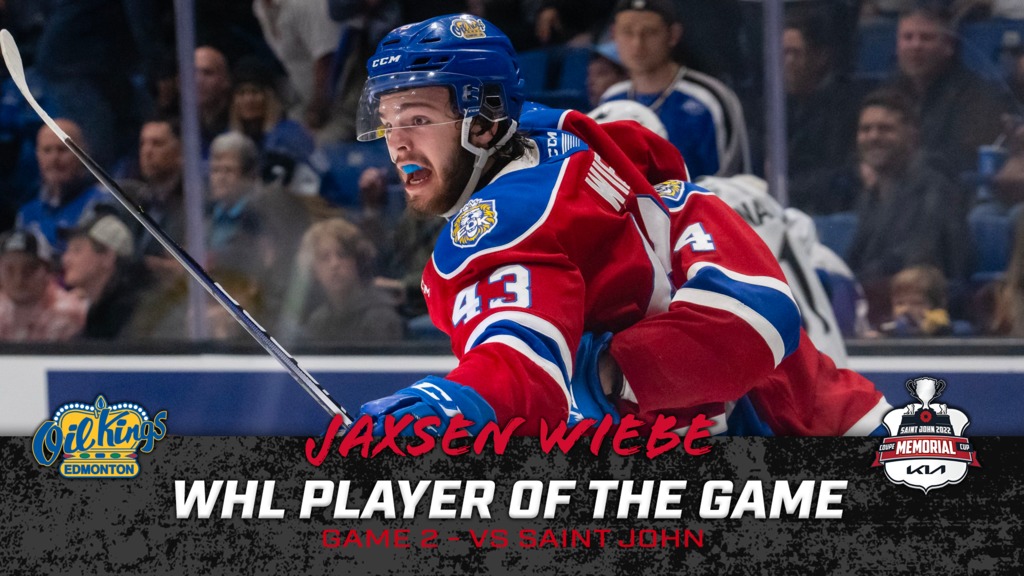 Saint John, N.B. – Veteran forward Jaxsen Wiebe had himself a night to remember, registering three goals, including the overtime winner, as the Edmonton Oil Kings staked out a 4-3 triumph over the host Saint John Sea Dogs at the 2022 Memorial Cup presented by Kia on Wednesday evening.

The product of Moose Jaw, Sask., opened the scoring with a power-play marker 2:14 into the first period, kickstarting the Oil Kings early. Moments later, he answered the bell when Riley Bezeau challenged him to a fight.

After falling behind 3-2, Wiebe registered his second goal of the game 2:05 into the second period, once again on the man advantage, tying the game 3-3. Following a scoreless third period, it was Wiebe’s tally that stood up as the game-tying effort.

A back-and-forth nail-biter of an overtime period could have ended on numerous occasions if not for the play of the two goaltenders – Sebastian Cossa for the Oil Kings and Nikolas Hurtubise of the Sea Dogs.

Finally, after 8:05 worth of edge-of-your-seat action, it was Wiebe burning down the right wing and wiring a hot shot to the top corner, ending the game and completing the hat trick all in one massive moment for the Oil Kings.

Aside from his three goals, Wiebe made an impact in the faceoff circle as well, going 7/10.

📽️ HIGHLIGHT OF THE NIGHT 📽️