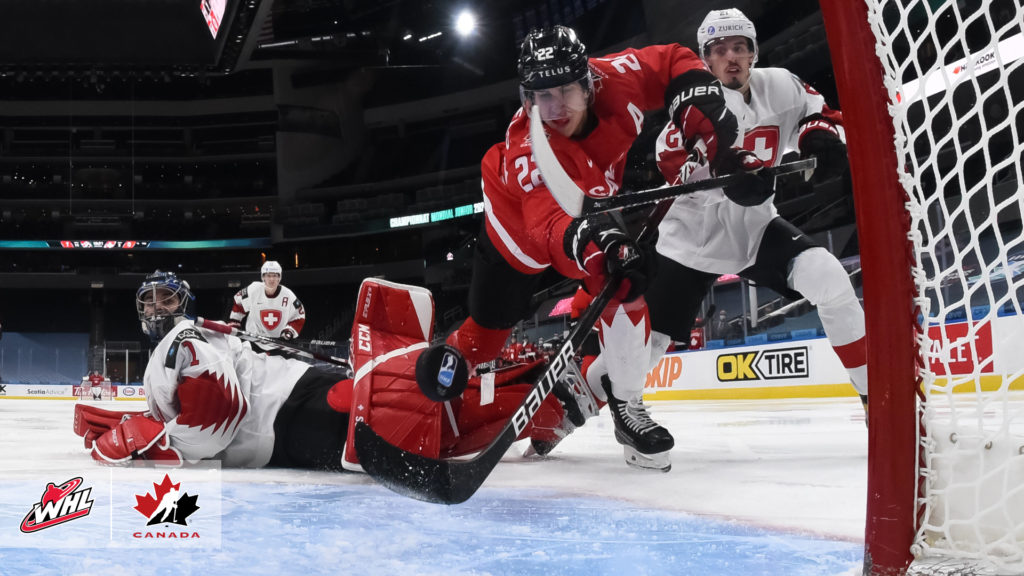 Cozens, a prospect of the Buffalo Sabres, continued to make his presence felt, registering his fourth goal of the tournament 1:40 into the second period of play, extending Canada’s lead to 2-0. The product of Whitehorse, Yukon, redirected a Cole Perfetti point shot on the power play before pouncing on his own rebound to give Canada some insurance.

Cozens recorded his second point of the night when he forced a turnover deep in Swiss territory, before feeding London Knights forward Connor McMichael, giving Canada a commanding 5-0 lead late in the second period.

The Lethbridge Hurricanes star has been one of Canada’s best and most consistent forward through three games in the tournament, as he sits second in event scoring with nine points (4G-5A). Cozens wasn’t the only WHL player to make his mark on Tuesday.

Midway through the second period, Kamloops Blazers forward Connor Zary registered his first point of the tournament, contributing a primary assist on Canada’s third goal by Jakob Pelletier. The two Calgary Flames prospects hooked up to boost Canada once again, making it 3-0.

With the game out of reach in the third period, Winnipeg ICE forward Peyton Krebs executed yeoman’s work down low before getting the puck out to Perfetti, who wired it home for an 8-0 lead. Moments later, Krebs set up Prince Albert Raiders defenceman Kaiden Guhle, who found the back of the net with his second goal of the tournament, making it 9-0 for Canada. Kelowna Rockets defenceman Kaiden Korczak also notched a helper on the play.

Having claimed another win, Canada moves to 3-0-0 and will take on Finland on Thursday, December 31 at 4 p.m. MT with Group A supremacy on the line.