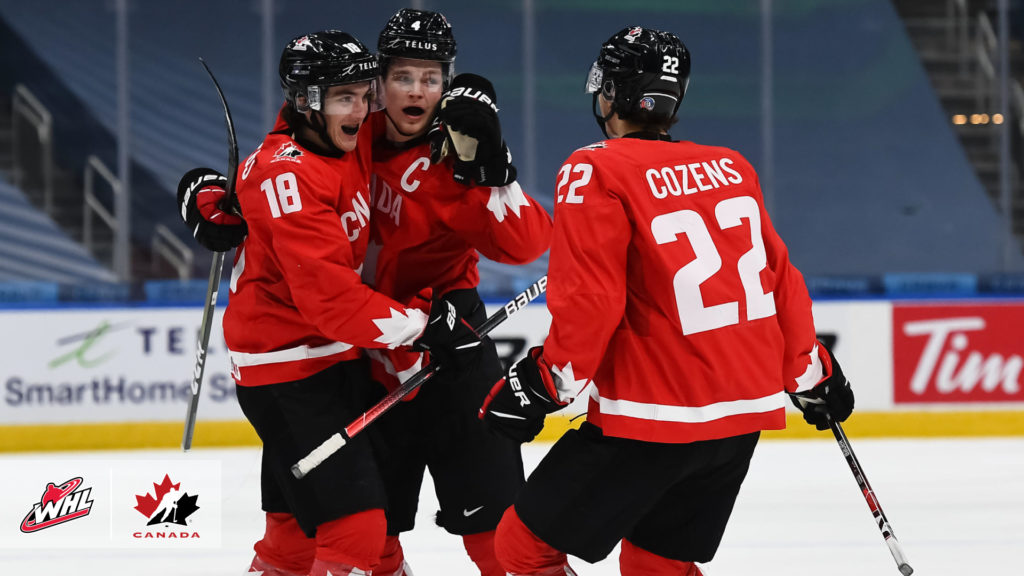 Edmonton, Alta. – Canada has advanced to the semifinals of the 2021 IIHF World Junior Championship, following a 3-0 win over the Czech Republic on Saturday night.

Cozens, a prospect of the Buffalo Sabres, continued to fill the net, opening the scoring with his seventh goal of the tournament. After breaking up a Czech zone entry, Cozens turned and took a lead feed from Connor McMichael before sneaking a shot through Czech goaltender Nick Malik for a 1-0 Canadian advantage.

Cozens, the product of Whitehorse, Yukon, added an assist later in the night. With the helper, he hit 13 points through five games in the 2021 tournament, becoming the first Canadian player to do so since former Red Deer Rebels forward Ryan Nugent-Hopkins (2013). The 6-foot-3, 198-pound Cozens now sits tied atop the scoring charts for the 2021 World Juniors. American forward Trevor Zegras has also registered 13 points.

Midway through the first period with Czech forward Adam Raska serving a minor penalty, Canada controlled the puck in Czech territory. Sporting the captain’s ‘C’ for the quarter-finals, Byram, a prospect of the Colorado Avalanche, displayed great patience as he dipped towards the right faceoff circle before wiring a wrist shot under the blocker arm of Malik. While time on the power play had just expired, Byram’s first of the tournament gave Canada some insurance in the form of a 2-0 lead.

The two teams exchanged opportunities through the second period and the third, before McMichael iced the outcome with an empty-net tally.

By the time the final buzzer sounded, Winnipeg ICE forward Peyton Krebs had recorded two assists with Prince Albert Raiders defenceman Kaiden Guhle collecting a helper of his own. Krebs, a prospect of the Vegas Golden Knights, now has eight points (3G-5A) through five contests.

Canada outshot the Czech Republic 29-25 in the win.

With the victory, Canada advances to the semifinals, which are scheduled for Monday (4 p.m. MT / 7:30 p.m. MT). While Canada is locked into the 3:30 p.m. MT time slot, its opponent remains to be determined.

Wasn’t a question of if Dylan Cozens would score, simply a matter of when.@WHLHurricanes | #WorldJuniors https://t.co/2YLLVaoZOk