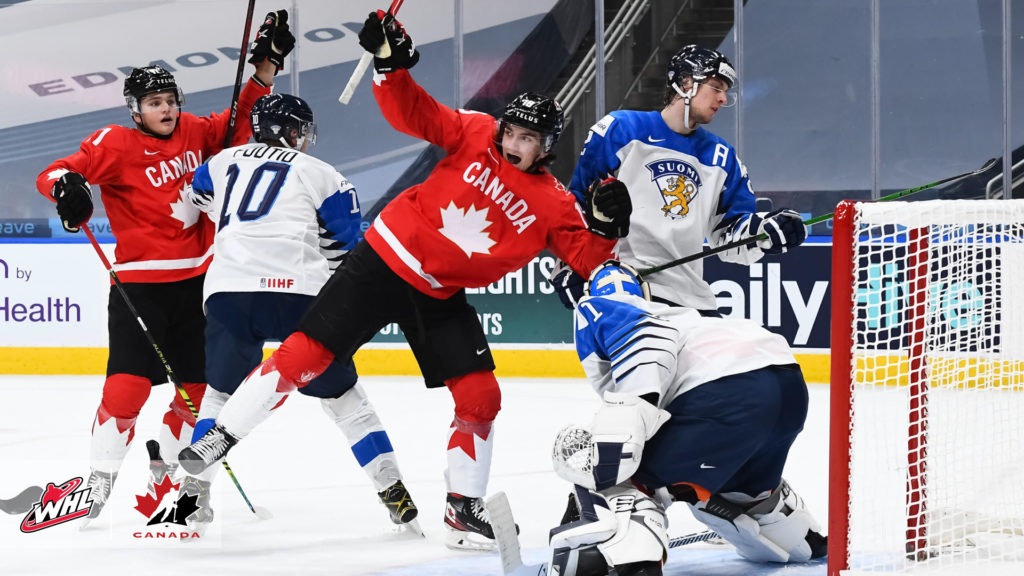 Edmonton, Alta.– Canada has laid claim to Group A following a dominant 4-1 victory over Finland on Thursday evening at the 2021 IIHF World Junior Championship.

Cozens, who has affectionately been dubbed the “Workhorse from Whitehorse,” served as a spark for Canada from the first drop of the puck, opening the scoring with his fifth of the tournament only 3:49 into the first period. For Canada, the goal by Cozens, who was selected seventh overall by the Buffalo Sabres in the 2019 NHL Draft, was all they managed to put past Finnish netminder Kari Piiroinen during the first period of play, despite outshooting Finland by a hefty margin of 17-1.

Canada managed to pad the advantage during the second period of play, with Winnipeg ICE captain Peyton Krebs recording his first goal of the night to make it 3-0. The prospect of the Vegas Golden Knights has quietly been very effective for Canada at both ends of the rink, and has six points (3G-3A) to his name as a result.

Finland was finally able to solve the Canadian defense early in the third period, as Brad Lambert – who was selected by the Saskatoon Blades in the 2020 CHL Import Draft – found the back of the net 5:05 into the third period, cutting Canada’s lead to 3-1.

Cozens sealed the deal with a hard-working effort on an empty-net goal with 1:17 to go in regulation.

At the end of the night, Canada had outshot Finland 40-19.

With the win, Canada finished the preliminary round undefeated (4-0-0) and takes first place in Group A. They will face the Czech Republic on Saturday in quarter-final competition.

World Juniors News & Notes: Germany has qualified for the quarter-finals for the first time in World Junior Championship history… The Czech Republic is through to the quarter-finals, thanks largely in part to a big performances from WHL players on Thursday afternoon in a 7-0 win over Austria, including Moose Jaw Warriors forward Martin Lang (2G-1A), Winnipeg ICE forward Michal Teply (1A), Seattle Thunderbirds defenceman Simon Kubicek (1G-1A), and Kelowna Rockets forward Pavel Novak (1G-2A)… The Czech Republic also got contributions from a pair of CHL Import selections from the WHL, as defencemen Stanislav Svozil (1A) of the Regina Pats and David Jiricek (1G-1A) of the Spokane Chiefs got in on the offense…

A tale as old as time… Dylan Cozens with another! 🇨🇦@WHLHurricanes | #WorldJuniors https://t.co/sLtzT0lwPR