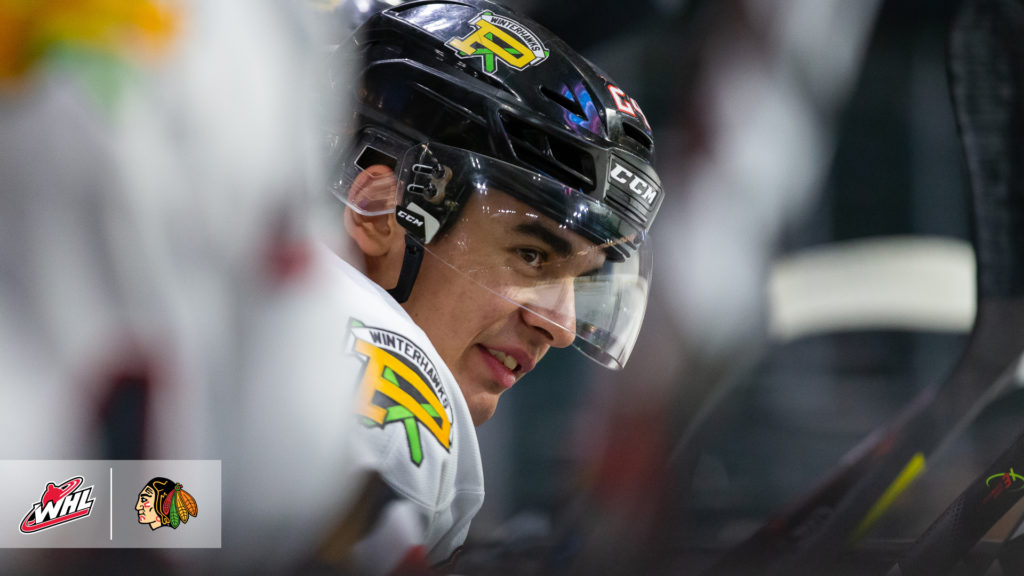 When the Portland Winterhawks called out Seth Jarvis’ name at the 2017 Western Hockey League Bantam Draft, they knew they were getting a skilled player.

The Winnipeg, Man. product was coming off a 66-point (42G-24A) season in 30 games with the Rink Hockey Academy Bantam Prep team the competed in the Canadian Sport School Bantam Hockey League.

Two-and-a-half years later, the pairing of Jarvis’ skills and the Winterhawks’ system has provided a perfect match. It has the 11th-overall selection from that year’s WHL Bantam Draft high on the rankings of NHL scouts and the Winterhawks leading the WHL’s U.S. Division and Western Conference.

“I’ve been watching for I don’t know how long,” Jarvis said of the draft. “I never really clued into this could be something I could go through until the last couple of years when talk started coming up a little bit more.

“It’s definitely something I’ve always watched and dreamed of going in.”

A ‘B’-rated prospect by NHL Central Scouting, Jarvis has patiently, yet quickly taken on a leading role in just his second full season. His 28 points (12G-16A) in 24 games ranks him second on the Winterhawks and fourth in the WHL among 2002-born players.

“When we drafted him, we really liked his skill and his speed,” Winterhawks head coach Mike Johnston noted. “He’s continued to show that that’s at a top end here in this league.

“He’s fast on the rush, quick counter-punch guy. He’s got a real scoring touch in tight.”

Though Jarvis has worked for everything in his hockey career to date, the foundation to draw from in Portland has certainly been invaluable as well.

“Coming here at 16 was huge for me,” Jarvis added. “Mike, Don [Hay], and the guys here are all unbelievable coaches.

“Anything I can learn from them is beneficial to me.”

Jarvis also took plenty from his captain and fellow Winnipegger Cody Glass. An 11-game appearance during the 2017-18 WHL Regular Season came with a chance to learn from the Vegas Golden Knights prospect while the pair overlapped for the majority of the 2018-19 WHL Regular Season as well.

“Watching how Cody handles himself was big,” Jarvis said. “Just how calm he was and then how he never let anything get him too high or too low.

“He just kept a level-headed mentality and just went with the flow and then performed at his peak, especially when it mattered most.”

Johnston echoed Jarvis’ comments regarding the benefit the team’s older players have had on those rising through the ranks.

“That’s the best experience our players can have if other guys in the room have gone through it,” Johnston said. “Last year, he was around Cody Glass who had been through it and [Joachim] Blichfeld.

“I think that helps a young guy.”

Having a level-headed mentality has stuck with Jarvis most of all. The 5-foot-10, 172-pound forward has checked the draft rankings, but isn’t concerned with them as they seemingly fluctuate from day to day. Going up against other top-tier players in his draft class or those who have already gone through the process themselves doesn’t faze him either. Easy come, easy go.

“I don’t focus too much on those matchups,” Jarvis said. ” I focus on being the best player on the ice, regardless of who else is out there, no matter if its Connor Zary or someone like Ty Smith, who has already been through the draft.”

Jarvis is also part of a quintet of NHL Draft prospects on the Winterhawks. While all are eager to put their best foot forward before June, they’re not letting their individual success come ahead of that of the team’s.

“We all want the best for each other so I think it’s all in friendly competition,” Jarvis continued.

When NHL scouts look at Jarvis, they’ll no doubt see the power forward with a wicked shot and skills to spread the offence to his teammates. They’ll also get a better picture of his skills in his own end, something Jarvis has taken pride in strengthening.

“I think his overall game, even this year at 17 years of age, he plays the power play and he kills penalties for us,” Johnston said. “He’s an all-around player right now.”

Make no mistake though, if Jarvis gets the chance to bury the puck in his opponent’s net, there aren’t many who are going to be able to stop him. It’s what made him successful in minor hockey and it’s still a consistent part of his game as a two-way player today.

“If I’m trusted with offence, I know my abilities so whenever it comes down to my time to help out and provide offence I think I have full trust in myself.”