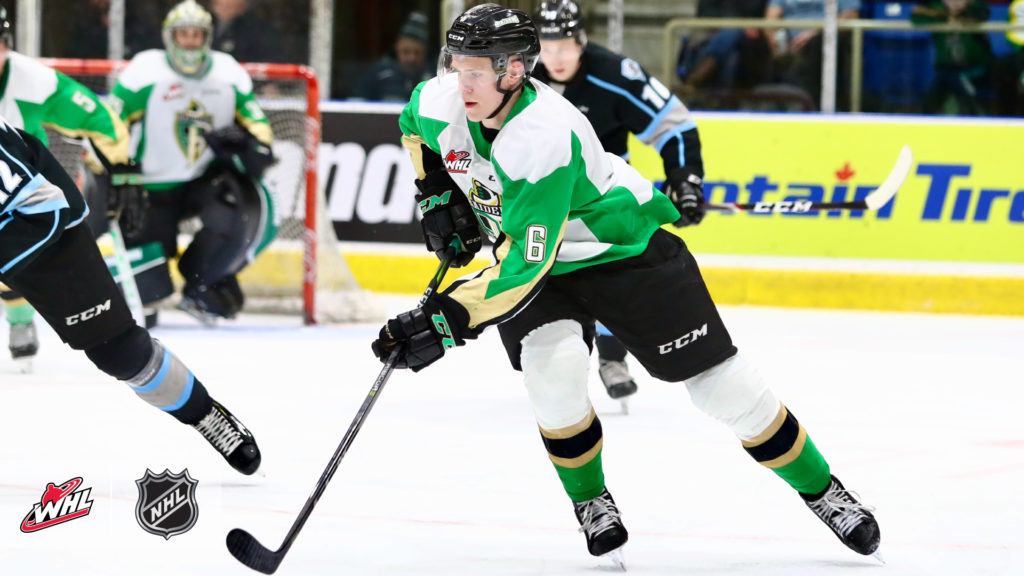 Though he faces high-pressure situations in every game and an ever-widening scope of interest based on his ranking by National Hockey League Central Scouting for the 2020 NHL Draft, you wouldn’t know it in talking to Prince Albert Raiders defenceman Kaiden Guhle.

When Guhle speaks, his calm presence flows out. For the 18-year-old defenceman in the Western Hockey League, the calculated and collected mindset comes from a wealth of experience he’s already gained in the hockey world.

“Whatever happens, happens,” said Guhle about his forthcoming draft day. “At the end of the day, it’s whatever team wants me.

As captain of the OHA Edmonton Bantam Prep “C” in the 2016-17 season, Guhle was the Canadian Sport School Hockey League’s Top Defenceman for the Bantam Prep Division.

That connection with his brother is one link in a strong support network that has allowed him to chart his path in the WHL. He hopes it will one day take him to the professional hockey ranks.

“He just tells me to be myself,” said Guhle of his relationship with his brother. “They’re going to want to pick me because of the type of person I am.

“The worst thing you can do is change what type of person you are, and they pick you for some who you’re not.”

After gaining a brief experience with the Raiders during the 2017-18 WHL Regular Season, Guhle became a key part of the team’s young core that contributed to their WHL Championship run in 2019.

“As good a player as he is, he’s a better person,” said Raiders head coach Marc Habscheid. “He gets life, he gets being a good teammate. He gets being coachable.”

Winning with that group last season played an important part in Guhle’s development moving into the 2019-20 season and beyond, even if he had to be patient as he worked his way up the team’s depth chart.

“[Assistant coach] Jeff Truitt did a good job of putting him in positions to succeed,” added Habscheid. “He kept his confidence and he knew he was on a good team, so he was patient and never complained.”

Now that the mantle on the Raiders has been passed to Guhle and a fellow Albertan like forward Ozzy Wiesblatt, he was eager to emerge from the season as an all-around better defenceman. It’s that development path and mindset that will have NHL teams eager to choose Guhle to become a part of their future.

“It’s the best feeling,” said Guhle. “Just getting a taste of that at a high level at such a young age is something that you’re going to want to do every year.

“It’s something that I strive for every year and our team strives for.”

With Guhle focusing on bettering his defensive game this season, there also came an opportunity to take more of a lead offensively too. He posted 40 points (11G-29A) in 64 games to rank in a tie for 18th in scoring among WHL defencemen, not that Guhle puts a great deal of stock in scoresheets or how his totals compare to others.

What matters more is that the Raiders claimed back-to-back East Division titles.

Also, what pushes Guhle to those offensive totals and improved defensive game is his personal desire to see each task, no matter how small, through to the end.

He also couples that with the knowledge that others want to be ranked in his spot or ahead of him in the countdown to the NHL Draft.

While he showcases a great deal of respect for his opponents and seeks opportunities to learn from them when he can, Guhle is just as defensive of his positioning as he is when taking to the ice at the Art Hauser Centre and other WHL arenas.

“You’ve got to always be hungry, because when you’re hungry to get better or for goals like the draft or something like that, it makes it a lot more fun too when you’re working hard and putting in the work every day,” said Guhle.

For now, Guhle stays prepared. While he expected to be still playing hockey at this point in March, he’s taking the current events in stride as he keeps his body and mind in the right place.

“I’m trying to do a little body-weight stuff to try and stay in shape,” said Guhle. “It’s something that’s bigger than hockey so nothing you can really do about it, but I’m just doing little things trying to stay in shape, trying to keep your mind moving.

For Guhle, time is an advantage in the mind of a motivated person. He’s prepared, focused, and ready for when that next challenge comes his way.