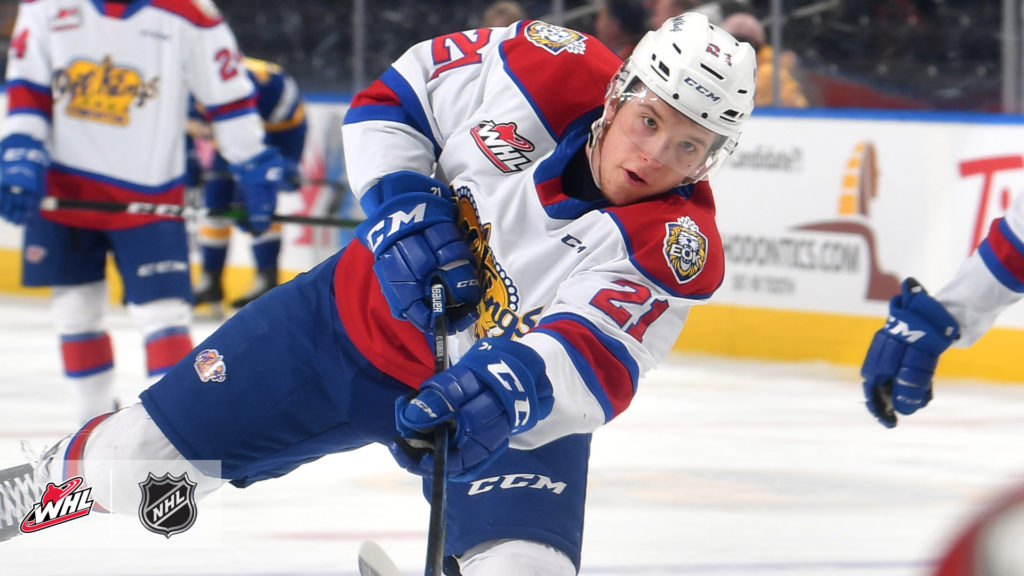 When Jake Neighbours is on the ice, opposition in the Western Hockey League know to take note.

Sometimes he’s changing momentum in the play via a timely hit or winning a critical battle in the corner. Other times, he’s challenging WHL goaltenders with his skillful shot from an Ovechkin-esque area.

Now high on the charts for the 2020 National Hockey League Draft, those outside the WHL who haven’t already are placing Neighbours on their ‘can’t-miss’ list as well.

“For the me, the biggest thing in the way I play the game is team success leads to individual success,” Neighbours said. “With our run last year, we came into the year with a little bit more experience and knowing that we were going to be a bit more of a threat around the league.

“The biggest thing was to just contribute as much as I could to a team game and it would lead to individual success. That’s been my game plan so far and it’s been working out.”

Of the seven Albertan players to be taken in the top 10 of the 2017 WHL Bantam Draft, Neighbours was the third one chosen when the Oil Kings called his name with the fourth-overall selection.

A product of Airdrie, Alta., he’s since flourished with the Calgary Midget AAA Buffaloes of the Alberta Midget AAA Hockey League and enhanced those skills with the Oil Kings. He’s part of a handful of draft-eligible talents to rank inside the top 20 in WHL scoring, which is no small feat in itself. However, the way he’s gotten there, using his 5-foot-11, 196-pound frame to keep opponents aware of his presence, has helped bring him and his team more success.

Those skills continued to translate earlier this month at the 2020 Kubota CHL/NHL Top Prospects Game, playing a key role on Team Red.

“He had some great opportunities to capitalize, but I thought he was able to play against those guys at that level.”

His appearance at the annual showcase of the Canadian Hockey League’s top draft-eligible talent coincided with the unveiling of the NHL’s Central Scouting Service announcing their midterm rankings, with Neighbours listed 30th among North American skaters. In the crystal ball that is mock draft and list rankings, some analysts have him higher among the overall lists.

It’s for that reason and then some that Neighbours remains focused on what he can control.

“If you let your mind get sidetracked on too many things, like rankings and the draft and things like that, it’s going to take away from your game,” Neighbours said. “I think the most important thing is focusing at the task at hand, taking it one game at a time.

“One game is not going to make you a top-five draft pick.”

That game-by-game approach and commitment to team success has led to career growth this season. He’s already more than doubled the production from his rookie season, posting 53 points (16G-37A) through 50 games compared to 24 points (11G-13A) through 47 games last season.

Neighbours has found that perfect balance between playing with an edge to be among the top players offensively while not playing with too much of an edge that he’s in the box too frequently either. Of the top 25 scorers in the WHL, 14 have fewer than 30 penalty minutes this season, including the self-described power forward.

“He’s able to play the hard areas; he’s a big kid,” Lauer said. “He’s got good skill, but he’s that type of guy that enjoys going to the hard areas.

“He’s strong on pucks. I think we just found a lot more consistency in his game when he plays that type that way.”

Additionally, so too have the Oil Kings risen in the past two seasons. Now enjoying a healthy 11-point lead in the conference and division, the success of the pair goes hand-in-hand.

With their eyes on another lengthy playoff run this spring and the NHL Draft, Neighbours and company are eager to see what the coming months bring for the team and for him.