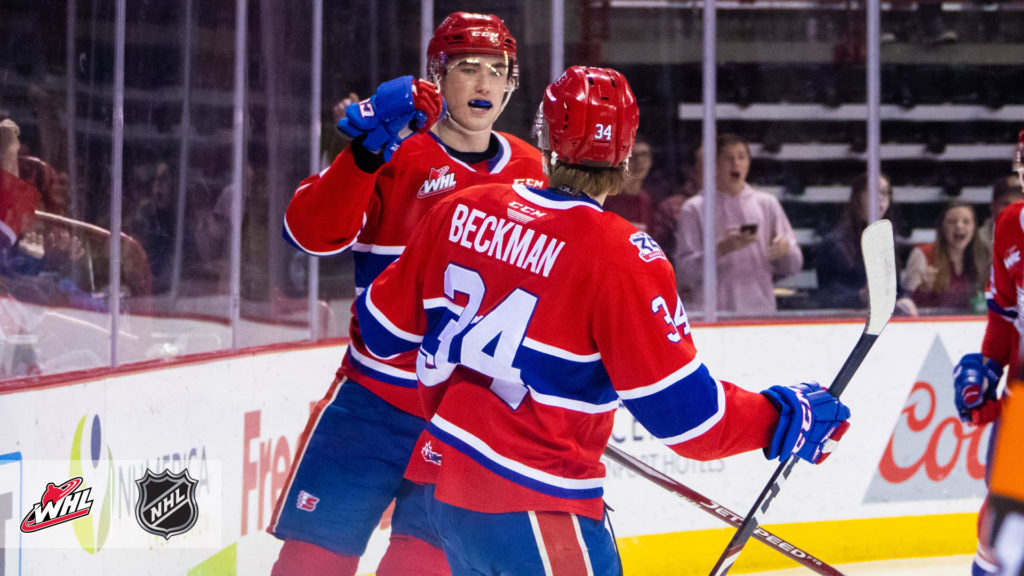 Whether you’re a player, official, coach, staff member, member of the media or fan, everyone has a unique ‘welcome to the Western Hockey League’ moment that signifies how great of a league it truly is and sets forth a certain spark of inspiration.

For Spokane Chiefs forward Jack Finley, that moment came in the fall of 2017 as he attended his first training camp with the WHL Club. At the time, Finley was able to rub shoulders with the likes of Kailer Yamamoto, Ty Smith, Jaret Anderson-Dolan, and Adam Beckman among many other talented players.

Just their presence set forth a strong example of what it took to lead and succeed.

“Just to think these guys were in my shoes when they were my age and they did all the right stuff to get them where they are today,” Finley said, appreciative of the friendships he was able to build at the time. “It’s pretty cool.”

Since that moment, Finley has taken the right steps as well and more than filled the shoes of those expectations that come with it. He’s subsequently played a growing role in the Chiefs’ offensive attack while minding his defensive game and keeping an eye on the 2020 NHL Draft.

When the times comes for him to experience the gauntlet of interviews, press conferences and attention galore that come with the NHL Draft, he’ll be well prepared. His father Jeff played for the Portland Winterhawks in the 1980s before going on to play 708 NHL regular season games, followed by more than a decade of scouting with the Detroit Red Wings and Winnipeg Jets.

“He’s definitely helped a lot,” Finley said. “Growing up, the draft is a big part of his job.

“Just following him around, it’s been a big part of my life and something that I’ve always looked up towards. This year, we were talking a little bit about it at the start of the year, he said to just treat it as a normal year and use it as motivation to move up in the draft.”

The pipeline of Finley family talent continues after Jack with his brother Mason, a fifth-round selection of the Calgary Hitmen at the 2019 WHL Bantam Draft.

A determined and motivated Finley thrived offensively for the Chiefs this season with 57 points (19G-38A) in 61 games. With Finley joining the ranks of the team’s offensive threats, head coach Manny Viveiros said it was important for the group of them to grasp their defensive responsibilities to emerge as great players rather than just good players.

“Those guys understood if they were going to play, and they’re going to be successful offensively and if our team was going to have success, they had to be able to play a 200-foot game better than anybody,” Viveiros said.

Viveiros has been familiar with the Finley family for decades, battling in the 1980s against Jeff when Viveiros played for the Prince Albert Raiders. As Jack prepared for the biggest year yet in his hockey career, Viveiros was impressed by what the 17-year-old put forth.

“Being a professional hockey player is his number one goal,” Viveiros said. “That really impressed me with how focused, determined and goal oriented this young man is.”

Using his 6-foot-5, 205-pound frame, Finley is still growing into his body but prides himself on his physical play. When combined with his skill, it makes for a winning combination.

“His legs are catching up to him,” Viveiros added. “They’re getting stronger and quicker and I thought before the season was cancelled how much he improved in his quickness and how quick he got around the rink.

“I’m starting to fill into my frame, and I think now that I’m getting stronger, my growing started to stop,” Finley said. “Now it’s going to become even better to use and I think that’s just how I want to play.”

Part of that motivation comes through past experiences like the 2017 WHL Cup, which came shortly after his ‘welcome to the WHL’ moment.

Playing and winning with other highly-rated NHL Draft talent like Justin Sourdif and Dylan Garand at the time, he welcomes each challenge against each player in his age group. Whether it be in the WHL or at an event like the 2020 Kubota CHL/NHL Top Prospects Game, Finley will be ready.

“That age is where things start to get serious,” Finley said of the WHL Cup. “When I play those guys in the regular season, obviously we’re friends but we battle hard.

“It’s cool to see at a young age guys that have improved so much. It’s good fun to play against those guys.”

Make no mistake though, Finley has the mindset of wanting to be the best each time he hits the ice.

“Before a game, I know who I’m playing against and make sure to battle them hard,” Finley said. “Even if it’s someone that isn’t my age and is already drafted, it’s another good player. I want to show that I can play against the best.”

As for Viveiros, even though he’s only coached him for a year, he already knows how special the Kelowna, B.C. product is. For the team that does call his name, he offered up a simple scouting report.

“They’re going to get an NHL player for sure.”