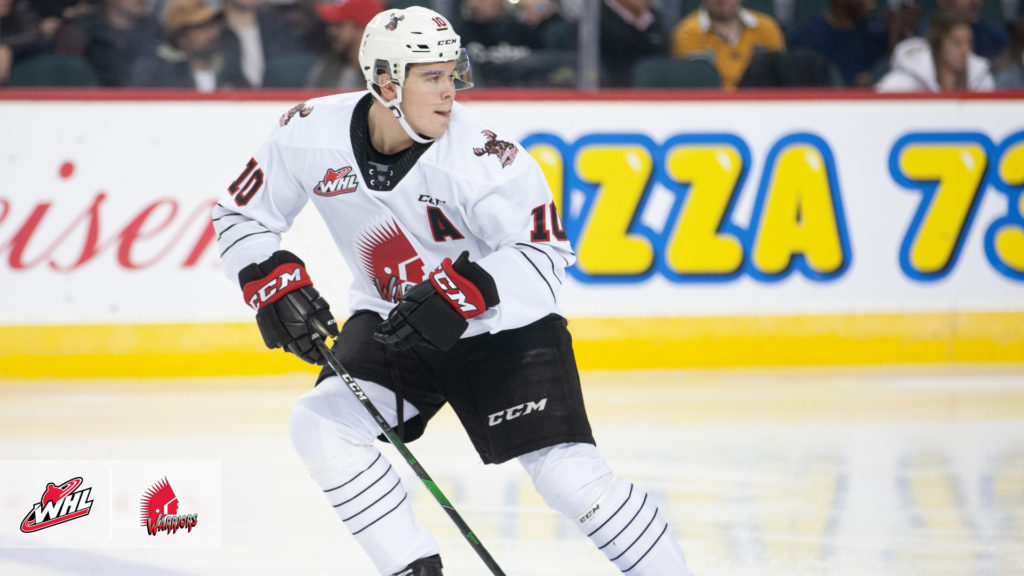 At the upcoming NHL Draft, a Moose Jaw Warriors defenceman born in Manitoba will be among the top talent available for selection.

Stop us if you’ve heard this story before.

That story may play like a broken record, but there’s no denying the impressive precedent the Warriors have established for preparing talent for the next level. First it was Roblin’s Josh Brook in 2017, then Winnipeg’s Jett Woo in 2018. Now, it’s Brandon’s Daemon Hunt.

While Hunt is eager to earn his own way up the draft rankings, the benefit of mentorship from Brook and Woo is something he doesn’t shy away from either.

“I got to work with Brook and Woo and they really mentored me really well,” Hunt said. “I really took it in and now I’m teaching some of the younger guys on my team.

“I’m passing on that experience and I really took it as something to get better. I’m really grateful for that.”

A nine-game audition with the Warriors in the 2017-18 WHL Regular Season saw Hunt learn to adjust to the WHL’s level of play in the right way. In an increased role during a full 2018-19 campaign, Hunt finished fourth among rookie defencemen in scoring with 20 points (7G-13A). He also gained more from his time with the two defensive leaders and the organization’s first-class approach to development.

“The atmosphere and the way the Warriors do everything, they’re unbelievable here,” Hunt said. “They give me video at the end of a game, and they give me as much feedback to get better. They work on areas of my game to get me better.”

With the off-season departures of both Brook and Woo, Hunt is now the go-to guy and he doesn’t mind the extra attention. If anything, it gives him more of a chance to show scouts and opposition who he really is.

“I enjoy leading and showing the ropes to the younger guys,” Hunt added.

A standout defenceman at the Bantam AAA and Midget AAA levels in Manitoba, Hunt has noticed improvements in his skating and shot, but doesn’t think his game has changed significantly from where it was a few years ago. It’s more so that maturing into his 6-foot-0, 194-pound frame has been what’s opened doors for him at the WHL level.

“I think my strengths and speed and everything like that has just gone way up. Year-by-year, I’ve just gotten that much bigger and stronger.”

Hunt’s connection with the Warriors is one of two strong ties to the hockey world. The other comes about five hours east in Hunt’s hometown of Brandon, Manitoba. A hotbed of hockey talent throughout North America’s professional and junior ranks, Hunt’s summer ice experience with those players has aided his development as well.

“We push each other, and everyone wants to get better there,” Hunt said.

Those summer skates are also a chance to reconnect with family. Colorado Avalanche forward Matt Calvert, a cousin of Hunt, is one of the many players the 17-year-old looks up to. For his position, Hunt looks up to another Brandonite for inspiration in Calen Addison.

“I’ve always looked up to Calen,” Hunt said. “He’s a guy that, he’s two-years older than me, he’s done everything that I really wanted to.

“I’d really like to follow in his footsteps, playing in the Hlinka Gretzky Cup and then him getting drafted into the NHL. Those are my goals as well.”

Like Addison, Hunt has caught the eye of Hockey Canada, playing at the 2018 World Under-17 Hockey Challenge, the 2019 IIHF Under-18 World Championship, and the 2019 Hlinka Gretzky Cup. Hunt said he’s relished the chance to take on international competition, giving him a better chance to witness and ingest the talent level in his age group around the world.

Whether he’s in Brandon in the summer, Moose Jaw in the winter, or over in Europe during the spring, Hunt comes fully prepared each time he steps on the ice.

“Knowing my work is starting to take off a bit and then getting recognized, it’s a very nice feeling. I just have to keep working hard and going day-by-day.”