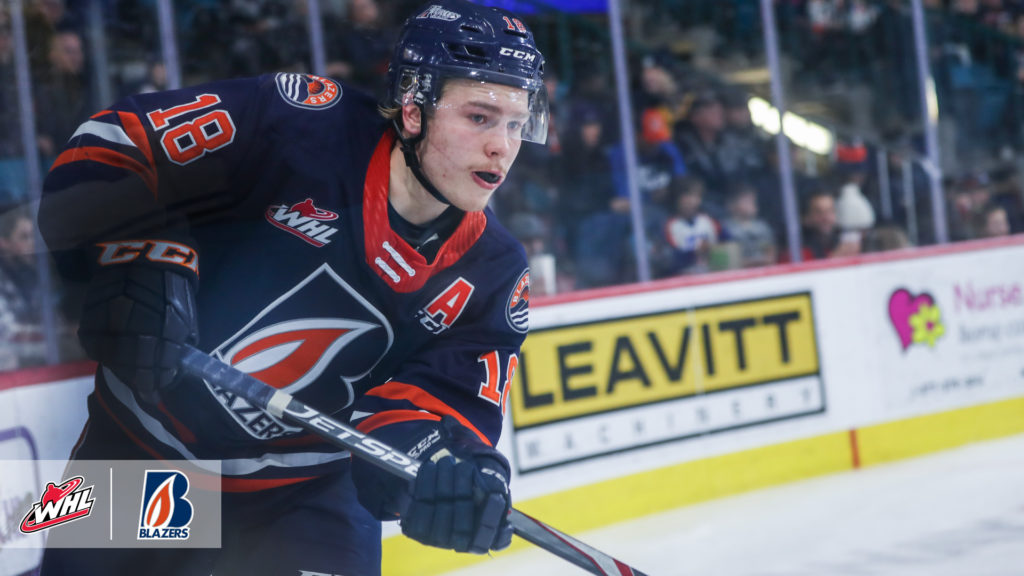 When Kamloops Blazers forward Connor Zary sets his mind to a task, there aren’t many people in the Western Hockey League who will be able to stop him.

Since entering the league, Zary has consistently raised his game to put himself among the best players on the ice each night. It wasn’t an overnight process, but one that took time to condition for the former Saskatoon Contact.

Zary did it all with the mindset of getting himself on the radar for the National Hockey League Draft, an event he coveted growing up. That dedication to the game has paid off in spades for Zary, who now finds himself an invaluable part of a strong Blazers team and as can’t-miss prospect for the 2020 NHL Draft.

“It’s been a good season so far,” Zary said of his progress individually and as a whole. “In Kamloops we’ve had a pretty good run so far being close to the top in the [Western Conference] so it’s been really good.

“There was a lot more pressure coming into the year. I’m just having a lot of fun.”

A solid performer down the stretch in the 2018-19 WHL Regular Season, Zary ranked in a tie for 12th in league scoring from January 1, 2019 through to the start of the 2019 WHL Playoffs. Posting 42 points (16G-26A) of his career-high 68 last season tied him alongside the WHL’s eventual leading scorer from that season while also keeping him ahead of or just slightly behind several of the top WHL players selected at the 2019 NHL Draft.

Zary would’ve been there too had it not been for the calendar, marking his 18th birthday 10 days after the NHL’s imposed cut-off date of September 15. Still, the Saskatoon, Sask. product has shown he’s as good and ready to take on offensive responsibilities as those top players. As part of one of the WHL’s top lines, which also features captain Zane Franklin and 19-year-old forward Orrin Centazzo, the trio each rank inside the top six in WHL scoring.

In such an important year, Zary credited the familiarity of playing with the other two in helping him be where he is.

“Those guys are really good players and when you surround yourself with good players, it’s just going to make yourself better no matter whether it’s in practice battling against those guys or in games,” Zary said. “We found a lot of chemistry at the start of the year, so it’s really been going good and it takes a lot of pressure off me being in my draft year to have guys around me supporting me.”

A key member of the power play and the penalty kill, Zary’s insatiable appetite for the puck has made him a key offensive leader in all three areas of the ice.

With that success has come the opening of doors for the 6-foot-0, 180-pound forward who became one of the few draft-eligible players to appear in the 2019 CIBC Canada Russia Series. He also earned a brief invite to compete with Canada’s National Junior Team at their selection camp ahead of the 2020 IIHF World Junior Championship. Most recently, he  earned a spot on the roster for the 2020 Kubota CHL/NHL Top Prospects Game.

It’s one thing to simply be there and another to standout as Zary intends to do.

“I thought I put myself in a good position to get chosen for that,” Zary said, discussing the forthcoming showcase of the best draft-eligible players in the CHL on January 16 in Hamilton, Ont. “With all the success our team has had in Kamloops so far, it’s really helped me get there. I just want to prove to myself that I belong.

“I obviously want to be a first-round pick in June in the draft so going there and having a strong performance can help with that.”

Zary’s impact can be felt throughout the room as well according to head coach Shaun Clouston, who has been impressed early on with what the young forward brings to the table.

“During the summer when I got the job, I talked to everybody on the team and asked who the leaders were, who were players that were looked up to and could lead us in the right direction,” Clouston said. “He was definitely a guy that came up in the vast majority of the conversations.”

Having gone through the draft process himself back in 1986, Clouston said there wasn’t much to offer in the way of advice, but rather ensuring that he was bringing out the best Zary had to offer on a consistent basis.

“If they’re the best that they can be, it’s going to work out the way it’s supposed to,” Clouston said. “It’s just kind of a daily process. It’s making sure all of our guys have good habits off the ice, good habits on the ice. He’s not a guy that needs a lot of pushing.

“There’s not a lot of correction or a lot of advice, it’s just reinforcement.”

As much as Zary has already shown and will work to convince NHL teams that he’s worthy of a first-round selection in June’s draft between now and the end of the season, a lot is left up to chance. Taken in the second round, 37th overall, of the 2016 WHL Bantam Draft, Zary understands that the event is a bit of a fleeting moment. It’s a chance to celebrate with family, friends, and new fans, but that his work doesn’t end when his name is called.

“There’s a lot of work to go,” Zary acknowledged. “I think it’ll be pretty special wherever I happen to go.

“No matter what, I’ll be excited; it’ll be a pretty cool moment.