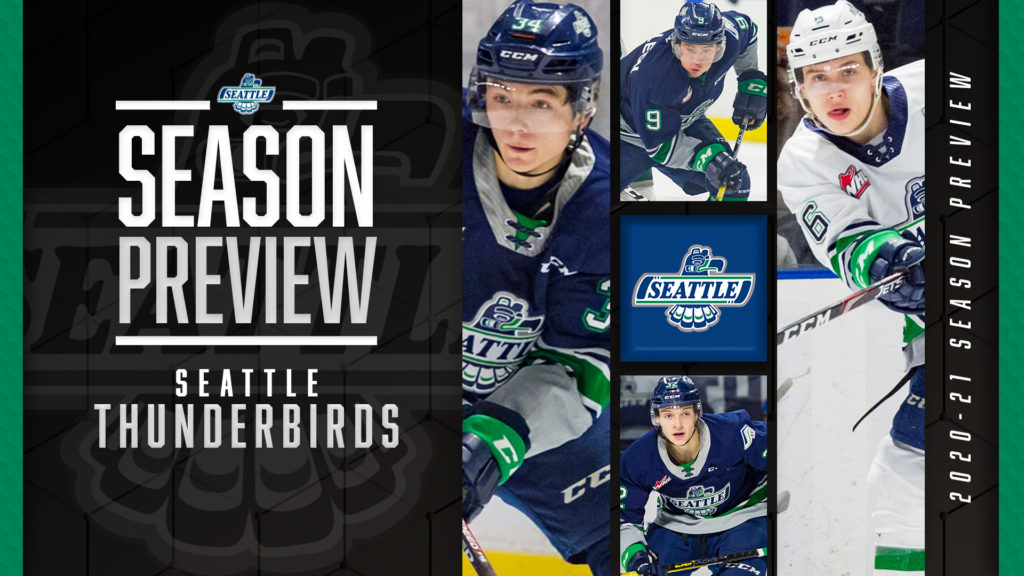 Overview: Elite development is the name of the game in Seattle and the Thunderbirds are well on their way to carrying that trademark forward in 2020-21.

Having seen numerous players selected in the past two NHL Drafts, including Henrik Rybinski (Florida Panthers, 2019), Matthew Rempe (New York Rangers, 2020), and Tyrel Bauer (Winnipeg Jets, 2020), plus the now-departed Roddy Ross (Philadelphia Flyers, 2019) who was traded to the Regina Pats this offseason, the Thunderbirds recent track record of advancing players is solid.

The expectation is that will continue in 2021 with three more players currently ranked by NHL Central Scouting for the 2021 NHL Draft, including Conner Roulette who is expected to go in the first round, as well as Lucas Ciona and Kai Uchacz also listed.

With only one 20-year-old on the roster in Keltie Jeri-Leon, there’s ample opportunity for the youth to take over throughout the lineup.

Key Players: Roulette is the key up front. The 17-year-old product of Winnipeg, Man., registered 19 goals in his rookie season and is expected to take a big step forward in 2020-21.

The 6-foot-8, 240-pound frame of Matthew Rempe will also play a big role, literally, for the Thunderbirds this season. After being selected by the Rangers in the fifth-round (165th overall), the product of Calgary, Alta., will aim to improve up his rate of production, having collected 31 points (12G-19A) in 47 games last season.

On the blueline, Tyrel Bauer is the leading, having been named captain of the Thunderbirds this past week. The native of Cochrane, Alta., brings an old-school, hard-nosed approach to the game, something that was coveted by the Winnipeg Jets when they selected him in the sixth round (164th overall). A bruising 6-foot-3, 208-pound specimen, Bauer can also chip in on offense, having contributed 17 points (3G-14A) in 60 games last season.

A new name to watch for is the addition of 2019 first-round pick Kevin Korchinski. Selected 10th overall in 2019, the product of Saskatoon, Sask., the 16-year-old rearguard will inject a new presence on the T-Birds blueline.

With Roddy Ross in Regina, the cage duties are up for grabs with a couple rookies in contention. Coquitlam product Thomas Milic has two WHL appearances under his belt, while Jackson Berry of Chestermere, Alta., brings six games of WHL experience. Berry joins the Thunderbirds after spending part of 2019-20 with the Moose Jaw Warriors.

Tidbits: The Thunderbirds named Tyrel Bauer the 39th captain in franchise history earlier this week, and he will be joined by alternate captains Keltie Jeri-Leon, Henrik Rybinski, and Matthew Rempe.