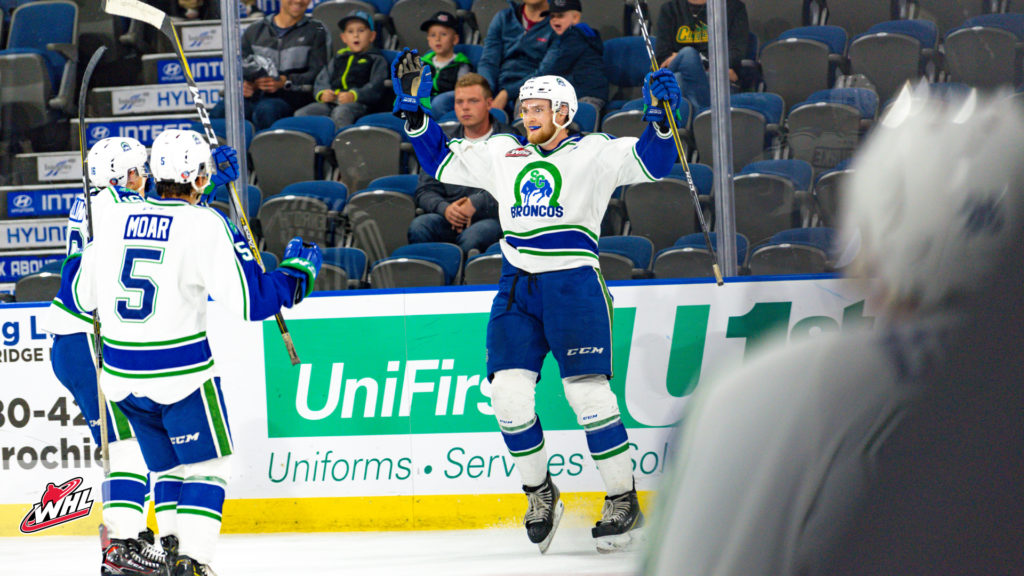 The final 15 games of the 2019 Western Hockey League Pre-season are in the books and the start of the 2019-20 WHL Regular Season is now only days away.

Sunday’s 6-2 victory for the Calgary Hitmen against the Red Deer Rebels was the lone action of the day.

The Hitmen didn’t waste any time in the game either, scoring four times in the first period en route to the victory. Riley Fiddler-Schultz scored the third goal of that first period, adding another in the second for the two-goal performance. Jack McNaughton stopped 10 of 12 shots in 40 minutes of action to earn the victory, while Ethan Hein holding the fort in the third period.

Sunday’s win was the Hitmen’s second in as many days against a Central Division opponent. Saturday in Taber, Alta., Josh Prokop and Jackson van de Leest scored in a 2-1 victory against the Medicine Hat Tigers. Elijah Brown had the lone goal for the Tabbies in the defeat.

Before Saturday’s loss, the Tigers scored a victory of their own in a 5-3 decision against the Rebels Friday. Ryan Chyzowski had a pair of goals and three points while Dru Krebs, Bryan Lockner, and Eric Van Impe each had a pair of assists. Cole Clayton scored the game-winning goal for the Tigers in the road win.

Friday, the Rebels received goals from Arshdeep Bains, Zak Smith, and Josh Tarzwell. Sunday, Jayden Grubbe and Jace Isley each picked up their first goal of the pre-season in the loss.

Staying in the Central Division, the Swift Current Broncos completed a home-and-home sweep of the Lethbridge Hurricanes, moving their pre-season record to 5-0-0-1. Friday in southern Alberta, Ethan O’Rourke scored 2:07 into overtime to lift the Broncos to a 4-3 win. Dino Kambeitz had a pair of goals for the Hurricanes, including the one that tied up the game in the third to prolong the contest.

With the scenery switching to Saskatchewan Saturday, Carter Chorney’s second goal of the weekend proved to be the difference as the Broncos earned a 2-1 win at home. Joona Kiviniemi also scored for Swift Current while Noah Boyko responded for the Hurricanes.

The Broncos had their goaltenders to thank for both wins as well. Friday, Jordan Fairlie stopped 38 of 41 shots. Saturday, Isaac Poulter stopped 37 of 38 shots for the win.

The six teams in the WHL’s East Division paired off for two-game sets this weekend, with the Prince Albert Raiders and Saskatoon Blades each coming away with a pair of victories.

In a home-and-home with the Regina Pats, the Raiders won 3-2 in a shootout Friday in the provincial capital before earning a 5-2 victory at the Art Hauser Centre Saturday.

Ozzy Wiesblatt contributed both goals in regulation Friday for the defending WHL Champions while import forward Ilya Usau had the lone goal of the shootout. Ty Kolle and Austin Pratt scored for the Pats in the loss.

In northern Saskatchewan a night later, no shootout was needed as three third-period goals helped the Raiders push ahead to the victory. Usau and Wiesblatt scored in the first and second respectively while Makai Mitchell and Robbie Holmes answered for the Pats. Just 2:44 into the third, Max Martin broke the 2-2 deadlock and Montreal Canadiens prospect Cole Fonstad added two more goals to close out the game.

Down the road, the Saskatoon Blades hosted the Winnipeg ICE for a pair of contests, with the Blades earning the victory both nights.

Friday, the Blades bolted out of the gate, then hung on for the 4-3 victory. Colton Dach scored twice while Scott Walford added a goal and an assist. Brandon Lisowsky had the other goal for the Blades. Cole Muir, Jakin Smallwood, and Reece Harsch responded for the ICE.

Saturday, Saskatoon’s offence continued to roll to the tune of a 6-2 victory. Cyle McNabb had a pair of goals while Riley McKay and Parker Malchuk each had a goal and an assist in the win. Nolan Kneen and Randen Schmidt also scored for the Blades. Smallwood’s second goal of the weekend and a strike from Connor McClennon accounted for Winnipeg’s offence.

Home-ice advantage was not in effect for a weekend clash between the Brandon Wheat Kings and Moose Jaw Warriors.

At Mosaic Place Friday, the Wheat Kings rolled to a 5-2 win. A night later at Westoba Place, the Warriors emerged on the favourable side of a 2-1 decision.

Ridly Greig impressed in Friday’s contest with a pair of goals and four points. Jake Chiasson had a goal and an assist while Braden Schneider and Lynden McCallum also scored. Cade Hayes and Tate Popple scored for the Warriors.

Saturday in Brandon, Eric Alarie and Hayes scored for the Warriors while McCallum had the lone Brandon goal in the loss.

The Edmonton Oil Kings and Prince George Cougars closed out their pre-season with the second of two dates in Fort St. John, B.C., resulting in a 2-1 overtime win for the Oil Kings.

Riley Sawchuk scored in the first, but the Cougars would respond with a goal from Jackson Leppard to even up the game after 40 minutes. With the action spilling into overtime, Jake Neighbours played the role of hero with his third goal of the pre-season.

For the second time in as many weeks, the Spokane Chiefs returned to Kennewick to battle the Tri-City Americans, emerging with a 3-1 victory this time around. Nikita Krivokrasov had the only goal of the first to put the Americans ahead, but the Chiefs responded with three unanswered goals in the second period as Noah King, Bear Hughes, and Erik Atchison all found the back of the net.

After meeting at the start of the month, the Kamloops Blazers and Kelowna Rockets met twice more over the weekend with the Blazers picking up both wins.

Saturday’s rematch at Prospera Place in Kelowna saw both teams endure a nine-round marathon that was ended by finally put to bed by Brodi Stuart.

The Blazers jumped ahead with goals by Stankoven and Orrin Centazzo, but the Rockets rallied with goals from Kyle Crosbie and Pavel Novak to tie things up after 40 minutes. After a scoreless third and overtime, Stankoven and Kyle Topping were the only two players to score in the shootout before Stuart ended things after 18 skaters.

With all 60 games in the 2019 WHL Pre-season now complete, teams will set their final rosters in preparation for the start of the 2019-20 WHL Regular Season on Friday, September 20.