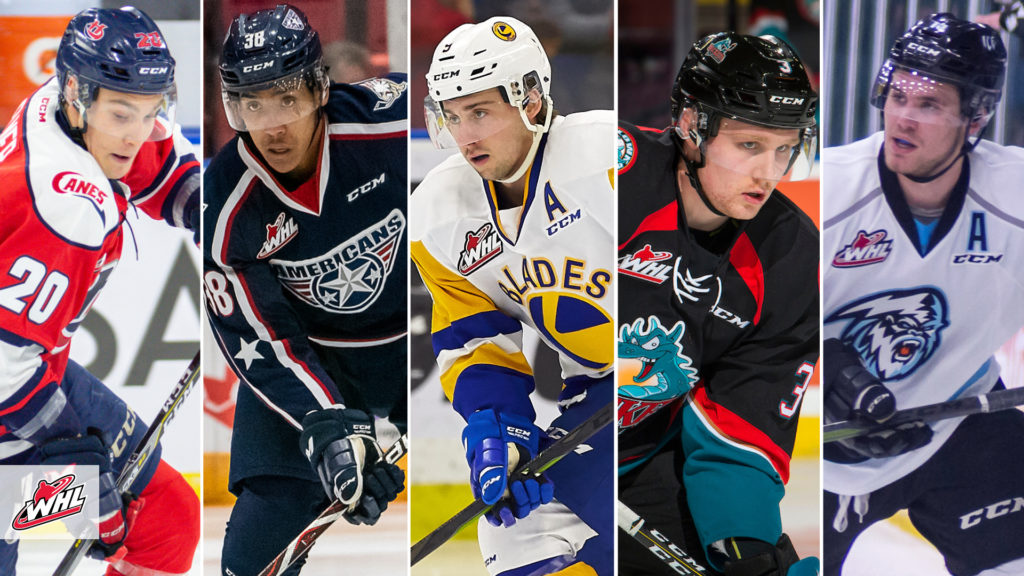 Through July and August, the Western Hockey League is saying ‘thank you’ to its 2019 graduating class. From July 15 to 19, we extended our gratitude to 10 players who concluded their WHL careers in the 2018-19 season.

Jake Elmer was selected in the sixth round, 116th overall, by the Regina Pats at the 2013 WHL Bantam Draft and would go on to play for the Pats, Kootenay ICE and Lethbridge Hurricanes. In his 227 regular season and playoffs games, Elmer amassed a total of 153 points (69G-84A). To continue his career, Elmer signed with the NHL’s New York Rangers.

WHL Champion Aaron Hyman began his career with the Calgary Hitmen after he was selected by the team in the 2013 WHL Bantam Draft in the third round, 49th overall. After three seasons in Calgary, Hyman joined the Seattle Thunderbirds where he would go on to win a WHL Championship in 2017. Following his championship, Hyman played for the Pats and finished his WHL career with the Tri-City Americans. In 270 regular season and playoff games, Hyman recorded 95 points (18G-77A). To continue his hockey career, Hyman has committed to Ryerson University to play with the Rams hockey team.

The Saskatoon Blades alternate captain, Max Gerlach, was originally selected in the sixth round, 120th overall, by the Medicine Hat Tigers. After he was acquired by the Blades, Gerlach would go on to collected 269 points (152G-117A) in 298 regular season and playoff games.

Although Dalton Gally was selected by Calgary in the sixth round, 128th overall, in the 2013 WHL Bantam Draft, he began his career in Medicine Hat. After two seasons with the Tigers, the defenceman headed to the Okanagan to play with the Kelowna Rockets where he concluded his WHL career with 34 points (3G-31A) in 200 regular season and playoff games.

After he was selected in the second round, 63rd overall, in the Canadian Hockey League Import Draft, Martin Bodak, moved from Spisska Nova Ves, Slovakia to play with the ICE in Cranbrook, B.C. During his two years in Kootenay, Bodak collected 56 (18G-38A) in 117 regular season and playoff games. 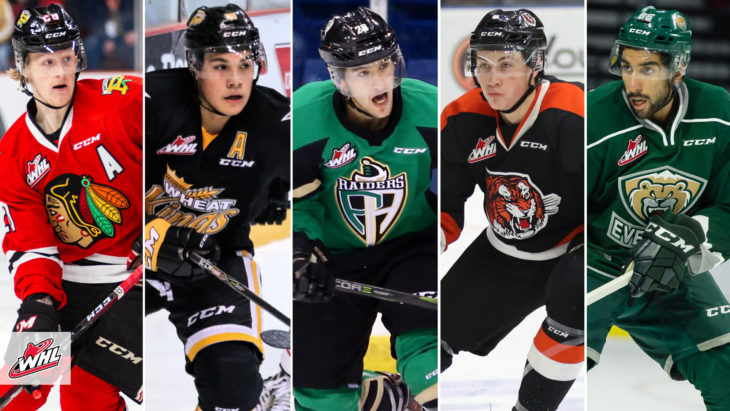 The 2018-19 WHL Player of the Year and Top Scorer, Joachim Blichfeld, registered career-high totals in his overage season including 114 points (53G-61A). In total, the signed, San Jose Sharks prospect recorded 251 points (115G-136A) in 215 regular season and playoff games with the Portland Winterhawks.

WHL Champion and alternate captain of the Brandon Wheat Kings, Linden McCorrister, began his WHL career when he was selected by the Manitoban team in the 2013 WHL Bantam Draft in the seventh round, 135th overall. Over his 210 regular season and playoff games, McCorrister recorded 102 points (44G-58A) with the Wheat Kings.

Congrats to @lindenm12 on an awesome WHL career! McCorrister played in 210 regular season & playoff games. Wishing you all the best! #WHLAlumni 🏒🎓 pic.twitter.com/KEQBVHTWUx

Kody McDonald began his WHL career when he was selected by the Prince George Cougars in the second round, 24th overall and would then go on to play for the Prince Albert Raiders and Victoria Royals. Throughout his time in the WHL, McDonald amassed a record of 210 points (101G- 109A) in an astounding 349 regular season and playoff games. As for the future of his career, McDonald has committed to the University of Carlton to play with the Ravens and utilize his WHL Scholarship.

Another single-team WHL player can be found in the career of Dylan MacPherson, who played in Medicine Hat from 2015 to 2019. In his 199 regular season and playoff games with the Tigers, the defenceman tallied 49 points (6G-43A). To continue his hockey career, MacPherson has joined the AHL’s Springfield Thunderbirds.

Sahvan Khaira, a 2018 WHL Champion with the Swift Current Broncos, finished his WHL career with the Everett Silvertips after also playing for the Thunderbirds. In his incredible 362 regular season and playoff games, Khaira collected 92 points (14G-78A).

Thank you to our graduating players for all your contributions on and off the ice. Visit @TheWHL on Twitter from Monday through Friday for new player cards. Weekly recaps of player cards and highlights will appear at WHL.ca each Friday.