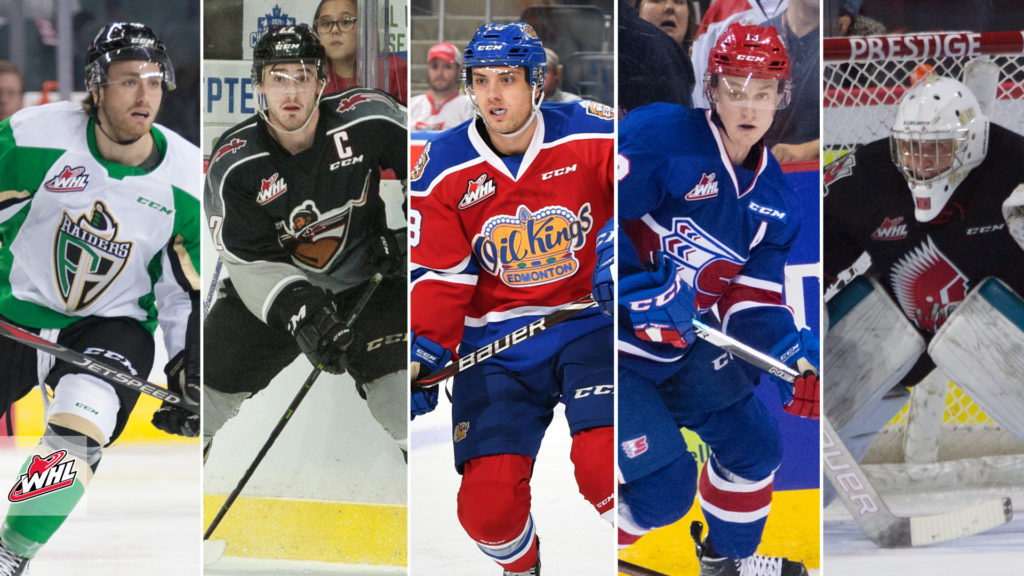 Through the months of July and August, the Western Hockey League is saying ‘thank you’ to its 2019 graduating class. From July 8 to 12, we extended our gratitude to 10 players who concluded their WHL careers in the 2018-19 season.

Prince Albert Raiders forward and 2019 WHL Champion Noah Gregor was drafted in the third round, 55th overall, in the 2013 WHL Bantam Draft by the Victoria Royals but began his career with the Moose Jaw Warriors in the 2014-15 WHL Regular Season. During his time with the Warriors, Gregor amassed 176 points (71G-105A) and also earned the position of alternate captain. In the 2017-18 season, Gregor was acquired by the Royals where his continued success saw him drafted and eventually signed by the San Jose Sharks. This season, Gregor was instrumental in the Raiders’ playoff run to the 2019 Rogers WHL Championship Series, collecting 24 points (13G-11A) in 23 games including two goals in the final game against the Vancouver Giants.

Congrats to @n_gregs20 on an amazing WHL career! His 308 games in the WHL concluded w/ a WHL Championship in May! Best of luck w/ @SanJoseSharks! #WHLAlumni 🏒🎓 pic.twitter.com/Iruyab9aY6

As the captain of the Giants, Jared Dmytriw lead his team to success this year, winning both the B.C. Division title and the Western Conference Championship. During Vancouver’s playoff run, he collected 21 points (9G-12A) in 22 games and showed strong leadership qualities both on and off the ice.

Dmytriw also played with the Red Deer Rebels and Royals as the Island team was his original WHL Bantam Draft team back in 2013 where he was selected in the fourth round, 83rd overall.

Originally drafted in the second round, 31st overall, by the Kootenay ICE, Vince Loschiavo recorded 89 points (46G-43A) in Cranbrook, B.C. and earned an alternate captain position on the team. After a short stint in Moose Jaw, Loschiavo landed with the Edmonton Oil Kings where he finished his WHL regular season career with 174 points (95G-79A) in 318 games.

Splitting his WHL career between the Regina Pats and the Spokane Chiefs, Riley Woods totaled 180 points (75G-105A) in 230 regular season games. After setting a career-best record of 75 points (29G-46A) this season in Spokane, Woods signed an American Hockey League (AHL) contract with the Toronto Marlies and earned a spot on the WHL’s Western Conference Second All-Star team. 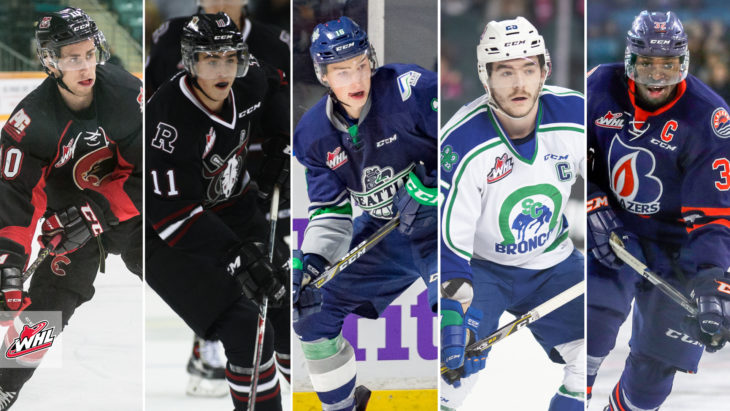 Prince George Cougars’ captain Josh Curtis spent his entire WHL career with the Cougars collecting a total of 97 points (31G-66A) in 222 regular season games. In the 2013 WHL Bantam Draft, Curtis was selected in the eighth round, 156th overall, and is continuing his hockey career in conjunction with his WHL Scholarship by committing to the Queen’s University Men’s Hockey Team.

After being selected 14th overall in the 2013 WHL Bantam Draft by Red Deer, Jeff de Wit, spent his WHL career in Regina, Kootenay and Victoria before rejoining the Rebels in the 2018-19 WHL Regular Season. During his career, de Wit recorded 115 points (57G-58A) in 313 regular season games and will look to continue his success at the University of Concordia with the Stingers.

Following in the footsteps of his older brother Luke Philp, Noah Philp committed to the University of Alberta after playing 270 regular season and playoff games between Kootenay and the Seattle Thunderbirds. Over his career, Noah collected 170 points (56G-114A) and again like his brother, played with the AHL’s Stockton Heat for a bit.

Although he didn’t begin his WHL career in Swift Current, Tanner Nagel’s name became permanently etched in the Broncos’ history after becoming a WHL Champion in 2018 with the team. This year, Nagel was also named captain and finished his career with 57 points (32G-25A) in 280 regular season and playoff games. Nagel will continue his hockey career with the ECHL’s Utah Grizzlies.

As the first-ever Jamaican-born player to be selected in an NHL Draft, Jermain Loewen’s impact on hockey in the WHL is something to remember. Loewen’s journey began when he was selected by the Kamloops Blazers in the third round, 48th overall, in the 2013 WHL Bantam Draft, and would continue in Kamloops for the duration of his WHL career. As captain of the Blazers, Loewen finished his career with 150 points (82G-68A) in 314 regular season and playoff games.

Thank you to our graduating players for all your contributions on and off the ice. Visit @TheWHL on Twitter from Monday through Friday for new player cards. Weekly recaps of player cards and highlights will appear at WHL.ca each Friday.