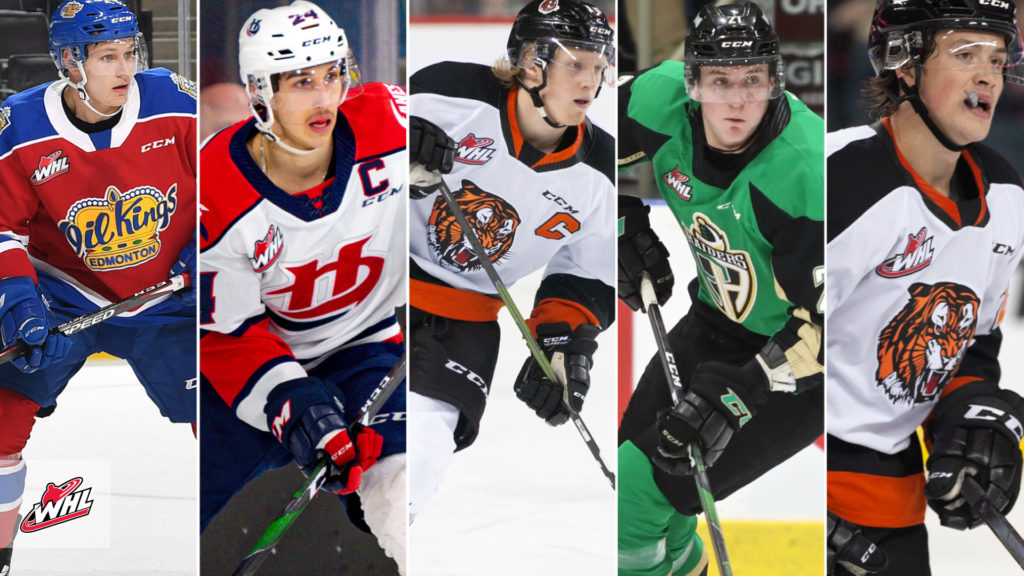 From start to finish, the 2019-20 Western Hockey League Regular Season provided plenty of standout performances both individually and as a team. Starting Friday, April 3, and featuring each Monday and Friday, we’ll reflect on key performers in statistical categories from the regular season that was. Welcome to the 2019-20 WHL Season Rewind. Today, we’re looking at the top scorers from the WHL’s Eastern Conference.

As one of the team’s three overage players and their captain, plenty was expected from James Hamblin with the Medicine Hat Tigers and the Edmonton, Alta. product more than delivered. Recording 92 points (36G-53A), Hamblin found the scoresheet in 49 of his 63 games this season. Setting career-high totals in all three major offensive categories, he became the first Tiger to surpass the 90-point plateau since former teammates Chad Butcher and Mason Shaw did so in the 2016-17 WHL Regular Season.

Originally the 17th-overall selection in the 2014 WHL Bantam Draft, Hamblin tallied 26 multi-point games throughout the season. Those performances included a five-assist game on December 10, 2019 in Saskatoon and a four-goal performance on January 18, 2020 at home. The five-point night marked a career-best single-game performance for Hamblin while his four-goal game was one of two hat tricks through the season. Hamblin concluded his WHL career with 284 points (115G-169A) in 324 WHL regular season games.

Now that's what we call a (Medicine) Hat trick! @tigershockey captain @HamblinJames10 scores thrice on the ice in Victoria Saturday to lead the winning effort. pic.twitter.com/c6QKUR83c9

Though he appeared in 17 fewer games than he did during the 2018-19 WHL Regular Season, Lethbridge Hurricanes co-captain and Buffalo Sabres prospect Dylan Cozens posted an incredible 85 points (38G-47A) through 51 games to mark career-high totals in both goals and points. Highlighted by 23 multi-point games were five four-point performances, including two of his three hat tricks on the season.

Chosen 19th overall by the Hurricanes at the 2016 WHL Bantam Draft, the Whitehorse, Yukon product was a force to be reckoned with after helping Canada win gold at the 2020 IIHF World Junior Championship. From January 17, 2020 to the conclusion of the regular season, Cozens was third in overall WHL scoring with 39 points (18G-21A) in 21 games, leading all Eastern Conference skaters in scoring. Cozens has now recorded 223 points (95G-128A) in 179 WHL regular season games.

After being selected in the third round, 91st overall, of the 2019 NHL Draft by the Washington Capitals, Aliaksei Protas was a man on a mission during the 2019-20 WHL Regular Season. Finishing with 80 points (31G-49A), the product of Vitebsk, Belarus helped power the Prince Albert Raiders to their second-straight East Division title. Highlighted by 27 multi-point performances, Protas led the Raiders in goals, assists, and points.

Of the 58 games Protas appeared in, he found the scoresheet in 41 of them. He had a pair of four-point efforts throughout the season and finished with six multi-goal games overall. Selected 26th overall by the Raiders in the 2018 Canadian Hockey League Import Draft, Protas has now recorded 120 points (42G-78A) in 119 WHL regular season games for his career.

Finding the scoresheet in 44 of his 62 games, Kemp tallied 19 multi-point games throughout the season. He registered a career-high five points (3G-2A) on December 11, 2019 in Prince Albert and later tallied a career-high four goals on February 28, 2020 against the Regina Pats. Formerly selected by the Everett Silvertips in the second round, 41st overall, of the 2015 WHL Bantam Draft, Kemp has recorded 187 points (84G-103A) in 232 WHL regular season games.

Have yourself a night @kemp_2000! The @tigershockey forward netted four goals in Regina Friday!

As far as strong performances from overage forwards go, Riley Sawchuk helped drive the Edmonton Oil Kings’ offence throughout the season. Recording 76 points (25G-51A) in 64 games, Sawchuk led the Oil Kings in scoring and finished 11th in overall WHL scoring. Sawchuk’s season was highlighted by finding the scoresheet in 46 games throughout the season and tallying 25 multi-point efforts.

Sawchuk’s season highlight came courtesy of a four-point performance on January 19, 2020 at home against the Tigers, where he tallied a natural hat trick and finished with four points in a 4-2 win. He added three other multi-goal games throughout the 2019-20 WHL Regular Season. Originally selected in the sixth round, 116th overall, by the Tri-City Americans at the 2014 WHL Bantam Draft, Sawchuk registered 160 points (62G-98A) in 259 WHL regular season games.