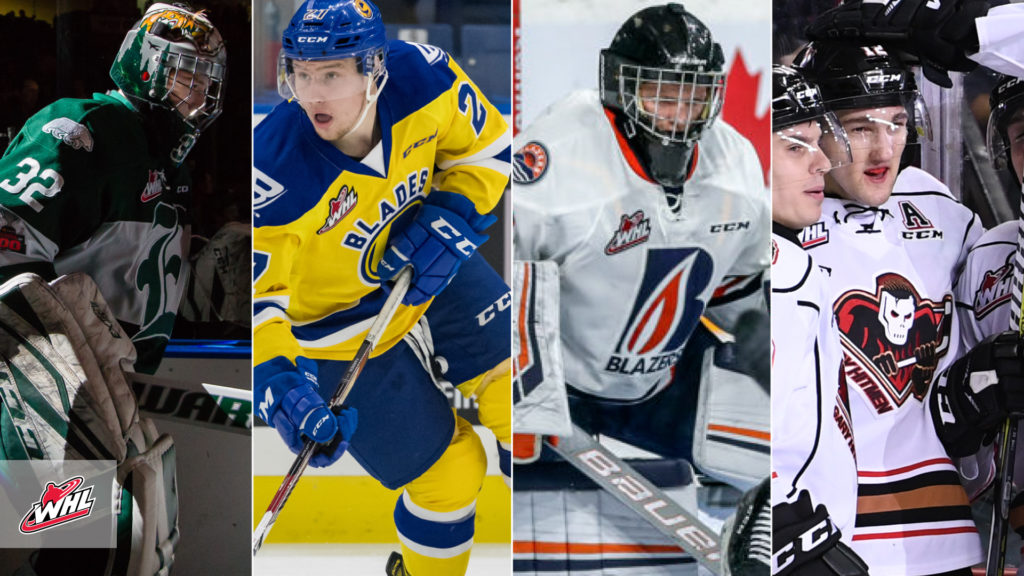 After 61 games, the dust has now settled on the 2018 Western Hockey League pre-season schedule. Fans won’t have to wait long for hockey to start up on a full-time basis again with the 2018-19 WHL Regular Season scheduled to begin Friday, September 21 with a slate of eight games followed by all 22 WHL teams in action Saturday, September 22.

As the standings, scoring charts and individual tallies reset for Friday’s startup, let’s take one more look back at who came out on top in the 2018 WHL Pre-season.

The Calgary Hitmen were the lone team to finish the pre-season with an undefeated record, going 6-0-0-0. All four Hitmen goaltenders picked up at least one win along the way, with both Carl Stankowski and Jack McNaughton earning a second victory. Stankowski topped all Hitmen goaltenders with a 1.51 goals-against-average and a 0.963 save percentage, allowing three goals on 81 shots in 120 minutes of action. Up front, Mark Kastelic led the team with nine points (3G-6A) in the six contests.

As the Hitmen scored 27 goals, so too did the Saskatoon Blades, who played one more game, finishing with a 6-1-0-0 record. Leading his team with nine points (3G-6A) as well was Michael Farren.

While both individual performances from Kastelic and Farren topped their respective teams, it was Victoria Royals forward D-Jay Jerome who topped all scorers in the 2018 WHL Pre-season, tallying 10 points (5G-5A) in five games.

Not to be outdone, Seattle Thunderbirds import forward Andrej Kukuca had an impressive start to his WHL career, posting nine points (4G-5A) in seven games with his new club. The 29th overall selection from the 2018 Canadian Hockey League Import Draft wasn’t the only import making noise as Nikita Sedov led the Regina Pats in pre-season scoring with seven points (2G-5A) through five games.

Sedov finished first among defencemen for scoring in pre-season play while Kootenay ICE defenceman Dallas Hines, T-Bird defender Simon Kubicek, and Spokane Chiefs rear guard Luke Gallagher each tallied five points. Of the trio, Hines had three goals while Kubicek had a pair and one of Gallagher’s five points came as a goal.

While the Hitmen and Blades each tallied 12 points in the standings, the Everett Silvertips and Chiefs weren’t far behind with nine points each in the standings. The Silvertips have goaltender Dustin Wolf to thank for that success as the 2019 NHL Draft prospect posted a 3-0-0-1 record with a 1.70 GAA and 0.927 SV%. He also added a pair of shutouts, allowing eight goals on 110 shots through 282 minutes of action.

Garin Bjorklund of the Medicine Hat Tigers tied himself with Wolf for the most wins in the pre-season, with Blades goaltender Koen MacInnes making it a three-way tie.

A pair of rookies found themselves in the league lead for game-winning goals in the pre-season. Prince George Cougars forward Tyson Upper had a pair of deciding goals while Adam Beckman from the Chiefs also had two of his goals stand up as the difference. Zach Huber from the Hitmen also was the leading factor on a pair of wins during the team’s early success.

There was no contest to decide the highest-scoring game of the 2018 WHL Pre-season as the Portland Winterhawks and Tri-City Americans played to an 11-8 result that favoured the Oregon-based WHL team. Six players recorded multi-goal games in the Friday, September 7 game at the Toyota Centre in Kennewick, Wash. Michal Kvasnica, Nick Cicek, Ty Kolle, Jaydon Dureau, and Mason Mannek had two-goal performances for the Winterhawks while Nolan Yaremko had a pair of goals for the Americans.

The biggest margin of victory during the 2018 WHL Pre-season came this past weekend in southern Alberta the Lethbridge Hurricanes trounced the Swift Current Broncos by a 7-0 score, featuring a four-goal performance from Keltie Jeri-Leon. The next night, the Swift Current Broncos would receive a pair of goals from Matthew Culling in a 5-1 win to complete the home-and-home series.

Ending their pre-season on a strong note were the Brandon Wheat Kings, who swept a home-and-home series with the Moose Jaw Warriors, winning by 3-2 scores Friday in Brandon and Sunday in Moose Jaw. Forward Baron Thompson led the Wheat Kings with four points (2G-2A) in pre-season play while Ben McCartney scored in regulation and notched the shootout winner for Sunday’s pre-season finale.

The Prince Albert Raiders took some time to get going, but returned to top form in the final weekend of the pre-season, winning rivalry games against the Pats and Blades. Brett Leason, Spencer Moe, and Justin Nachbaur led the Raiders in the pre-season with seven points each, though Leason accomplished his total in one fewer game.

The Edmonton Oil Kings and Red Deer Rebels continued their rivalry, playing once at the Enmax Centrium in Red Deer before meeting in St. Albert this past weekend. Both teams won the home portion of their matchups and will now look forward to starting the season on a strong foot. A pair of overage forwards led both teams in scoring as Chris Douglas tallied six points (1G-5A) for the Rebels and Vince Loschiavo led the Oil Kings in the pre-season with five points (1G-4A).

The battle between the Kamloops Blazers and Kelowna Rockets began for another season with the Blazers winning both pre-season meetings, one in overtime at the Sandman Centre in Kamloops before another victory the next night at Prospera Place in Kelowna. A pair of 2019 NHL Draft prospects led the way for each club. Brodi Stuart led the Blazers in pre-season action with five points (3G-2A) while Nolan Foote had four points (3G-1A) with the Rockets.

In the Lower Mainland, the Vancouver Giants pulled together a modest 2-3-0-1 record in their pre-season action, with James Malm leading the way with four points (2G-2A) in three games.