2017 NHL Draft: Yamamoto living out one dream after another 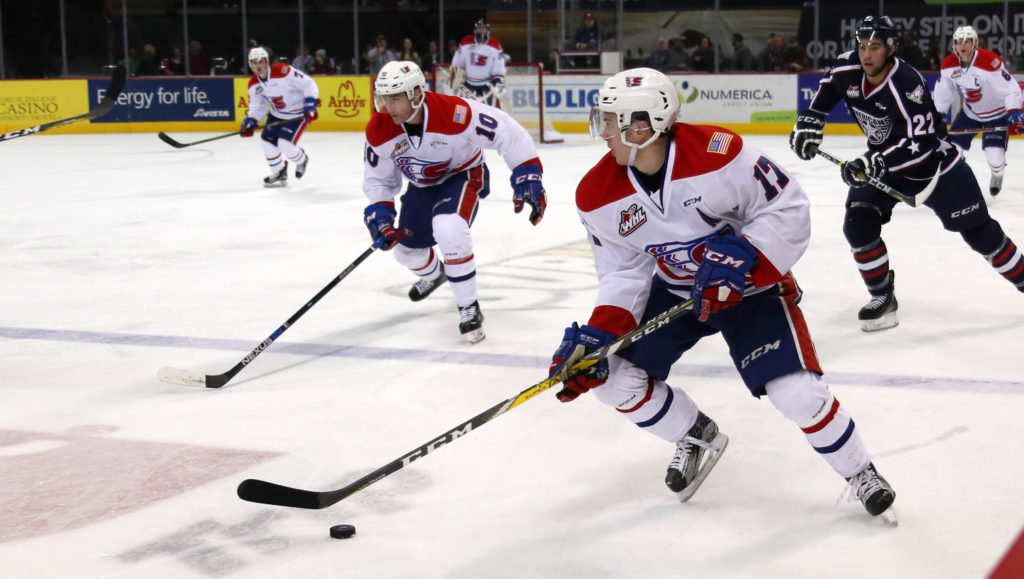 Growing up, Kailer Yamamoto always dreamed of lacing up the skates for the Spokane Chiefs. Having done that and plenty more, the locally-produced sniper now has his sights set on the 2017 NHL Draft.

“I grew up going to the games,” Yamamoto said. “I think the first game that I went to, I was four days old. My mom took me. Just being able to go to those games and grow up around it and now playing for them — it’s a dream come true.”

The 18-year-old right winger is coming off a career year with the Chiefs, which saw him post 42 goals and 57 assists in 65 games. In that time, Yamamoto was only held scoreless 11 times, never went pointless in back-to-back games, was named the Chiefs Player of the Year and made an appearance at the 2017 Sherwin-Williams CHL/NHL Top Prospects game.

But the 5-foot-8, 160-pound scorer said his NHL Draft stock as a potential first-round pick can be attributed to much more than simply his performance during the 2016-17 campaign.

“I think it’s all three of my seasons in the WHL combined,” Yamamoto said. “I think as the years went on I got progressively better and I plan on next year getting even better.”

The weeks leading up to Friday’s draft have been a whirlwind for Yamamoto, starting with the NHL Combine in Buffalo last month.

“The NHL did a phenomenal job with [the combine],” Yamamoto said. “Being in those interviews, talking with all of those NHL scouts was definitely nerve-racking; definitely an adrenaline rush, that’s for sure.”

And now the NHL Draft is just a couple of days away, the Chiefs’ fifth-round pick, 105th overall, in the 2013 WHL Bantam Draft said the knowledge he might be drafted by an NHL team hasn’t quite sunk in yet.

Heading into the draft ranked 17th among North American skaters by NHL Central Scouting, the dynamic young forward possesses exceptional speed and quickness and has excellent vision and playmaking ability, according to the Central Scouting website.

And the USA-born player has had ample opportunity to showcase those skills, both on the major junior and international stage. To date, Yamamoto has represented his country at the Under-17 World Hockey Championships, the Ivan Hlinka Memorial Tournament and the Under-18 World Junior Championship.

In addition to that, just this week, Yamamoto was invited to suit up for the red, white and blue at USA Hockey’s 2017 World Junior Summer Showcase in Plymouth, Mich., next month.

“I went to four different tournaments with them and they treat me phenomenal,” Yamamoto said. “Playing for USA, it’s something else. Being able to make those teams and play with such good players on the teams, it’s unbelievable and I’m really glad I was able to do that.”

From success on the ice in the WHL to international opportunities, Yamamoto is quick to point to the support of his parents, grandparents and other key people aiding him along the way.

“My dad, he coached me ever since I was a little kid,” Yamamoto said. “My grandma and grandpa being able to take me to the rink before I went to kindergarten two or three times a week.”

He also wanted to thank all of his coaches and his billet family from his Bantam hockey days in Los Angeles for their part in helping him get closer to achieving his dream of playing in the NHL. Now, it’s only a matter of days before he takes the next step towards making that dream a reality.

The NHL Draft takes place June 23 to 24 in Chicago, Illinois, with coverage provided by Sportsnet beginning at 4:30 p.m. MT.