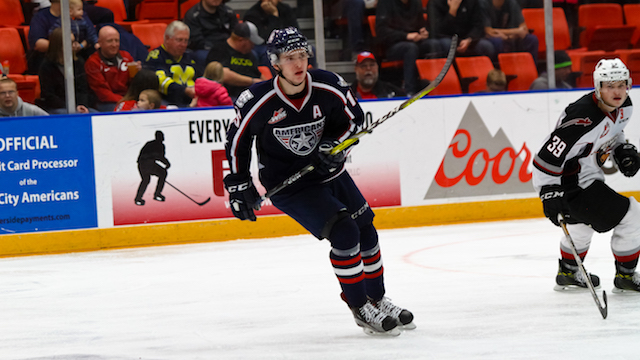 A fractured wrist may have put a damper on Michael Rasmussen’s season, but it hasn’t slowed his preparation and excitement for the 2017 NHL Draft.

The hulking 6-foot-5, 200-pound power forward was knocked out of action March 2 after suffering a fractured wrist. At the time of the injury, Rasmussen had registered career highs in goals (32) and points (55) through only 50 games played.

“It was pretty devastating, obviously, not being able to go out there with your team,” Rasmussen said. “But, for me, I don’t want to pout or anything. I got back in the gym, showed my team that I’m still going to work hard. I tried to lead by example there and I had a good group of teammates and a good group of management that really helped me to look at the positives of it.”

Just as Rasmussen’s individual numbers didn’t reach the height of their full potential due to his abbreviated season, the same can be said of an Americans’ squad that competed hard in a tooth-and-nail U.S. Division. Tri-City was not the same team without the services of their goal-scoring pivot and, as a result, was ousted from the 2017 WHL Playoffs in a first-round sweep at the hands of the eventual Ed Chynoweth Cup-champion Seattle Thunderbirds.

Despite the unfortunate end to the season, NHL scouts still hold Rasmussen in high regard. With size that strikes fear into opponents and a deft ability to finish in and around the blue paint, NHL Central Scouting has the product of Surrey, B.C., ranked fifth among North American skaters ahead of Friday’s NHL Draft in Chicago.

“I’m just excited,” Rasmussen said. “I’ve worked a long time for this. I know it’s a big step along the way. Me and my family are really excited.”

After being taken seventh overall in the first round of the 2014 WHL Bantam Draft, Rasmussen didn’t waste any time establishing himself as a powerhouse player in the U.S. Division.

During his rookie season in 2015-16, the 1999-born pivot popped 18 goals and added another 25 assists for 43 points in 63 appearances. Through his shortened 2016-17 season, Rasmussen still managed to rack up the most power-play goals (15) among all Americans, and also found himself tied for the team lead in game-winning goals with five. Those 15 power-play goals put him in a tie for sixth across the entire WHL. Imagine where he would have finished had he played a full 72-game slate.

“For me, a big summer [factored into the success],” Rasmussen said. “Last summer, I worked really hard on my shot and my skating. Obviously, we had a good team in Tri-City and I played with some pretty special players. With that kind of recipe, it’s pretty cool.”

All that equates to a quality ranking for Rasmussen, who the Americans tabbed as their captain for the upcoming 2017-18 season. Like many players will say, it’s tough to avoid reading the reports and seeing the rankings, but the challenge remains in keeping a level head about it all.

“I try not to put a number on things,” Rasmussen said. “I try not to look at that stuff too much, but you obviously come across it. That’s your goal – being a competitive person, it’s your goal to be up there with the top guys. It’s cool to see.”

Rasmussen has no shortage of quality assets to provide any NHL club with. The combination of size and scoring is enviable, and the sort of thing teams often ache to find. With that in mind, it won’t be a surprise when the former Okanagan Hockey Academy athlete hears his name called in the first round of the 2017 NHL Draft Friday night.

“I’m competitive and obviously I’m a big guy, so I protect the puck well,” Rasmussen said. “For a big guy, I think I move well and go to the tough areas of the ice – play along the boards and in front of the net.

“Being a big guy, quickness [is an area of focus, in terms of improvement]. You watch the NHL and you watch the playoffs, it’s all about quickness and speed. I’m working hard at that this summer with my strength coach.”

Rasmussen will take a short break from all that work and enjoy a fun week when he heads down to Chicago with friends and family for the 2017 NHL Draft. After that, it’s right back to the grind for the highly-motivated big man from the Lower Mainland.