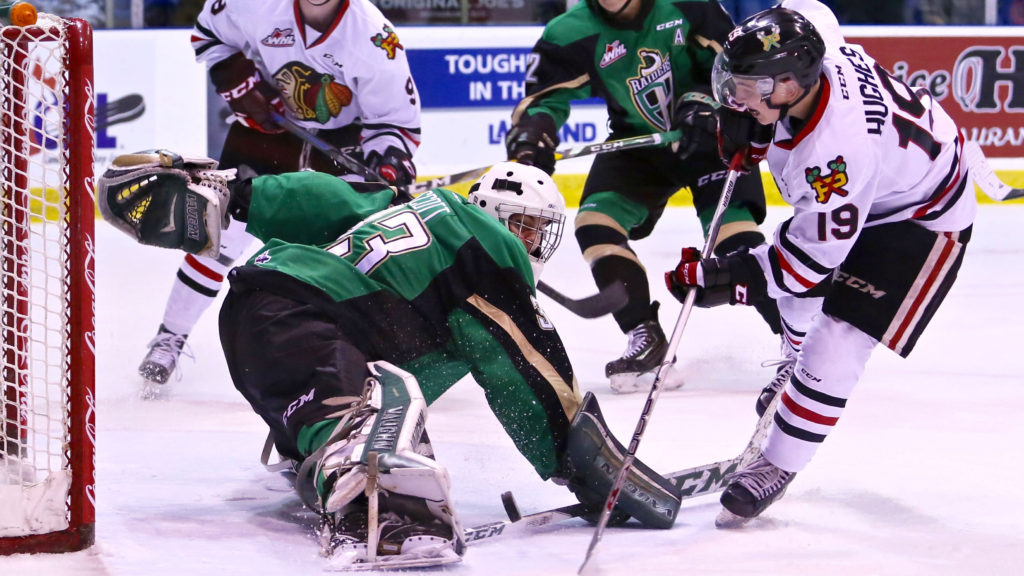 Ian Scott knew he was going to have to take on a lot more responsibility when the Prince Albert Raiders decided to make him their starting goalie at the beginning of the 2016-17 season.

“This year I obviously wanted to play more and I got that opportunity,” Scott said. “I learned a lot on the consistency part of the game and what it’s going to take to be consistent in back-to-back games and to be a starting goaltender.”

Now, after completing his first full season in the primary goaltending position for the Raiders, the Calgary product has a chance to take one step closer to making his NHL dream a reality as the 2017 NHL Draft looms on the horizon.

“It’s obviously really exciting,” Scott said. “You never know where you could go and stuff like that. It’s all just a waiting game until that day.”

Scott also faced his fair share of rubber over the course of the season, turning aside 1,391 of 1,554 shots directed towards his net.

“Having the up-and-down season that we did it just helped my mental strength,” Scott said. “Being able to bounce back from bad games and learn to have a short memory. I think that’s a huge thing as a goalie.

“That’s something I grew up being preached was just goalies have a short memory. Having that through my minor hockey, that really helped me this year.”

This isn’t the first time Scott has faced adversity in his young hockey career; the second-year WHLer missed his entire first year of Bantam due to knee surgery.

“It was definitely tough taking the year off and just kind of sitting and watching on the sidelines but I think it taught me some good life lessons,” Scott recalled, adding that the mental toughness he gained from going through the injury has been indispensable in his first two years in the ‘Dub.

NHL Central Scouting ranked the 18-year-old third among North American goalies in their final rankings, noting that he is a big net presence that has “excellent leg extension protecting the low corners while sealing the ice and protecting the five-hole.”

The league’s scouting service also noted Scott’s calm and relaxed demeanor and touted the goalie as having “excellent NHL potential.”

In addition to playing for the Raiders this season, Scott also suited up for Team Canada at the Ivan Hlinka Memorial Tournament and participated in the 2017 Sherwin-Williams CHL/NHL Top Prospects Game.

It’s been a busy last couple of weeks for Scott, who attended the NHL Combine in early June.

“It was a pretty cool experience,” Scott said. “Any time you get to sit in a room with a bunch of scouts and managers and stuff like that, you always get lots of feedback from what they’ve seen over the last couple of years. It was just a really cool experience.”

But his off-season development schedule didn’t end at the Buffalo scouting combine, as a week later he was back in his hometown to participate in Hockey Canada’s Program of Excellence goaltending camp.

“A lot of it focused on tracking the puck and breaking down the game,” Scott said. “Just little things like bringing my head down more. Practicing that stuff over the past weekend, I think I noticed a difference so it’s something that I can definitely apply to my game now.”

Now all that remains for Scott is to wait and see where he goes on draft day, which he’ll be spending in Calgary with his family and friends.

He said he wanted to thank his parents and coaches for helping him get to this point in his hockey career.

“All the way from minor hockey when I was a player just driving me to the rink early, stuff like that and when I was younger paying for all those goalie camps and goalie sessions. The endless amount of support they gave me.”

The 2017 NHL Draft takes place June 23 to 24 in Chicago, Illinois, with coverage provided by Rogers Sportsnet beginning at 4:30 p.m. MT.