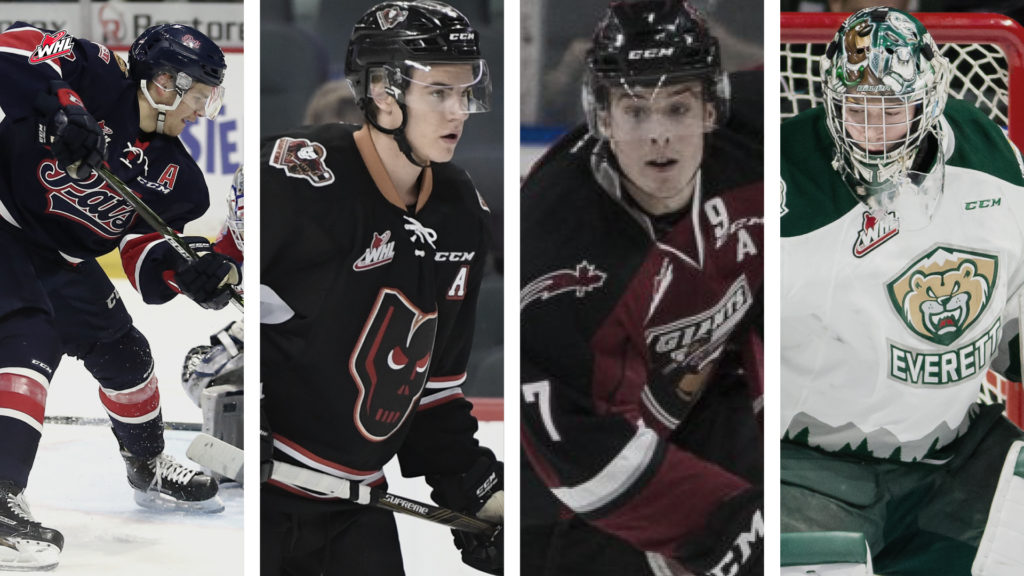 As the first puck drop of the 2017-18 Western Hockey League regular season approaches, the league will once again play out a 792-game schedule with 22 teams battling for the coveted trophy of the Ed Chynoweth Cup.

With a flurry of off-season moves, the landscape of the league looks drastically different from what it was like when Alexander True’s overtime goal lifted the Seattle Thunderbirds to their first ever league championship.

The league’s play-by-play broadcasters have been tracking the changes to their team’s rosters and the other clubs throughout the league.

With that in mind, their minds were probed on a number of different topics throughout the league, making their selection for the top teams from each division to the winner of the individual awards. The lone requirement for the poll was that broadcasters could not choose their own team or players from that team in their selections.

With that in mind and the votes tabulated, the results were as follows.

Pertaining to the regular season, broadcasters once again picked the Pats and Warriors to finish as the top team in the league, with the top teams hovering around 50 wins for the season. The only other choices for top regular season finishers came from the U.S. Division as Portland, Tri-City and Everett were selected in the poll.

Opposing the winning squads, 31.58 per cent of broadcasters believed the Winterhawks would finish as the season’s runner-ups with the Tri-City Americans close behind with 26.32 per cent of the votes. The Kelowna Rockets and Everett Silvertips also earned votes.

There was a split decision when it came to deciding who the best player in the league would be this season as both Regina’s Sam Steel and Moose Jaw’s Jayden Halbgewachs earning 36.84 per cent of the votes cast.

On the blue line, broadcasters believed Tri-City Americans defender Juuso Valimaki would be the top defenceman in the league. Not far behind though were the likes of Kale Clague as well as a pair of Central Division defenders in Jake Bean and David Quenneville.

There was little doubt by the broadcasters as to who would be the league’s top goaltender, with Everett Silvertips net minder Carter Hart earning 61.11 per cent of the votes cast. The closest challenger to Hart was Lethbridge’s Stuart Skinner, who earned 22.22 per cent of the votes. Griffen Outhouse and Dylan Ferguson also earned votes.

Voting to project the league’s rookie of the year was less easy, with six different players being selected as potential candidates. Kootenay ICE forward Peyton Krebs, 37.5 per cent, edged out Saskatoon Blades rookie Kirby Dach, 25 per cent, by just a few votes.

Behind the bench, the broadcasters continued their love for the U.S. Division by projecting Portland Winterhawks head coach Mike Johnston as the league’s head coach of the year. Eight different head coaches across the four divisions earned selections. Tri-City’s Mike Williamson and Moose Jaw’s Tim Hunter tied for second place with 16.67 per cent each compared to the 33.33 per cent voting for Johnston.

Overall, the broadcasters believed the winners of each division would come from Regina, Lethbridge, Kelowna and Portland, though some of those were close decisions. The Pats narrowly edged out the Warriors in the East. The Hurricanes won the largest plurality, with 72.22 per cent of broadcasters picking them.

In the B.C. Division, the Victoria Royals finished second, drawing 33.33 per cent of responses while the Winterhawks (47.06 per cent), narrowly edged the Americans (35.29 per cent) for the division favourite.

The final question provided optimism for the six clubs that missed out on the 2016-17 edition of the WHL playoffs.

With those clubs looking to abruptly end their playoff drought this coming season, broadcasters labelled the Spokane Chiefs (41.18 per cent) as the team most likely to make it back into the post-season. The Vancouver Giants (23.53 per cent) were listed as the next best non-playoff club to make it into the 2017-18 post-season.

The action all begins Friday September 22 with eight games kicking off the season for 16 WHL clubs.