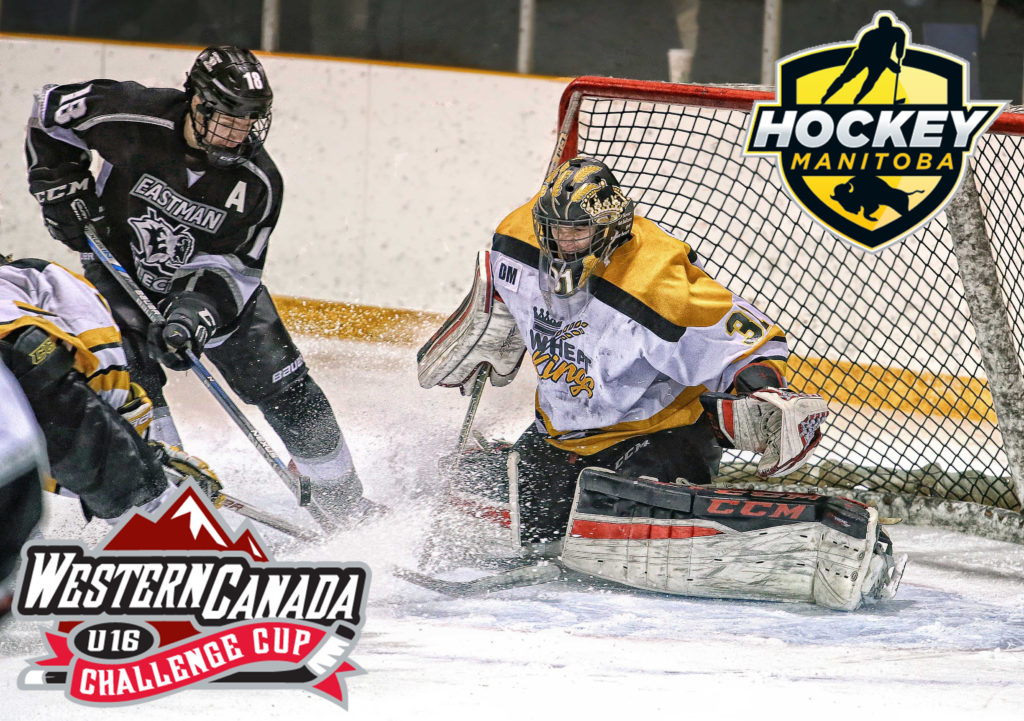 CALGARY, AB – Trent Miner doesn’t know the taste of defeat at the Western Canada U16 Challenge Cup, but he’s heard about it first-hand from head coach Rob Smith. As far as the 15-year-old prospect of the WHL’s Vancouver Giants is concerned, his coach and Team Manitoba don’t plan on tasting leftovers when the 2016 edition of the annual tournament opens Wednesday at the Markin MacPhail Centre in Calgary.

“We talked with coach Rob about it and he was saying how terrible it felt last year to have that happen to them,” Miner said. “We just don’t want that to happen again this year. We’re going to do whatever it takes.

“It’s a big event, not just for me, but for the whole team. We’re all looking forward to going to Calgary knowing we’re representing so many people – the name that is a part of your logo just means so much.”

With Miner manning the crease, Team Manitoba has a strong backbone heading into 2016 after suffering a crushing defeat at the hands of Team Alberta in 2015.

As for Smith, he was an assistant coach last year as Manitoba dropped a 3-0 decision to Alberta in the championship game. With the 2016 Challenge Cup only days away, the Manitoba bench boss is eagerly anticipating an opportunity to work towards a different outcome starting this week.

“We want to win,” Smith said. “If I didn’t say that as a coach, I’d be sending the wrong message. We’re definitely coming to win. For our guys, it’s just about playing the way we can. We have an identity of how we’d like to play the game and that’s the expectation for our group – we just want to come out in game one, play that way and continue that through the tournament. If we do that, we’ll have an opportunity to have success.”

Of the 20 players on the Manitoba roster, 18 had their names called at the 2016 WHL Bantam Draft, while defenceman Chad Nychuk has since been listed by the Wheat Kings. Defenceman Parker Malchuk represents the lone player not currently on a WHL Club list.

“Our game is going to be built more around hard work and keeping it simple – getting pucks to the net with traffic.”

For a lot of the players set to take to the ice at the 2016 Western Canada U16 Challenge Cup, the tournament represents an opportunity to implement lessons learned at their first WHL training camps this fall.

Miner, who was selected 20th overall in the first round of the 2016 WHL Bantam Draft by the Giants and signed with the club this summer, gleaned some sage advice from his first WHL camp in the Lower Mainland and he’s already keeping his mind focused on that.

“Live in the now – don’t worry about the future and forget about the past,” Miner said. “You can’t control how you did last period or on the last shot. You’ve just got to forget about it and move on, get ready for the next one. It’s a fast game.”

Those are strong and mature words coming from a 15-year-old goaltender, so it’s easy to see why Smith and Team Manitoba looks to Miner as one its ultimate leaders.

“Not only is Trent a really good goalie, he’s a really good leader,” Smith said. “The guys listen to him, they respect him and they follow him. There’s a ton of confidence in between the pipes for us and our whole group knows it. He’s a star player. You don’t get that every year and that’s going to give us more of an opportunity to have success.”

Miner, Smith and the rest of Team Manitoba will arrive in Calgary early this week before opening the 2016 Western Canada U16 Challenge Cup on Wednesday, Oct. 19 at 3 p.m.

“Our team isn’t the most skilled or the biggest team, but I think we’re definitely the grittiest team,” Miner said. “We’re going to wear teams down and we’re going to be the hardest-working team there. We’re going to find a way to win games.”

The Western Canada U16 Challenge Cup has been sponsored since 2009 by the WHL and has been made possible through financial support provided by the WHL, Hockey Manitoba, BC Hockey, Hockey Alberta, Saskatchewan Hockey Association and Hockey Canada.

This marks the sixth edition of the event. The first Western Canada U16 Challenge Cup was held in Blackfalds, Alta., in 2009 and featured four of the top eight players selected at the 2012 NHL Entry Draft. In 2011, the Moose Jaw Warriors and Saskatchewan Hockey Association hosted the event at Mosaic Place in Moose Jaw. In 2012, the tournament returned to Alberta, hosted in Calgary at Father David Bauer Arena – home of the WHL – where it remained for two years. In 2015, the tournament was once again hosted in Calgary, but shifted to the Markin MacPhail Centre.

Team Alberta is a four-time champion of the Western Canada U16 Challenge Cup, capturing the title in 2009, 2011, 2013 and 2015. Team BC won the event in 2012, while Team Manitoba and Team Saskatchewan are still seeking the crown.

Team Manitoba Round-Robin Schedule
*all games to be played at Markin MacPhail Centre in Calgary, Alta.