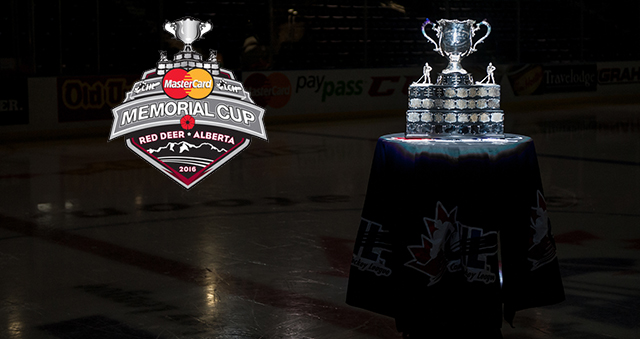 Here’s a look at the four teams who will be competing for the 2016 MasterCard Memorial Cup:

The 2016 WHL Champions, the Brandon Wheat Kings are making their fifth appearance in the MasterCard Memorial Cup tournament and first since hosting the annual event in 2010. That season, the host Wheat Kings strived their way to the Memorial Cup Championship game before dropping a 9-1 decision to the Windsor Spitfires. In 1996, Brandon went 2-1 in the round-robin to vault themselves to the semi-final game against the Peterborough Petes in which they fell by a 4-3 score.

The 2015-16 Brandon Wheat Kings boast a strong offensive unit that scored a total of 89 goals in the post-season to capture the 50th Ed Chynoweth Cup. Led by second year forward and WHL Playoff MVP Nolan Patrick, the Wheat Kings had 10 skaters reach double digits in post-season points, including five with at least 24 points. Patrick and teammate Jayce Hawryluk finished tied for first in WHL Playoff scoring with 30 points each while veteran forward John Quenneville ranked third with 27 points, including 16 goals to lead all WHL skaters. Special teams contributed to the Wheat Kings post-season success as their power play clicked for 17 goals at a rate of 20.0% while their penalty kill was steady with a 77.6% success rate. Furthermore, the Wheat Kings netted six short-handed goals to lead all playoff Clubs.

Defensively, Brandon got strong two-way performances from Philadelphia Flyers prospect Ivan Provorov and NHL Draft eligible blue liner Kale Clague. Provorov contributed for 13 points (3g-10a) and a plus-22 rating while Clague tallied 14 points (6g-8a). Wheat Kings’ captain Macoy Erkamps rounded out a stingy defensive unit as he posted a League-best plus-24 rating to go along with 14 points (4g-10a) on the score sheet. Wheat Kings netminder Jordan Papirny carried the majority of the load during Brandon’s title run. Along the way, Papirny posted a record of 16-5 with a 2.93 goals against average and an .897 save percentage with one shutout to backstop the Wheat Kings to their third WHL Championship.

The Red Deer Rebels return to the MasterCard Memorial Cup tournament for the second time in franchise history as hosts. Their first appearance was back in 2001 when the tournament was held in Regina, SK. That year, the Rebels went 2-1 in the round-robin to punch their ticket to the Championship game in which they edged the Val-d’Or Foreurs 6-5 in overtime to capture their lone Memorial Cup title.

The Red Deer Rebels possess an offensive unit that is capable of scoring goals in bunches as they buried 55 in 17 contests throughout their post-season run in the WHL Playoffs. Rebels forward Adam Helewka led the Club with 18 points (9g-9a) while Boston Bruins prospect Jake DeBrusk finished second with 17 points (8g-9a). The two combined to score nine of Red Deer’s 15 power play goals. Acquired from the Kootenay ICE mid-season, forward Luke Philp chipped in with 13 points (4g-9a) and a plus-4 rating while appearing in all 17 post-season contests.

Defensively, Haydn Fleury and Colton Bobyk lead a blue line that can demonstrate aspects of shutdown hockey. The Rebels limited the Regina Pats to only one goal in a decisive 2-1 victory on home ice in Game 7 that catapulted the Rebels to a Round 2 series win and a trip to the WHL Eastern Conference Championship Series. Fleury recorded nine points (4g-5a) while Bobyk registered eight points (2g-6a) in the Rebels’ playoff run. Trevor Martin was solid for the Rebels in the absence of starting goaltender Rylan Toth during the first two rounds of the 2016 WHL Playoffs. Martin posted six victories to go along with a 3.05 goals against average, a .905 save percentage and one shutout. Toth returned midway through Round 2 and registered a .905 save percentage with three victories in the latter half of the Rebels post-season run.

The London Knights are looking to claim their second MasterCard Memorial Cup title as the Club returns to the tournament for the fourth time in five years. Overall, the Knights make their fifth appearance in the tournament, having won their lone Memorial Cup title in 2005 as the host Club when they went undefeated in the round-robin and prevailed over the Rimouski Oceanic in the final game by a score of 4-0. The Knights previously hosted the tournament in 2014 in which they posted an 0-3 record.

The London Knights boast an offence that has star power as the Club scored 84 goals en route to capture their fourth J. Ross Robertson Cup in franchise history as 2016 OHL Champions. Toronto Maple Leafs prospect Mitchell Marner led all OHL skaters in playoff scoring with 44 points (16g-28a) while Matthew Tkachuk led the way in the goal scoring department with 20 to go along with 20 assists for 40 points in total. The Knights power play was consistent as they converted on 27.9% of their opportunities, scoring a league-best 19 times. The play of the penalty kill also factored into the Knights success. Although they only converted 75.0% of their penalties, the Knights showed their offensive prowess as they succeeded in scoring five short-handed goals which was tied for first amongst all OHL playoff Clubs.

Led by Olli Juolevi, the Knights’ defence corps allowed the fewest goals against in the OHL during the regular season having only allowed 182 on top of allowing only 40 against in 18 playoff games. The Knights also held the vigorous Erie Otters to only seven total goals over four games in the OHL Western Conference Championship Series. Knight’s goaltender Tyler Parson was consistent as he started all 18 games in the post-season to pick up 16 wins, a 2.15 goals against average and a .925 save percentage with one shutout.

The Rouyn-Noranda Huskies make their first trip to the Memorial Cup Championship after a stellar performance in the playoffs that saw them post a record of 16-4. The Huskies were the top team in the Canadian Hockey League with a record of 54-9-3-2 in the 2015-16 regular season.

Up front, the Huskies have a trio of NHL prospects that includes Timo Meier, Francis Perron and Anthony-John Greer. Ottawa Senators prospect Francis Perron led the QMJHL in post-season scoring with 33 points (12g-21a) while San Jose Sharks prospect Timo Meier filled the score sheet with 23 points (11g-12a) in 18 contests. Rouyn-Noranda boasts eight NHL prospects on their current roster which leads all Memorial Cup participants and led the QMJHL in total goals in the regular season with 302. The Huskies come into the tournament with a stingy defence as they allowed the fewest goals against of the four Clubs in post-season play. The Club also boasts depth up front with Martins Dzierkais and Mathieu Boucher amongst 10 players that reached double digits in playoff points. Special teams played a crucial role for the Huskies as they converted on 32.3% of their power play chances while the penalty kill owned an 85.2% rate.

Nikolas Brouillard was third amongst QMJHL blue liners in post-season points with 20 (5g-15a) and his plus-10 rating was good enough for sixth-best. Philippe Myers and Jeremy Lauzon lead a blue line that will be key in shutting down the offensive stars of the other three Clubs at the Memorial Cup tournament. Goaltender Chase Marchand will look to pick up where he left off after an impressive post-season run that saw him post a league-best 1.35 goals against average in the QMJHL playoffs. Marchand also posted a steady .946 save percentage and six shutouts in 19 appearances.

All nine games of the championship will be broadcast live on Sportsnet and TVA Sports.