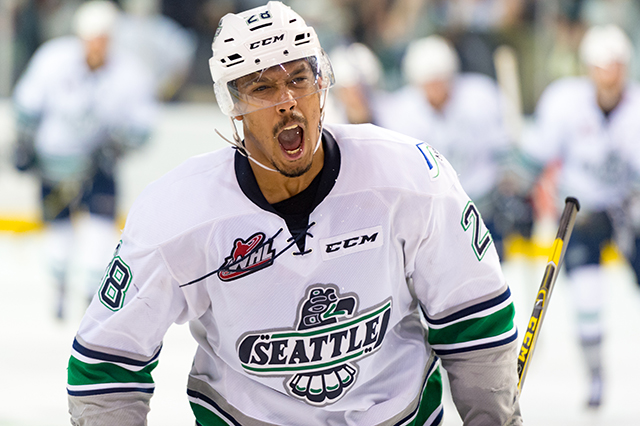 In our second divisional preview, we break down the U.S. Division, in order of standing from 2015-16.

In the U.S. Division, two clubs roll out new names in 2016-17… well, sort of. Mike Johnston isn’t exactly a new name, but he returns for a second stint with the Portland Winterhawks after a tour with the NHL’s Pittsburgh Penguins. Meanwhile, Scott Carter is the new man in charge as general manager of the Spokane Chiefs.

Forwards: Mystery shrouds Barzal’s status – will the NHL’s New York Islanders keep him or will they send him back to the Emerald City? If Barzal returns to Seattle, the Thunderbirds should be able to repeat as U.S. Division champions. If he remains in the NHL, the Thunderbirds still hold a fighting chance, but might be pushed a little more… Gropp is expected to stay pro, so his offense will need replacing… RW Keegan Kolesar (30-31-61) will be back and can help fill the offensive void left by Gropp… RW Layne Bensmiller (11-19-30) is the newest soldier up front…

Defence: Bear is a key returner, but gone are captain Jerret Smith (9-42-41) and Jared Hauf (2-13-15)… LD Bryan Allbee (8-10-18) is back for his first full campaign in Seattle after coming over from Kootenay prior to the trade deadline… LD Turner Ottenbreit (5-11-16) returns along with LD Brandon Schuldhaus (2-4-6)… Recently-acquired LD Anthony Bishop (0-2-2) comes into the fold from Saskatoon…

Player to Watch: Outside of Barzal watch, Kolesar will be tasked with kicking it up a notch as Gropp goes pro. A 2015 third round pick (69th) of the NHL’s Columbus Blue Jackets, the 6-foot-2, 223-pound Kolesar has all the tools to run roughshod in the U.S. Division this coming season.

Prognosis: If Barzal returns, the Thunderbirds likely runaway with the U.S. Division. If he does not return, then it’s up for grabs. One way or another, Seattle should once again make noise in the Western Conference.

Forwards: The Silvertips were the lowest-scoring team in the U.S. Division last season and the loss of Laurencelle and Stadnyk won’t make offense any easier to come by… Tuulola, a sixth round pick (156th) of the NHL’s Calgary Flames, stands 6-foot-3 and weighs in at 225 pounds. He could have a sizeable impact as a newcomer… C Connor Dewar (11-7-18) registered four goals in five pre-season games and should grow into a bigger role as a 17-year-old… Captain Dawson Leedahl was shipped off to Regina…

Player to Watch: Can Carter Hart follow up on his outstanding 2015-16 season with an even better performance in 2016-17? The Silvertips will need just the same if not better from the Philadelphia Flyers second round pick if they’re to challenge the Thunderbirds for the division crown.

Prognosis: Kevin Constantine clubs almost always tend to be super stingy and defensively sound, so to expect any less in 2016-17 would be foolish. Losing Laurencelle, Stadnyk and Leedahl up front will hurt, but with names like Juulsen and Hart holding down the fort, Everett will once again put forth a formidable defense. Tuulola could be the difference-maker that helps this team challenge the Thunderbirds.

Forwards: Turgeon, Schoenborn and Bukarts have moved along to the next chapter… With three imports on the roster, there’s a very good chance the 20-year-old Abols remains within the Vancouver Canucks organization… There’s plenty of expectation for 17-year-old C Cody Glass (10-17-27), a former first round pick, as he enters his second campaign… RW Colton Veloso (11-7-18) had himself seven points in five pre-season contests… C Alex Overhardt (9-14-23) also had a productive pre-season, as did RW Evan Weinger (10-15-25)…

Player to Watch: Jokiharju is already being touted as a potential first round pick at the 2017 NHL Entry Draft. With this being his first season in North America after the Winterhawks took him with the 25th overall pick at the 2016 CHL Import Draft, it will be interesting to see how he acclimatizes to the Western League game. A native of Oulu, Finland, Jokiharju registered 29 points in 47 games with Tappara U20 of SM-liiga Junior A in 2015-16. He also collected a gold medal as a member of the Finnish national team at the 2016 IIHF U18 World Championships in Grand Forks, N.D.

Prognosis: Mike Johnston is back. After spending parts of two seasons as the head coach for the NHL’s Pittsburgh Penguins, Johnston parted midway through the 2015-16 season. Once May 2016 rolled around, the Winterhawks were quick to snap him up as the replacement for Jamie Kompon. This is Johnston’s first year in his second stint with the Winterhawks, though he previously spent six seasons with the club (2008-09 to 2013-14), winning a WHL title in 2012-13. Portland might be moving ahead without a few key stars from last year’s edition, but guaranteed Johnston will find a way to make this a difficult group to play against as they chase down an eighth consecutive post-season appearance.

Forwards: While Nolan Patrick is the talk of the east, the dynamic Kailer Yamamoto is almost certainly the talk of the west. The speedy winger was awe-inspiring as a 17-year-old last season and should only be more dangerous as he enters his NHL Draft year. There’s a reason scouts are already talking about him being high-end first round talent… The older Yamamoto brother Keanu provides a quality veteran presence along with Hudson Elynuik (19-25-44) and Bechtold (17-31-48)… Zwerger will likely be the odd-man out in both the 20-year-old and import circles… Jaret Anderson-Dolan (14-12-26) is emerging as a quality talent in his own right… 16-year-old Koby Morrisseau, the ninth overall selection in 2015, should make the jump and has plenty of promise…

Goal: Sittler comes in after a strong campaign north of the border with the Lethbridge Hurricanes, while 18-year-old Matt Berlin (1-1-2, 4.38, .851) looks at his first year of full-time duty after Tyson Verhelst retired during the offseason…

Player to Watch: When talking about 16-year-old rookies around the league, Smith is certainly the most intriguing after going first overall in 2015. He tallied two assists in a two-game taste-tester last season and managed five assists in six pre-season games this fall. There will likely be growing pains at times, as there will be with any young player adapting to the junior game, but Smith is as close to a sure thing as the Chiefs have seen in years.

Prognosis: Don Nachbaur is one of the winningest coaches in major junior hockey for a reason and with some of his young stars carrying one more year of experience, there’s a very real chance the Chiefs could be the darkhorse in the U.S. Division. A lot of that will rest on how Smith can impact the game as well as on how the tandem of Sittler and Berlin can backstop things in the blue paint. Away from the ice, but in the player personnel department, Scott Carter is one of the aforementioned new faces around the league and takes over from the legendary Tim Speltz.

Forwards: Leading scorer Bowles is  out of the picture but Topping returns… The big man C Michael Rasmussen (18-25-43) seemingly grew more since last season and should be a beast in 2016-17… C Carson Focht, the team’s top pick (seventh overall in 2015), seems ready to make the jump after logging four points in seven pre-season games… Another 2000-born forward, Keltie Jeri-Leon has emerged in pre-season and could push for a roster spot after Tory dealt C Jordan Roy (2-1-3) to Red Deer, citing the emergence of young talent as part of the thought process…

Defence: Valimaki (7-25-32) was the team’s big prize from the 2015 CHL Import Draft, selected 14th overall and returns for a second season. The 1998-born Finn is already entering conversations for early consideration at the 2017 NHL Entry Draft… Wotherspoon could return from the NHL’s New York Islanders and will provide a solid and experienced two-way anchor… The big loss comes in the form of Brandon Carlo (4-23-27) who is expected to graduate to the pro ranks within the Boston Bruins system… RD Dakota Krebs (0-0-0), RD Kurtis Rutledge (1-6-7), RD Brendan O’Reilly (1-5-6) and RD Dylan Coghlan (4-20-24) all return with an extra year of experience under their belts… The curious case could come in the form of 16-year-old RD Seth Bafaro, a 2015 third round pick, who got into a trio of games last season…

Player to Watch: It’s tough not to have your eyes on the 6-foot-5 towering presence of Rasmussen. Like the younger Yamamoto, he provides yet another blossoming talent for U.S. Division fans to enjoy and will, in all likelihood, find himself selected in the early stages of the 2017 NHL Entry Draft.

Prognosis: The Americans just narrowly missed the mark in 2015-16. With a more experienced Rasmussen leading a forward group featuring a blend of veteran presence and youthful exuberance, plus a more experienced Valimaki combining with Wotherspoon to lead a well-rounded blue line, the Americans will be right in the mix once again in 2016-17. There’s no question the U.S. Division is going to be a dogfight from start to finish.

Keep your eyes on WHL.ca for more divisional previews this week. We will dig into the WHL’s Central Division on Wednesday.