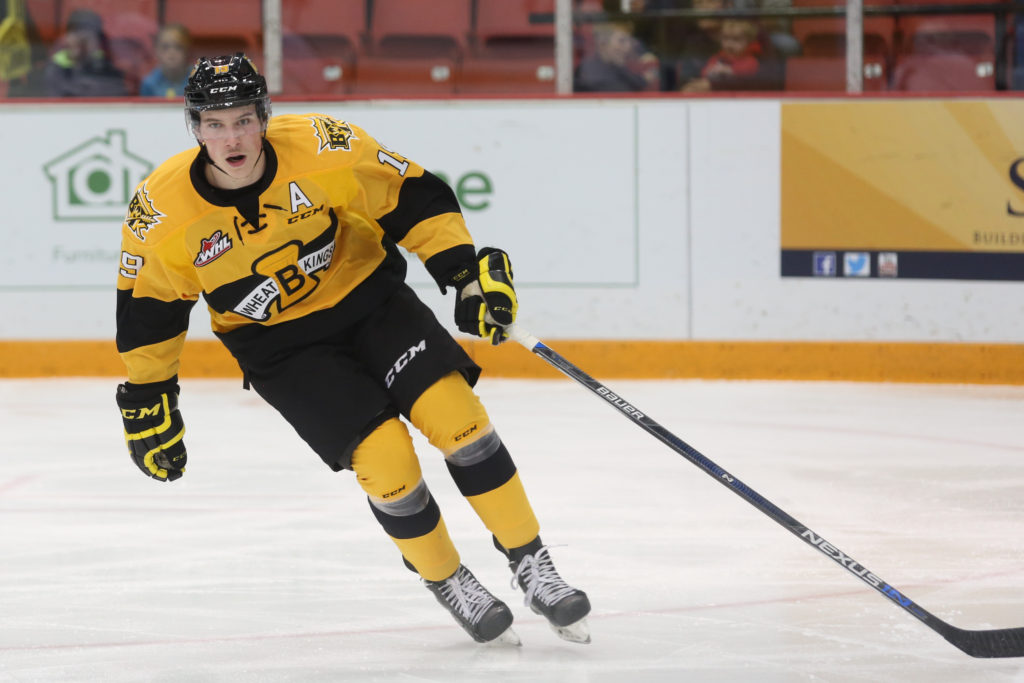 We begin our divisional previews by examining the East Division, in order of standing from 2015-16.

In the East Division, three clubs send fresh flesh to the wolves in 2016-17, including the Brandon Wheat Kings, Swift Current Broncos and Saskatoon Blades.

Forwards: C Nolan Patrick takes over as the undisputed top gun for the Wheat Kings in 2016-17. The 6-foot-3, 198-pound power forward is arguably the mostly highly-touted prospect heading into the 2017 NHL Entry Draft, widely projected to go first overall, and very well could be the best player in the WHL this season… Now is the time for C Stelio Mattheos (13-17-30) to step into a larger role following the departure of Hawryluk and Quenneville… Can 2015 first round pick (22nd) C Caiden Daley crack the roster? … With three overage forwards and Papirny, someone up front will be the odd man out…

Defence: The biggest question on the blueline is whether or not Provorov (21-52-73) will be returned from the NHL’s Philadelphia Flyers. If the high-flying Russia rearguard is sent back to Brandon, the Wheat Kings will once again be absolutely dominant… RD Kale Clague (6-37-43) was selected by the NHL’s Los Angeles Kings (2-51) and will look to take on a bigger role, especially if Provorov remains in Philadelphia… Bukac is a towering presence at 6-foot-5…

Player to Watch: All eyes everywhere within the hockey world will be set solely on Nolan Patrick for the 2016-17 WHL season. Can he lead the WHL in scoring one year after finishing fifth in the race? Just how dominant will he be? Scouts have already denoted him as the projected favourite to go first overall at the 2017 NHL Entry Draft – will he solidify that stock or slip in the rankings? With 72 goals and 159 points in 130 career WHL games, the trends suggest fans have only seen tip of the iceberg when it comes to Patrick’s pure ability…

Prognosis: The Wheat Kings will once again be a playoff team and should fight tooth and nail for the East Division crown while celebrating their 50th season. The x-factor exists in Provorov – if he returns, this team can take the division. If he sticks with the Flyers, perhaps there is a new East Division champion in 2016-17. The post-Kelly McCrimmon era begins now after the ultimate face of the Wheaties joined the NHL’s fledgling Las Vegas expansion franchise. Regardless, Brandon will once again be a power in the East Division, even with the youngest head coach in the league.

Forwards: Gardiner returns as does Stransky… Offense of Tkatch is lost, but the heart and soul of captain Vanstone remains. He posted eight points in three pre-season games. That production could go a long way to filling the void left by Tkatch… LW Nic Holowko (6-14-20) is the newest addition via trade with Seattle… Four 2000-born forwards remain, including RW Spencer Moe, RW Nikita Krivokrasov, C Carson Miller and C Cole Fonstad. How many will survive the final cut down? … Like Brandon, the Raiders hold three overage forwards, plus Parenteau. Someone will have to go… Hometown C Drew Warkentine (3-2-5) is back…

Player to Watch:  C Cole Fonstad was the Raiders top pick (first round, fifth overall) at the 2015 bantam draft. He clicked for three points (1-2-3) in five pre-season games and stands a good chance at making the club. Standing 5-foot-10 and weighing in at 158 pounds, he still needs to fill out, but has what it takes to be an impact player some day.

Prognosis: The East Division isn’t going to be an easy place to play  this season, though the Raiders should once again be a playoff team under Habscheid. But nothing is going to be handed out with the likes of the Wheat Kings and Regina Pats stomping around.

Forwards: There isn’t any way to immediately replace what the Warriors lost this offseason, saying goodbye to Hunt and Point… Popugaev (16-31-47) will be relied upon to carry a heavier offensive load. Standing 6-foot-6 and weighing 202 pounds, he has the frame to dominate and posted nine points in five pre-season games… Rookie C Luka Burzan, the sixth overall pick from 2015, had himself a strong exhibition campaign with five points in seven games…. Brett Howden (24-40-64) was a first round pick (27th) of the NHL’s Tampa Bay Lightning and will need to kick it up a notch…

Defence: Thrower is the veteran pillar, while Tanner Faith aged out after 2015-16… Zaitsev was a first round pick (34th) at the CHL Import Draft and also nabbed by the NHL’s Washington Capitals (seventh round, 207th). He will aim to be an offensive catalyst from the back end… Sozanksi arrived in an off-season trade with Spokane and compliments Thrower… The big excitement revolves around the landing of RD Jett Woo, the team’s top pick (fourth overall) at the 2015 bantam draft. The Winnipeg product played seven regular season games and five post-season contests in 2015-16, managing two assists. He could be one of the best 16-year-olds in the Eastern Conference this season…

Player to Watch: Jett Woo and Luka Burzan were the Warriors big haul from the 2015 WHL Bantam Draft. Both will make the leap in 2016-17 and very well could have significant impacts in their rookie campaigns.

Prognosis: The Warriors will take a step back in 2016-17 as there simply are no immediate successors to the high-flying Hunt and Point. That being said, the team should scrap for a playoff spot in the East Division once again. Exactly where they land will depend on how effective the likes of Woo and Burzan can be in their rookie years, as well as how much extra Tim Hunter can milk out of Howden, Gregor and Popugaev.

Forwards: Some suggest Brooks, a Toronto Maple Leafs prospect, will return to the Pats for 2016-17. Others believe he will graduate and make his way to the AHL’s Toronto Marlies. The fate of last year’s WHL-leading scorer will weigh heavily into the fate of the Pats. If Brooks returns, there’s a strong chance the Pats can be East Division champions… RW Nick Henry was a coup for the Pats and WHL, decommitting from NCAA Western Michigan. He finished second in pre-season scoring as a 17-year-old and should provide a dynamic presence moving forward… Steel returns fresh off being selected in the first round (30th) by the NHL’s Anaheim Ducks… Wagner, the team’s third-leading scorer, also returns… Throw in the 6-foot-4, 225-pound Ahl – an Ottawa Senators prospect – and the Pats are packing a lethal group up front… Is there any question as to why some people are picking Paddock’s posse to raise the Ed Chynoweth Cup in 2017?

Player to Watch: Henry made noise when he bolted the NCAA and headed back north of the border. After an impressive pre-season showing that featured five goals (two power play, two shorthanded) and 11 points, he backed up the hype that had WHL fans excited upon his initial signed with the Pats. Now, the test will be for the 6-foot, 190-pound winger to carry that forward into the regular season and add valuable scoring depth to an already talent-laden Pats squad.

Forwards: All the talk has been about Heponiemi to this point, after the 17-year-old led the WHL in pre-season scoring with five goals and 15 points in five games. The 10th overall pick at the 2016 CHL Import Draft certainly has people talking since he arrived in North America. But at 5-foot-10 and only 141 pounds, the grind of a WHL regular season could be a greater challenge… Martin was a feel-good story in 2015-16 and unfortunately for the Broncos, his leadership, scoring ability and brute strength aged out… Gawdin was selected by the St. Louis Blues (4-116) in 2015 and is back once again. He, along with C Tyler Steenbergen (20-26-46) will need to find more offense to help alleviate the loss of Martin… Pederson was lights out after coming to Speedy Creek from the Red Deer Rebels, posting 34 points in 37 games with the Broncos…

Player to Watch: Heponiemi will be the focal piece for the Broncos until his paces slows or someone else decides to run alongside him. Either way, the 2017 NHL Entry Draft eligible prospect will absolutely be key to success for Swift Current this season.

Prognosis: The Broncos are celebrating their 50th season, just like their East Division counterparts in Brandon. Unfortunately for fans in Swift Current, this edition of the Broncos is not quite as deep as their rivals from southern Manitoba. If Heponiemi continues to play like a man possessed while Gawdin and Pederson fill the leadership and offense vacated by Martin, perhaps the Broncos can challenge for a wild card slot.

Forwards: Gay and Zajac aged out leaving a significant void in terms of both offense and leadership, but Hebig returns and should take on an even bigger role… C Wyatt Sloboshan (19-25-44) is back and will be leaned on for more, as will RW Mason McCarty (18-10-28)… LW Braylon Shmyr (17-19-36) came over midseason from Brandon and, as a former first round pick, will look to add some offense… LW Chase Wouters, the team’s 18th overall pick from the 2015 bantam draft, will aim to make the jump…

Defence: Hajek (3-23-26) was taken by the NHL’s Tampa Bay Lightning (2-37) this past summer and returns to lead the blueline… He is joined by yet another import defenceman – Rubinchuk was taken seventh overall at the 2016 CHL Import Draft and has been impressive thus far with four points in six pre-season games… RD Nolan Reid (4-22-26) and RD Jake Kustra (1-5-6) return…

Player to Watch: Hebig was passed over at the 2016 NHL Entry Draft, but earned an invite to training camp with the NHL’s Pittsburgh Penguins before an injury derailed those plans. Can he step up and provide a bigger offensive punch now that Gay and Zajac have left the building?

Prognosis: The Blades are going to rely heavily on a small contingent of players – Hajek, Hebig and Rubinchuk. Will Flodell and Hamm be steady enough to make up for the otherwise lack of depth on the blueline? With the likes of Brandon and Regina continuing to boast enviable depth in all areas while the Warriors unveil a new age of exciting talent, the Blades will be in a battle for a playoff position.

Keep your eyes on WHL.ca for more divisional previews this week. Next on the docket, we examine the WHL’s U.S. Division on Tuesday.