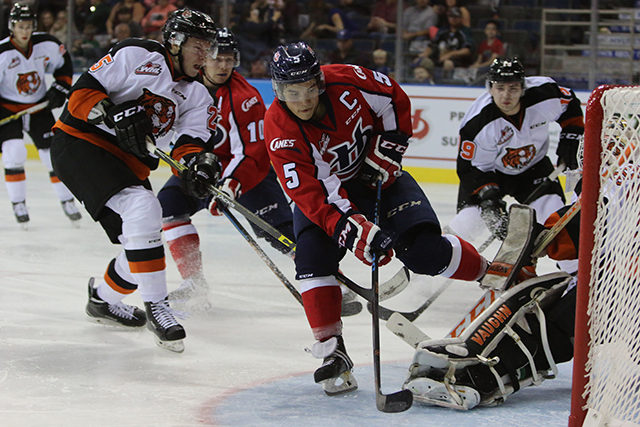 In our third divisional preview, we breakdown the Central Division, in order of standing from 2015-16.

Forwards: Burke, Wong and Estephan are set to return, while Babenko (29-40-69) is back with his speed down the wing… Veterans LW Cory Millette (34-30-64) and Justin Gutierrez (22-27-49) both had career years as overagers, but graduated from the WHL following 2015-16, so there will be some offense to replace there… C Jordy Bellerive (11-25-36) emerged during his rookie campaign and should have an opportunity to grow with added ice time… RW Jesse Zaharichuk (12-29-41) provides added offensive depth, coming over in an offseason trade from Kootenay…

Defence: LD Andrew Nielsen (18-52-70) leaves a gaping hole on the backend as he will graduate to the pro ranks within the NHL’s Toronto Maple Leafs organization… RD Arvin Atwal (11-39-50) also aged out, taking his snarl with him… Pankewicz will be leaned upon heavily to step up in the absence of both Nielsen and Atwal, while Brady Reagan (6-14-20) will also need to chip in… newcomer RD Brennan Menell (7-46-53) brings plenty of offensive acumen after a pre-season trade from Vancouver… Merezhko (0-10-10) returns, as does LD Nick Watson (0-1-1)… Will 16-year-old RD Calen Addison, the second overall pick from 2015, make the jump?

Player to Watch: Skinner has found his way onto plenty of NHL draft radars and will be key if the Hurricanes hope to repeat as Central Division champions. At 6-foot-4 and 195 pounds, the native of Edmonton doesn’t leave much for shooters to look at and last year he even proved he could put the puck in the net at the other end of the rink, becoming the first goaltender in franchise history to score a goal. Skinner is already being ranked as one of the top North American goaltenders heading into the 2017 NHL Entry Draft.

Prognosis: The Hurricanes just edged out Red Deer for the 2015-16 Central Division crown before being upset by Regina in the first round of the WHL Playoffs. Will Brent Kisio’s crew have learned some valuable lessons from last season’s first-round heartbreak? Will the high-flying Hurricanes be able to stave off the likes of Calgary and Red Deer in order to highlight their 30th anniversary campaign with a second consecutive division title? The usually tightly-contested Central Division is shaping up to be a race down to the wire once again.

Defence: Bobyk is the veteran presence, while RD Austin Strand (2-11-13) and LD Austin Shmoorkoff (0-3-3) return… LD Josh Mahura (0-1-1) is also a returner, though he battled injury all year long, only dressing for two regular season games before getting into 17 playoff contests, collecting two goals and four assists. After being selected by the NHL’s Anaheim Ducks (3-85), he will be relied upon to eat up some of the minutes left behind by the likes of Haydn Fleury, Nelson Nogier and Kayle Doetzel, all of whom have graduated…

Player to Watch: The Ducks liked Mahura enough to make him a third round pick, even after he only played a total of 19 games this past season. The Rebels blueline was a force to be reckoned with in 2015-16, boasting a group of big, nasty boys that could do damage at both ends of the rink. With Fleury, Nogier and Doetzel all out of the picture, Mahura has a great opportunity to prove he can be a reliable presence in the top four.

Prognosis: The Rebels loaded up as hosts of the 2016 MasterCard Memorial Cup and gave it a real good run. Now, a trio of offensive guns are gone and a trio of defensive beasts are also out of the picture. That being said, there are still plenty of quality pieces in place throughout the lineup. Will the Rebels be as much of a force as they were in 2015-16? It will all depend on how much the likes of Spacek, Musil, Mahura and company can pick up the slack. Regardless, Red Deer will be a playoff team come 2017.

Forwards: Fazleev graduates to the pro ranks within the NHL’s Philadelphia Flyers organization… A notable handful of veterans return, including LW Jakob Stukel (36-24-60), C Jordy Stallard (21-28-49), LW Carsen Twarynski (20-25-45), C Matteo Gennaro (18-25-43) and Beck Malenstyn (8-17-25), giving Calgary enviable experience up front… LW Mark Kastelic (5-5-10) represented Team USA at the Ivan Hlinka Memorial Cup this summer and should grow into a bigger role in his sophomore season… Rookie C Tristen Nielsen will look to make an impact in his first year after being drafted 20th overall in 2015…

Defence: Bean heads up the Hitmen blueline, which also welcomes back LD Jakob LaPointe (0-4-4), Zipp, RD Aaron Hyman (1-2-3) and LD Jaydan Gordon (1-5-6), who comes over from Swift Current… Gone to the pro ranks is Travis Sanheim and the menacing Keegan Kanzig… Colby Harmsworth also aged out… Entering the fray are youngsters RD Drea Esposito and LD Ty Prefontaine, as well as import Yeryomenko, who stacked up four goals and eight points in five pre-season games…

Player to Watch: The 17-year-old Yeryomenko landed with authority during pre-season action, managing four goals and eight points in only five games. Selected 46th overall at the 2016 CHL Import Draft, he won a gold medal with the Belarussian national team at the 2016 U18 D1A World Junior Championships. Now, he comes in as one of two new imports for Calgary, tasked with taking over from Fazleev and Pavel Karnaukhov. Both made an impact in their own way, setting the bar high.

Prognosis: With depth up front and arguably the best defender in the Central Division in Bean, the Hitmen are poised to take a run at the division title in 2016-17. Mix in some promising youth in the form of Kastelic and Nielsen, plus Yeryomenko on the back end, and the Hitmen will be tough to beat.

Defence: Quenneville leads the way after being selected by the NHL’s New York Islanders (7-200) at the 2016 NHL Entry Draft… He is joined by 20-year-old Kirichenko… Rugged captain Ty Stanton (5-32-37) has moved on to the pro ranks… RD Ty Schultz (3-10-13) and LD Brad Forrest (1-12-13) return, while Clouston is stuck in an overage logjam… At 6-foot-5 and 219 pounds, Kristian Rubins stands as the biggest body on the Tigers backend after being selected 16th at the 2016 CHL Import Draft…

Player to Watch: Shaw scored 60 points as a 17-year-old and is eligible for the 2017 NHL Entry Draft. Will he be able to build upon last year’s breakout campaign? At 5-foot-9 and 180 pounds, he isn’t the biggest player on the ice, but his skating ability and vision more than make up for that.

Prognosis: After finishing tied with Edmonton at the conclusion of the 2015-16 regular season, the Tigers lost a thriller in the tiebreaker game to be eliminated from post-season contention. With a deep group of returning players from top to bottom, Medicine Hat should find a way back to the playoffs in 2017.

Forwards: Losing Pollock is a blow as he is expected to turn pro within the NHL’s Calgary Flames organization… Captain Brandon Baddock (22-13-35) also turns pro within the NHL’s New Jersey Devils organization, leaving a leadership void… Bauer will need to assume greater leadership responsibilities while RW Davis Koch (9-14-23) and RW Colton Kehler (17-7-24) will need to factor more into the offense… LW Adam Berg (10-25-25) comes over via an offseason deal with Regina… LW Kobe Mohr (5-6-11), the 20th overall pick in 2014, will have an opportunity to grow into a bigger role…

Player to Watch: Can Bauer continue to trend upwards in his final year of junior eligibility? The 20-year-old native of Anchorage, Alaska, will need to be the Oil Kings top offensive threat in 2016-17 after posting career highs in all major offensive categories with 29 goals, 36 assists and 65 points.

Prognosis: There are some big holes to fill in Edmonton with a number of younger players in line to take the opportunity. The Oil Kings might not be the highest-scoring or most lethal time on a nightly basis, but they will battle to stay in the playoff picture.

Forwards: Zborosky and Alfaro will be the heart and soul of the offense as well as key cogs within the leadership group… C Noah Philp (6-16-22) will be relied up for more in his sophomore season, as will RW Max Patterson (7-3-10)… C Vince Loschiavo (4-6-1) and LW Jared Legien (4-4-8) had disappointing years and will need to step up… LW Dylan Stewart (4-6-10) showed flashes after coming over in a midseason deal from Prince Albert… 6-foot-4, 218-pound LW Barrett Sheen (4-8-12) enters the equation after coming to Cranbrook in the trade that sent Zaharichuk to Lethbridge… There will be plenty of fresh faces in Kootenay this season, including twin brothers RW Keenan Taphorn and LW Kaeden Taphorn…

Player to Watch: Zborosky has made no bones about his disappointment with being passed over at consecutive NHL drafts. Earning a camp invite from the NHL’s New York Rangers is one step in the right direction, but the Regina native will be motivated to earn a contract in his 20-year-old campaign. He’s the purest scorer on the roster and for a team that scored the fewest goals in the WHL, his touch will be vital.

Prognosis: The rebuild continues in Cranbrook and there is certainly plenty to be excited for in terms of young, promising talent coming down the pipe. First overall pick Peyton Krebs will be a star, but remains one year away. In the meantime, fans can be excited about the Taphorn twins and having a hometown product man the blue paint. Coach Pierce is known for having hard-working clubs and it will take a hard-nosed, black-and-blue effort for this ICE club to enter the playoff picture after a 12-win campaign. But with many players carrying an extra year of experience, who is to say Kootenay won’t surprise?

Keep your eyes on WHL.ca for one more divisional previews this week. We wrap things up by looking into the WHL’s B.C. Division on Thursday.