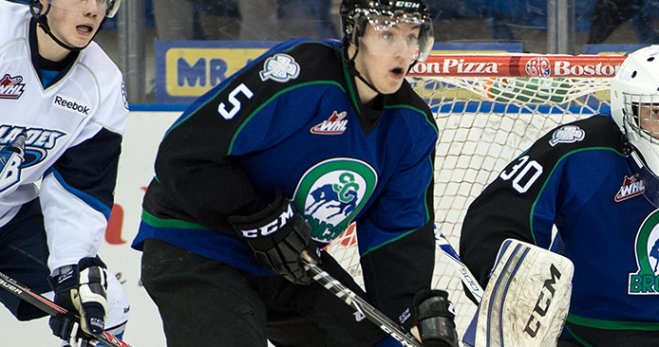 Calgary, AB – Leading up to the 2014 NHL Draft at the Wells Fargo Center in Philadelphia on June 27-28, WHL.ca and WHL Web TV, will highlight WHL players who are highly ranked by NHL Central Scouting leading up to draft day.  This week’s featured WHL player is Swift Current Broncos’ swift-skating defenceman Brycen Martin.

Brycen Martin just wrapped up his second season in the Western Hockey League with the Swift Current Broncos.  The Calgary, AB, product appeared in all 72 regular-season games for the Broncos in 2013-14, netting six goals and 31 assists for 37 points, finishing second among the team’s rearguards and eighth among all Broncos players in scoring.  Martin’s efforts on the blue line helped the Broncos make the playoffs for a second straight season.

An offensive-minded defenceman who skates extremely well, Martin is a smart, skilled player who can move the puck and generate offense.  Standing 6’2”, 185-lbs, Martin has the frame to play a physical game, but also has room to fill out and get stronger, meaning he should be able to withstand the rigors of life as an NHL defenceman.  Yet, Martin’s skills, skating and hockey sense are his biggest assets.  His outstanding skating ability allows him to move up and down the ice quickly, whether it’s joining the rush, carrying the puck up ice or getting back in the defensive zone.  Offensively, Martin’s ability to move the puck, his playmaking ability and his shot make him a dangerous player in the attacking zone particularly on the power play.

“His skating and his hockey sense are his biggest assets, and he’s probably one of the best, if not the best first-pass players in the League,” said Swift Current Broncos’ head coach and general manager Mark Lamb.

“His offensive instincts and the way he thinks the game very much make him an offensive player,” he said.  “When you have a high-end player, you can’t be one-dimensional, so we try and teach them the areas where they aren’t that strong, and I think Brycen has made strides in his play without the puck and on the defensive side of the game.”

Though the 18-year-old still has much to learn and plenty of developing to do, Martin has the talent and the skills that NHL teams look for in a defenceman.

“Brycen is a very appealing player because he’s one of those guys that you don’t often see make a mistake,” said Dan Marr, director of NHL Central Scouting.  “He’s got very good hockey sense, he’s a strong skater, and he moves the puck well…He’s got all the ingredients of today’s NHL defenceman.

“He’s not the kind of guy you’ll notice every night on the score sheet or on the highlight reels, but he’s just a really solid, effective player,” said Marr.

The Broncos’ first-round pick, 2nd overall, in the 2011 WHL Bantam Draft, Martin has built a strong hockey resume in his young career.  He played for Team Alberta in the 2011 Western Canada Under-16 Challenge Cup, helping the team capture a Gold medal, and also played for Team Canada at the 2012 Youth Olympic Games in Innsbruck.  Martin suited up for Team Pacific in the 2013 World Under-17 Hockey Challenge and attended the selection camp for Canada’s Under-18 team for the Memorial for Ivan Hlinka tournament.  He participated in the 2014 BMO CHL/NHL Top Prospects Game in his hometown of Calgary, suiting up for Team Orr.

Did you know…Martin led all defencemen and ranked tied for sixth in scoring with nine points at the 2013 World U-17 tournament…Martin joins Geordie Wudrick (2005) as the highest-drafted player at a WHL Bantam Draft in Broncos’ franchise history…Martin models his game after St. Louis Blues defenceman Alex Pietrangelo.