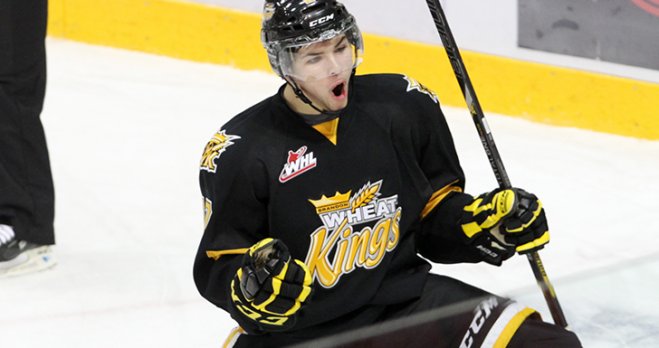 A talented forward who can score and create offense, Quenneville took big steps forward this season after posting eight goals and 19 points in 47 games as a 16-year-old rookie in 2012-13.  At 6’1”, 186-lbs, and with room to grown and get stronger, Quenneville has the size to attract NHL scouts’ attention. Quenneville uses his big frame and his strength effectively in protecting the puck and playing a physical game.  Perhaps his best assets are his puck skills, his offensive acumen, and his work ethic.  He has the skill to control the puck in the offensive zone, and distribute the puck quickly and effectively, and also boasts a good shot.  A good skater with strong balance, Quenneville also has a no-quit work ethic that helps him win puck battles.

“He’s a big, solid centerman who is real good in the offensive zone,” said Wheat Kings’ head coach and general manager Kelly McCrimmon.  “His skill with the puck is very good, and he sees the ice very well…he’s a tough guy to play against with his size and his ability to protect the puck, and he’s got a really good shot.”

What has most impressed McCrimmon about Quenneville is his desire to play the game and his desire to keep improving.  Quenneville’s game, says McCrimmon, has come a long way from where it was when he made his WHL debut at 16.  McCrimmon says that has also gotten the attention of NHL scouts, who see plenty of room for Quenneville to grow, learn and develop.

“He definitely made great strides in his development this season,” said McCrimmon.  “He got better as this season when on and he became one of our top scorers, which I know has made an impression.”

The Wheat Kings’ third-round pick, 54th overall, in the 2011 WHL Bantam Draft, Quenneville suited up for Team Alberta in the 2011 Western Canada Under-16 Challenge Cup, helping the team win Gold while co-leading the team with five assists.  He also played for Team Pacific in the 2012 World Under-17 Hockey Challenge, and most recently won a Bronze medal with Canada’s Under-18 team at the 2014 U-18 World Championship.

Did you know…Quenneville is the second cousin of Chicago Blackhawks’ head coach Joel Quenneville…John played alongside his older brother, Peter, with the Wheat Kings this season…John and Peter have another younger brother, David, who was a first-round Bantam Draft pick of the Medicine Hat Tigers in 2013…Quenneville models his game after Los Angeles Kings forward Anze Kopitar.