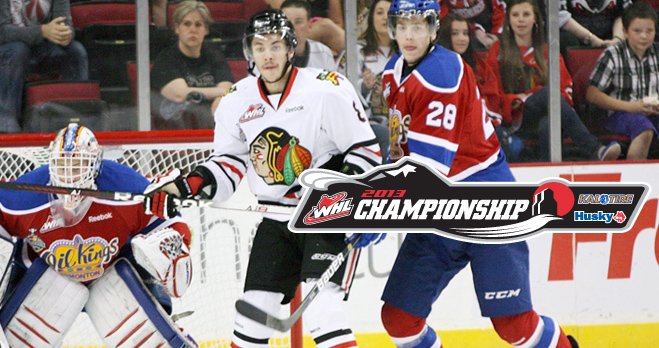 The Oil Kings and Winterhawks will meet up once again to square off in a best-of-seven series for the chance to hoist the Ed Chynoweth Cup.  Last year, Edmonton got the best of Portland in a thrilling seven-game series, defeating the Winterhawks 4-1 in Game 7 at Rexall Place in Edmonton, AB, to capture the 2012 WHL Championship.

Here’s a look at the 2013 WHL Championship series match-up:

Michael St. Croix scored the winner on a power play with just 1:03 to play in the third period as the visiting Edmonton Oil Kings edged the Portland Winterhawks 4-3 in their only regular-season meeting on February 27th, in Portland, OR.

Travis Ewanyk, Dylan Wruck and Trevor Cheek also scored for the Oil Kings, who trailed the contest 3-1 through most of the second period but rallied for three straight goals to earn the win.  Laurent Brossoit turned aside 26 of 29 shots to post the win.

Troy Rutkowski, Nic Petan and Taylor Leier also scored while Ty Rattie chipped in a pair of assists for the Winterhawks, who were outshot 42-29 by the visiting Oil Kings.  Mac Carruth made 38 saves in the loss.

The 2012-13 edition of the Winterhawks has proven to be the most successful edition of the team in franchise history, at least during the regular season when they posted a franchise record 57 wins and 117 points.  An offensively dominant Club with a tireless work ethic and tremendous skill up front and on the back end and solid goaltending, the Winterhawks don’t appear to have any glaring weaknesses.  The Hawks can win through their high-octane offensive talent or by smothering and simply out-working their opponent.

Led by Ty Rattie, the MVP of the Kal Tire WHL Western Conference Championship series, the Winterhawks ice a talented offense that can strike like lightning.  Coming off another 100-point regular-season, Rattie has taken his game to another level in the playoffs, averaging a goal per game and over two points per game.  Now ranked second on the WHL’s list of career playoff goals, Rattie continues to show he’s one of the WHL’s all-time best in the post-season.  Nic Petan and Brendan Leipsic shared the WHL scoring lead during the regular season, and have both put up better than a point per game in the playoffs.  They will need to take another step forward to help the Hawks find success against a solid, physical Oil Kings defence.  Secondary scoring will need to come from the likes of Taylor Leier, Oliver Bjorkstrand and Chase De Leo, who have already combined for 16 goals and 42 points in the playoffs.

Defensively, the Winterhawks have kept their goals-against to under two goals per game on average in the playoffs, and have posted four shutouts through their first 15 games.  The Hawks’ top four blue liners – Seth Jones, Troy Rutkowski, Derrick Pouliot and Tyler Wotherspoon – have been dominant in the post-season, combining for 14 goals, 48 points and a +37 rating.  With plenty of size, strength and skill, the Hawks’ defence corps should be able to handle Edmonton’s depth and talent up front while continuing to contribute to the offense.

Mac Carruth has enjoyed a strong run through the first three rounds of the playoffs for the Winterhawks.  The 20-year-old from Shorewood, MN, boasts a WHL-leading 1.62 goals-against average and a stellar .935 save percentage through 15 games while also posting four shutouts.  Now making his third straight appearance for the Hawks in the WHL Championship series, Carruth has seen more playoff action than any other goaltender in WHL history.  Having been on the losing end twice in the WHL Championship series, including to the Oil Kings last year, Carruth won’t need any extra motivation for putting on his best performances in the 2013 final.

The Edmonton Oil Kings are making their second consecutive appearance in the WHL Championship series, and come into the series as the defending WHL champions.  Having defeated Portland in last year’s final, the Oil Kings will aim to make it two in a row over the Winterhawks in the battle for the Ed Chynoweth Cup.

The Oil Kings enjoyed another dominating season, finishing first in the Central Division and Eastern Conference for a second straight year, and continued their strong play through the first three rounds of the playoffs.  With plenty of depth and talent up front, an incredibly tough and stingy defence corps, and one of the WHL’s top goaltenders manning the crease, the Oil Kings aim to become the first back-to-back WHL Champions since the Kamloops Blazers in 1994 and ’95.

Up front, Edmonton boasts plenty of talent and depth.  Veterans Husky WHL Eastern Conference Championship series MVP Michael St. Croix, Stephane Legault and Henrik Samuelsson have paced the attack.  St. Croix, a New York Rangers prospect, continues to show he’s a big-game performer after netting two goals in the Oil Kings’ Game 7 win over Calgary in the Eastern Conference Championship series.  Scoring depth up front lies in 20-year-old Trevor Cheek, 18-year-old Curtis Lazar, 18-year-old Edgars Kulda and 20-year-old Dylan Wruck, who have combined for 19 goals and 54 points in the post-season.  On top of their talented forwards, the Oil Kings can generate scoring from the back end as well through the likes of Martin Gernat, Cody Corbett and Keegan Lowe.  Aside from their offensive acumen, the Oil Kings’ forwards are tenacious workers, making life incredibly difficult for the opposition.

Defensively, the Oil Kings have been as solid as ever in their own zone, giving up just 25 goals in 16 games while posting five shutout wins.  Keegan Lowe, Edmonton’s captain, and Edmonton Oilers prospect David Musil will be challenged to slow down Portland’s top trio of Ty Rattie, Brendan Leipsic and Nic Petan.  Edmonton will be without the services of 18-year-old Griffin Reinhart, who suffered an injury in the conference championship series.  Reinhart’s presence will be missed, considering he was so instrumental in the Oil Kings’ WHL Championship series win over Portland last year.  The Oil Kings’ penalty killing unit was near impenetrable over the first two rounds of the playoffs, but was exposed versus a strong Calgary power play in the third round.  They will need their penalty kill to be at its best if they are to limit Portland’s effective power play.

After being nearly unbeatable through the first two rounds, goaltender Laurent Brossoit experienced some ups and downs in the Husky WHL Eastern Conference Championship series versus Calgary. However, came up with a clutch shutout performance in their Game 7 victory over the Hitmen.  Brossoit, a Calgary Flames prospect, continues to lead all WHL goaltenders in goals-against and save percentage in the playoffs.  The 19-year-old was outstanding versus Portland in last year’s WHL Championship series, and will need to match that level of play if the Oil Kings are to have success.