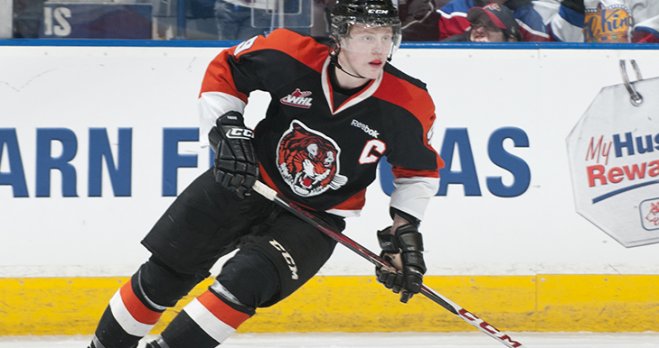 Hunter Shinkaruk just completed his third season in the WHL with the Medicine Hat Tigers.  The Calgary, AB, product scored 37 goals and registered a team-high 49 assists for 86 points in just 64 games for the Tigers during the 2012-13 WHL regular season, helping the team make the playoffs for an 11th straight year while being named to the WHL Eastern Conference Second All-Star Team.

One of the WHL’s most exciting players to watch, Shinkaruk is a gifted offensive winger with great speed and a nose for the net, having piled up 100 goals and 219 points over 193 career regular-season games.  The 18-year-old boasts outstanding puck skills, great vision and hockey sense and exhibits strong creativity in the offensive zone, making him one of the most dangerous offensive threats in the WHL.  Shinkaruk owns a strong and accurate wrist shot, which he can use to score off the rush or from in the slot, and he always manages to find space in good scoring areas.  His quick feet and agility allow him to create separation and help make him an elusive forward to contain.  As good of a scorer as he is, Shinkaruk’s passing skills and vision make him equally effective as a playmaker.  Though not the biggest player on the ice, Shinkaruk doesn’t hesitate to involve himself physically nor does he shy away from the tough areas of the ice.

“With Hunter, it’s about speed and scoring combined with a competitive drive that makes him stand out,” said Dan Marr, the director of NHL Central Scouting.  “This is the guy you want on the ice when you need a goal or to generate offense, and he’s a guy who can change the direction of a game with his skillset and hockey sense.”

His on-ice skillset is obvious to anyone who has seen Shinkaruk play.  However, the 5’11”, 175-lb forward brings a highly competitive attitude and a will to do whatever it takes to help his team win that is nearly unrivaled.  His character, says Clouston, is something that sets Shinkaruk apart from others and adds to his desirability as a top prospect.

“He is a guy that has a ton of positive energy, he can electrify the crowd with his play, and he’s always got a smile on his face,” said Tigers’ general manager and head coach Shaun Clouston, who has watched Shinkaruk develop since coming into the WHL just shy of his 16th birthday three seasons ago.

“He loves the game of hockey, loves to practice and play games, loves to score goals and loves to win,” said Clouston.  “I’ve been around with the Tigers for a long time, and have seen a lot of great players move on to the next level like the Kris Russells, the Tyler Ennis’, the Darren Helms and the Clarke MacArthurs, and they all have that determination, that belief that they will make it to the NHL, and that’s what Hunter has in him.

“He loves the game, he’s worked at it, and he’s enjoyed the process to get here, but he’s got that belief that his destiny is to get to the NHL, and that’s what he is going to do,” he said.

The Tigers’ first round pick, 14th overall, in the 2009 WHL Bantam Draft, Shinkaruk has represented Canada at the Under-17 level as a member of Team Pacific in the 2011 World U-17 Hockey Challenge, helping the team win Bronze.  He also played for Canada’s Under-18 team at the 2011 Memorial for Ivan Hlinka tournament, winning a Gold medal, and in the 2012 Under-18 World Championship.  One of the final cuts for the 2013 Canadian national junior team, Shinkaruk played for Team WHL in the 2012 SUBWAY Super Series and was chosen to participate in the 2013 Home Hardware CHL / NHL Top Prospects game, but could not due to injury.

Did you know…Shinkaruk missed his entire 15-year-old Midget season recovering from a broken leg…Shinkaruk cites Sidney Crosby as a player he models his game after for his work ethic, skill and leadership abilities…Shinkaruk and linemate Emerson Etem combined for a whopping 110 goals during the 2011-12 season, accounting for over 43% of the Tigers’ entire offensive output that season.