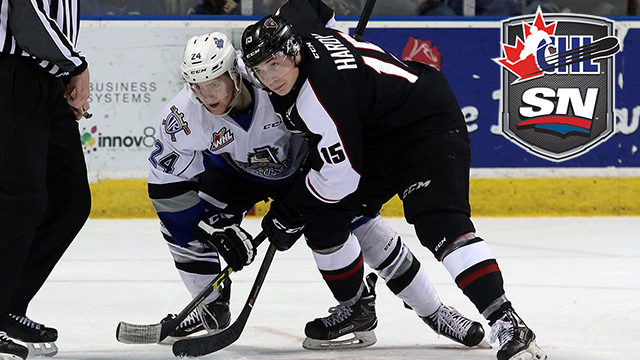 The Victoria Royals will look to bolster their playoff positioning when they visit the Vancouver Giants on Friday Night hockey on Sportsnet.

Owners of the first wild card seed in the Western Conference, the Royals have the Portland Winterhawks breathing down their necks, only one point back in the second wild card seed. Ahead of Victoria, recent runs by the Kamloops Blazers and Kelowna Rockets has put some distance between third and fourth place in the B.C. Division, but what exists is a six-point gap the Royals could potentially close in coming weeks.

It’s been nearly a week since the Royals last played, skating to a 4-1 win over the Kootenay ICE in Cranbrook on Feb. 18. Matthew Phillips had a goal and an assist, while defenceman Scott Walford recorded three helpers in the win. Rookie Dylan Myskiw made 26 saves between the pipes.

As for the rebuilding Giants, the post-season is out of the question at this point with a 25-point void exists between Vancouver and the second wild card. Having only 12 games and 24 possible points remaining on their schedule, the Giants continue to look to the future.

Last time out, the Giants scraped out a 4-3 shootout win over the Red Deer Rebels Feb. 18. Tyler Popowich provided the game-tying goal in the third period before Ty Ronning and Jack Flaman scored in the shootout the secure the victory. Ryan Kubic made 35 saves to backstop his club.

Ronning is enjoying a strong campaign after being drafted in the seventh round (201st) of the 2016 NHL Draft by the New York Rangers. Through 56 games, the 5-foot-9 product of Burnaby, B.C., has tallied 45 points (22G-23A) to lead the Giants in scoring.

Speaking of strong campaigns, Phillips having himself some kind of year, following up on last season’s WHL Rookie of the Year performance. The Calgary Flames prospect leads the Royals in scoring with 72 points (42G-30A) in 58 games.

Griffen Outhouse maintains the Victoria crease and sits among WHL leaders in a number of major goaltending categories, including fourth in GAA (2.65), fourth in SV% (.921), tied for second in wins (30) and third in shutouts (four). The 18-year-old product of Williams Lake, B.C., is 30-20-3-1 in 54 outings this season.

Friday marks the seventh of 10 outings this season between the Giants and Royals as well as the first of three straight contests between the two B.C. Division rivals. Following Friday’s date in Vancouver, the two teams will head over to the Island for back-to-back outings Saturday and Sunday.

This is the second time this season the Giants and Royals have played three-in-three against one another. From Jan. 27-29, they went toe-to-toe on three occasions with Victoria winning all three, the last of which was a 6-3 decision that saw Tyler Soy score four goals.

The two teams close out their regular season series March 14 back in Vancouver.

PRE-GAME REPORT: The boys host @victoriaroyals tonight at 7:30 at @LangleyEvents!

The Royals open up the weekend series tonight in Vancouver! Puck drop again the Giants is at 7:30 pm!