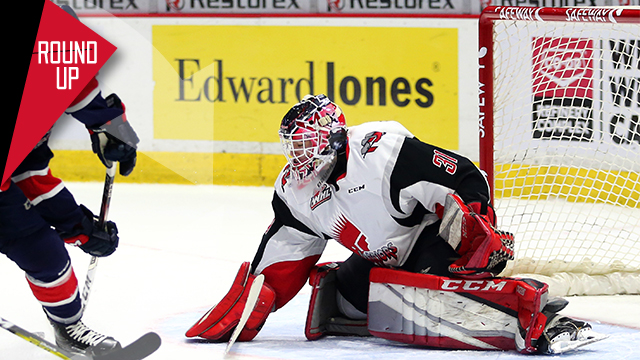 Ian Scott made 33 saves, backstopping the Prince Albert Raiders to a 4-1 win over the Brandon Wheat Kings Saturday night.

Austin Crossley, Cavin Leth and D-Jay Jerome scored over the course of the opening 40 minutes to give the Raiders a 3-0 lead before Reid Duke’s 33rd of the season made it a 3-1 game midway through the third period.

Parker Kelly iced the victory in the late stages of the third period.

The win served as Scott’s eighth of the season.

Raiders knock of the Wheat Kings in Brandon for their sixth road win in the last eight games.

Jack Walker’s 25th goal of the season came 8:03 into the second period and broke a 1-1 tie, eventually standing as the game-winning marker for the Victoria Royals in a 4-1 win over the Kootenay ICE Saturday night.

Dylan Myskiw made 26 saves for his second win of the season.

That’s it folks! @Dylanmyskiw made 26 saves, while Jack Walker tallied the GWG in a 4-1 victory over the Kootenay ICE!

Matt Alfaro recorded a hat trick along with four points as the Lethbridge Hurricanes defeated the Saskatoon Blades by a 6-2 margin Saturday night.

Alfaro wasn’t the only ‘Canes veteran to demolish the scoresheet Saturday night, as both Tyler Wong (1G-3A) and Zak Zborosky (1G-3A) tallied four points as well.

Alfaro scored on the power play in the first period and at even strength in the second period before rounding out his night with a short-handed effort in the third period. The performance got the overage forward to 18 goals on the season.

Wong earned his 42nd goal of the season, while Zborosky notched his 38th. Brady Pouteau recorded the other marker for Lethbridge while Logan Christensen and Tyler Lees replied for the Blades.

Ryan Gilchrist made 22 saves for his sixth win of the season.

The two forwards each notched their 28th goals of the season in the first period before Trey Fix-Wolansky scored two of his own – his 18th and 19th of the year – to tie the game 2-2.

Chad Butcher, Bradley and Rassell rattled off three goals in a row through the final three minutes of the second period to give the Tigers a 5-2 advantage after 40 minutes. James Hamblin and Max Gerlach piled on in the third period.

Fix-Wolansky completed the hat trick early in the third period while Davis Koch provided the other marker for the Oil Kings.

Nick Schneider made 14 saves for his 30th win of the season.

Zach Sawchenko made 37 saves, backstopping the Moose Jaw Warriors to a 4-0 victory over the Regina Pats on WHL on Access7 Saturday night.

Josh Brook scored the game-winning goal on a power-play opportunity with 2:21 remaining in the first period.

For Sawchenko, he earned his 23rd win and second shutout of the season.

Ethan Bear scored twice and collected two assists to boost the Seattle Thunderbirds past the Portland Winterhawks by a 5-3 margin Saturday night.

But Donovan Neuls tied the game 3-3 before the midpoint of the third period and Tyler Adams provided the game-winner with 6:47 to go in regulation. Ryan Gropp notched his 25th of the season to add insurance.

Rylan Toth made 25 saves for his 31st victory of the season.

The game required overtime after Glenn Gawdin scored his second of the night with 1:33 to go in regulation, tying the game 2-2.

Noah Juulsen and Devon Skoleski provided the other markers for the Silvertips.

Carter Hart made 27 saves for his 25th win of the season.

Evan Sarthou made 38 saves, backstopping the Tri-City Americans to a 5-1 win over the Spokane Chiefs Saturday night.

Juuso Valimaki and Tyler Sandhu each recorded a goal and an assist, while Dylan Coghlan and Morgan Geekie collected a pair of assists each.

Kailer Yamamoto’s 34th of the year was the lone tally for the Chiefs.

Parker AuCoin, Nolan Yaremko and Brett Leason also scored for the Americans, who went 3-for-5 on the man advantage and added a short-handed marker for good measure.

The win was Sarthou’s eighth of the season.

Ryan Kubic made 35 saves plus two more in the shootout as the Vancouver Giants scrounged a 4-3 win over the Red Deer Rebels Saturday night.

Owen Hardy opened the scoring 56 seconds into the affair before Lane Zablocki and Akash Bains scored back-to-back on the Rebels’ first two shots of the game, chasing starting goaltender David Tendeck from the game as Kubic was beckoned from the bench.

Ty Ronning tied the game 2-2 with only six seconds to go in the second period. Then it was Zablocki’s second of the night putting Red Deer back in front early in the third period. Tyler Popowich provided the tying marker midway through the period.

The win was the 15th of the season for Kubic.